As Boris Johnson on Thursday announced that his innings at 10 Downing Street will soon end, his term as British prime minister will be remembered for setting the India-UK relations on the course of a "comprehensive strategic partnership". 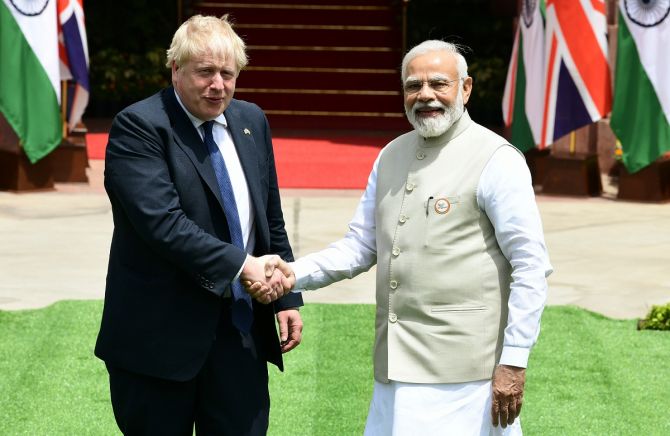 Widely seen as an enthusiastic cheerleader for closer ties with India, Johnson had a palpably close bond with Prime Minister Narendra Modi -- someone he would often refer to as his special friend or khaas dost.

The two prime ministers famously pledged to achieve a 'quantum leap' in the bilateral relationship as they clinched an “enhanced trade partnership” as part of the 2030 UK-India Roadmap in May last year, with the aim of at least doubling bilateral trade by 2030 from around GBP 24 billion.

This marked the starting gun for the ongoing free trade agreement negotiations, with a deadline for a draft agreement by Diwali this year agreed during Johnson's visit to India in April.

“This could double our trade and investment by the end of the decade, driving down prices for consumers, and increasing wages across the UK by as much as GBP 3 billion,” said Johnson, with reference to the FTA.

“India is an incredible rising power in Asia, with one of the fastest growing economies in the world -- already worth GBP 2.25 trillion -- and set to be the world's third largest economy by 2050. India is also our biggest partner in the Indo-Pacific, which is increasingly the geopolitical centre of the world, with two-thirds of humanity, and a third of the global economy -- and that share is rising every year,” Johnson said, during his India visit.

But domestic pressures of the partygate scandal of COVID law-breaking parties within UK government offices followed Johnson to India, even as he tried to enjoy a grand welcome in Gujarat before his meeting with Modi in Delhi.

“Our new and expanded defence and security partnership will enable India to strengthen its own domestic defence industry as well as protecting vital shared interests in the Indo-Pacific,” said Johnson after that meeting.

His visit to India followed a few cancelled plans since he took office in July 2019 due to the coronavirus pandemic crisis, with the two leaders holding several virtual talks and eventually meeting in person on the sidelines of the COP26 climate summit in Glasgow last November.

Controversy has never been far behind with Johnson, including when his enthusiastic images riding a JCB digger during a factory visit in Gujarat came under fire over the equipment's use in a controversial 'anti-encroachment' drive in Delhi. He sought to dismiss the controversy and flagged the factory as a 'living, breathing incarnation of the umbilicus between the UK and India.'

Given that Johnson came to power as the pro-Brexit prime minister who formally oversaw Britain's exit from the European Union, his lasting legacy will be the UK's so-called 'Indo-Pacific tilt' with an integrated review launched in Parliament last year.

The post-Brexit review formally set out the UK's “Global Britain” foreign policy agenda, with countries such as India, Japan and Australia at the heart of this vision. Its physical manifestation was the UK's Carrier Strike Group, led by aircraft carrier HMS Queen Elizabeth, sailing to India for joint exercises with Indian military forces in the Indian Ocean in October last year.

“The world is tilting on its economic axis and our trade and relations with the Indo-Pacific region are becoming ever more vital than ever before,” declared Johnson. Among some of Boris Johnson's recent highlights of the India-UK partnership is the successful vaccine partnership struck between Oxford University and AstraZeneca and the Serum Institute of India for the manufacture of COVID vaccines as Covishield.

“The Oxford vaccine has been distributed at cost around the world; more than a billion low-cost vaccines have been invented in Britain, saving millions of lives,” he said. Many of these highlights will leave a lasting stamp on India-UK relations and, as ministers have often said, the bilateral partnership is now believed to be strong enough to cut across government-specific ties. 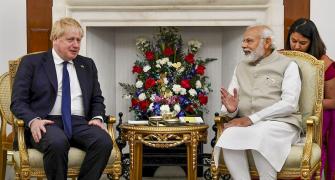 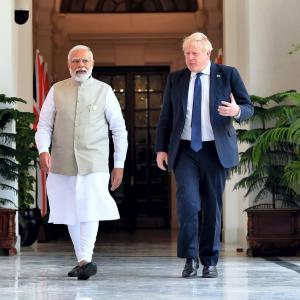 Johnson quits, to stay on till new UK PM is chosen