News
Business
Movies
Sports
Cricket
Get Ahead
Money Tips
Shopping
Sign in  |  Create a Rediffmail account
Rediff.com  » News » Our relationship has overcome hesitations of history: Modi to US Congress

Our relationship has overcome hesitations of history: Modi to US Congress 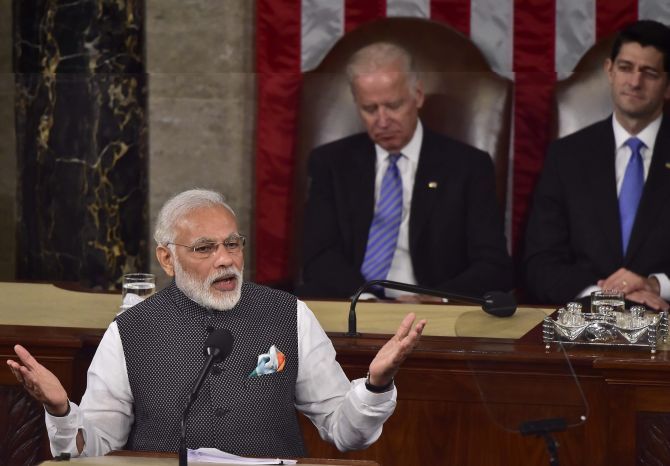 With Pakistan obviously in mind, Prime Minister Narendra Modi on Wednesday said terrorism is being ‘incubated in India’s neighbourhood’ and pressed for action without making any distinction against groups like Lashkar-e-Tayyaba, Taliban and the Islamic State who share the ‘same philosophy of hate, murder and killings’.

In his address to the joint sitting of US Congress, he said terrorism has to be fought with ‘one voice’ as he commended the American Parliament for sending out a clear message by refusing to ‘reward’ those who preach and practice terrorism for political gains, an apparent reference to the blocking of sale of 8 F-16 fighter jets to Pakistan.

In the course of his 45-minute speech, he covered all major aspects of the growing relationship between India and the US, particularly strategic ties and civil nuclear cooperation, and emphasised that the two countries should leave ‘constraints of the past’ behind as the ‘foundations of the future are firmly in place’. He, however, said that ‘today, our relationship has overcome the hesitations of history’.

Dressed in trademark white kurta-pyjama and grey-coloured half-jacket, Modi was warmly received by the American lawmakers who interrupted his address more than 40 times to cheer him, a few times by standing. When his predecessor Manmohan Singh addressed the US Congress in 2005, his speech was applauded 33 times, according to Sanjay Baru, who was the Media Adviser to the then Prime Minister.

Underscoring that both India and the US share the vision of peace and prosperity of the world, the Prime Minister said ‘globally, terrorism remains the biggest threat’ and it must be fought at many levels" as the traditional tools of military, intelligence or diplomacy alone would not be able to win defeat it.

“In the territory stretching from West of India's border to Africa, it may go by different names, from Laskhar-e-Tayyaba, to Taliban to ISIS. But, its philosophy is common: of hate, murder and violence,” Modi said.

“Although its shadow is spreading across the world, it is incubated in India’s neighbourhood,” he said an apparent reference to Pakistan.

He said those who believe in humanity must come together to fight against terrorism as one and speak against this menace in one voice.

“I commend the members of the US Congress for sending a clear message to those who preach and practice terrorism for political gains,” Modi said, adding, “Refusing to reward them is the first step towards holding them accountable for their actions.”

He was clearly referring to the blocking of sale of 8 F-16 fighter jets to Pakistan by the US Congress recently.

Emphasising that ‘terrorism must be delegitimised’, he said, “The need of the hour is for us to deepen our security cooperation.”

He said the cooperation should be based on a policy that ‘isolates those who harbour, support and sponsor terrorists; that does not distinguish between ‘good’ and ‘bad’ terrorists; and that de-links religion from terrorism’. The prime minister noted that both the countries have lost civilians and soldiers in combating terrorism and highlighted how the US stood by India in the aftermath of terror attack in Mumbai in November 2008, which originated from Pakistan.

Observing that India-US ‘relationship is primed for a momentous future’, the prime minister said a strong partnership between the two countries can anchor peace, prosperity and stability from Asia to Africa and from Indian Ocean to the Pacific.

“It can also help ensure security of the sea lanes of commerce and freedom of navigation on seas,” he said, adding India is already assuming its responsibilities in securing the Indian Ocean region.

He used the occasion to pitch apparently for the United Nations reform as he said, “But the effectiveness of our cooperation would increase if international institutions, framed with the mindset of the 20th century, were to reflect the realities of today.”

Modi, who invoked Martin Luther King, Mahatma Gandhi, Swami Vivekananda and Atal Bihari Vajpayee in his speech, said India and the US, the world’s largest and oldest democracies, had learnt a lot from each other's philosophies and practices, making them ‘natural allies’.

“As we deepen our partnership, there would be times when we would have differing perspectives. But, since our interests and concerns converge, the autonomy in decision making and diversity in our perspectives can only add value to our partnership,” he said, adding, “So, as we embark on a new journey, and seek new goals, let us focus not just on matters routine but transformational ideas.”

He said these ideas should focus ‘not just on creating wealth but also creating value for our societies; not just on immediate gains but also long term benefits; not just on sharing best practices but also shaping partnerships; and not just on building a bright future for our peoples, but in being a bridge to a more united, humane and prosperous world’.

“And, important for the success of this journey would be a need to view it with new eyes and new sensitivities. When we do this, we will realise the full promise of this extraordinary relationship,” he said.

Highlighting India's growth of 7.6 per cent and the immense opportunities it offers, the prime minister said, “In every sector of India’s forward march, I see the US as an indispensable partner.”

He noted that many Americans believe that a stronger and prosperous India is in the strategic interest of the US and said, “Let us work together to convert shared ideals into practical cooperation. There can be no doubt that in advancing this relationship, both nations stand to gain in great measure.”

As the US businesses search for new areas of economic growth, markets for their goods, a pool of skilled resources, and global locations to produce and manufacture, India could be their ideal partner, Modi said.

He said transformative American technologies in India and growing investment by Indian companies in the United States both have a positive impact on the lives of the citizens of the two countries. 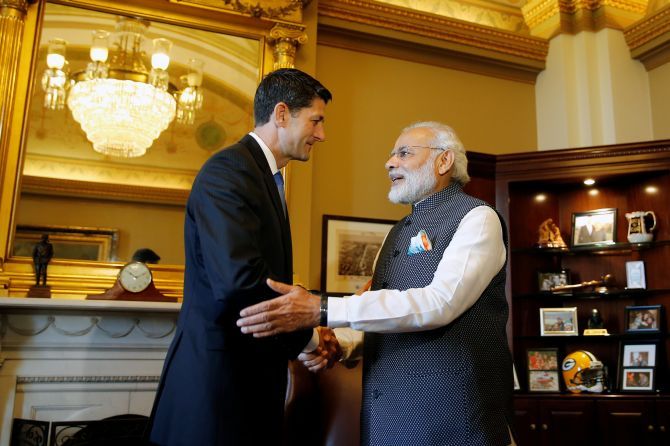 Talking about the commonalities, the PM told the American lawmakers that like in the US Congress, Indian Parliament also reflects a spirit of bipartisanship.

“I am informed that the working of the US Congress is harmonious. I am also told that you are well-known for your bipartisanship. Well, you are not alone. Time and again, I have also witnessed a similar spirit in the Indian Parliament, especially in our Upper House. So, as you can see, we have many shared practices,” he said.

While mentioning about the ties between India and the US, Modi said the pioneers had shaped a development partnership very early on, ‘even when the meeting ground was more limited’, with the genius of Norman Borlaug bringing the Green Revolution and food security to India.

“Fast forward to today. The embrace of our partnership extends to the entirety of human endeavour-from the depths of the oceans to the vastness of the space....Ties of commerce and investment are flourishing. We trade more with the US than with any other nation. And, the flow of goods, services and capital between us generates jobs in both our societies.

“As in trade, so in defence. India exercises with the United States more than we do with any other partner. Defence purchases have moved from almost zero to 10 billion dollars (Rs 6,70,000 crore) in less than a decade.

“Our cooperation also secures our cities and citizens from terrorists, and protects our critical infrastructure from cyber threats. Civil Nuclear Cooperation, as I told President Obama yesterday, is a reality,” Modi said.

Noting that the 21st century has brought with it great opportunities, he said it also comes with its own set of challenges.

“Inter-dependence is increasing. But, while some parts of the world are islands of growing economic prosperity; other are mired in conflicts,” he added.

Talking in the context of Asia, Modi said the absence of an agreed security architecture creates uncertainty. “Threats of terror are expanding, and new challenges are emerging in cyber and outer-space. And, global institutions conceived in 20th century, seem unable to cope with new challenges or take on new responsibilities,” the prime minister said.

“In this world full of multiple transitions and economic opportunities, growing uncertainties and political complexities, existing threats and new challenges, our engagement can make a difference by promoting cooperation not dominance; connectivity not isolation; respect for global commons; inclusive not exclusive mechanisms; and above all adherence to international rules and norms,” he said.

He said India and the US may have been shaped by differing histories, cultures, and faiths ‘yet our belief in democracy for our nations and liberty for our countrymen is common. The idea that all citizens are created equal is a central pillar of the American constitution’.

Modi said the founding fathers of the two countries too shared the same belief and sought individual liberty for every citizen of India.

“There were many who doubted India when, as a newly independent nation, we reposed our faith in democracy. Indeed, wagers were made on our failure. But, the people of India did not waver,” he said.

“Our founders created a modern nation with freedom, democracy, and equality as the essence of its soul. And, in doing so, they ensured that we continued to celebrate our age old diversity. Today, across its streets and institutions, in its villages and cities, anchored in equal respect for all faiths; and in the melody of hundreds of its languages and dialects. India lives as one; India grows as one; India celebrates as one,” Modi said.

The prime minister hailed the US Congress, describing it as a ‘temple of democracy’ from which democracies world over had learnt.

“It manifests the spirit of this great nation, which in Abraham Lincoln’s words, ‘was conceived in liberty and dedicated to the proposition that all men are created equal’,” he said, adding that the opportunity to address it was ‘honouring the world’s largest democracy and its 1.25 billion people’.

After addressing the US Congress, a reception was hosted for Modi jointly by the Foreign Relations Committees of the House of Representatives and the Senate as well as the India Caucus.

Speaking at the reception, he said that whenever he met any Senator or Congressman, he felt the warmth that goes beyond diplomacy and saw a desire to see what the two countries can do to preserve the values for the benefit of the world.

He said there was a time when there was curiosity in America about what India is.

Then came the time when US started recognising India, to realise there are a lot of shared values which can build on relationship, he said.

Subsequently, the time came when the two countries started thinking about how the ties can be advanced for each other.

Now the two countries are stepping into an era in which they think beyond what each can get from the other to see ‘what we can do together for the world. Be it climate change, terrorism, poverty, healthcare, there numerous, together we can find solutions,’ he said.