Prime Minister Narendra Modi witnessed the spectacular Ganga 'aarti' in Varanasi on Monday evening while on board a river cruise with chief ministers of Uttar Pradesh and other Bharatiya Janata Party-ruled states. This was the prime minister's third engagement in the holy city after visiting the Kal Bhairav temple and inaugurating the Kashi Vishwanath Dham earlier in the day.

Modi boarded the Swami Vivekananda cruise at Sant Ravidas Ghat to witness the evening 'aarti' on the banks of river Ganga that were illuminated by thousands of diyas. M V Vivekananda took the special guests on a memorable journey as it cruised along the illuminated ghats, offering spectacular views of the holy city.

Thousands of people gathered at various ghats to catch a glimpse of the 'aarti' and the prime minister.

People cheered and chanted 'Har Har Mahadev' when the cruise halted at the Dashashwamedh Ghat, famous for its daily 'aarti'.

Priests chanted hymns, bells clanged and the sound of conch added to the divine ambience. Varanasi district magistrate Kaushal Raj Sharma had on Sunday said that after inaugurating the newly built Kashi Vishwanath corridor, Prime Minister Modi will take part in an informal meeting with several chief ministers on board the river cruise in the evening and witness Ganga 'aarti' and grand festivities at Varanasi ghats.

The prime minister, who is also the member of Parliament from Varanasi, had expressed his desire to "showcase the grandeur of Kashi" to the chief ministers, he had said. 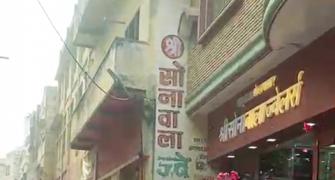 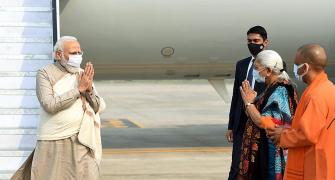 PIX: What Modi wore in Varanasi