Gujarat Chief Minister Narendra Modi on Friday visited two villages in Junagadh district which were among the affected in Thursday night's earthquake.

A quake measuring 5.3 on the Richter scale had shaken the state on Thursday night, the epicenter of which was 20km south east of Sasan Gir near Vansthli town in Junagadh district.

Modi visited Laudali and Jalandhar villages, the two most-affected places in the district and met the victims and listened to their accounts.

"Around 15 villages in two talukas of Talala and Maliya Hatina are among the places where houses and other buildings have been damaged," Modi said.

"When there is a quake of more than five magnitude, there is always some anxiety. But, fortunately, there was no loss of life," Modi said.

The chief minister said the state government had immediately swung into action after the quake and the disaster management control room was put on high alert.

"Now, the government has decided to take up a survey of the damages caused by the quake. The survey will be completed soon, on the basis of which financial assistance will be given to the quake-affected people," Modi added.

Last night's tremor was felt as far as Ahmedabad, south Gujarat and Mumbai.

Around 8.45 am on Friday morning, an aftershock measuring 4.1 on Richter scale was felt in and around Junagadh district. 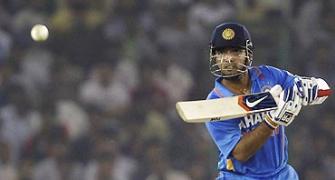