Source: PTI
September 29, 2011 21:41 IST
Narendra Modi will be skipping the two-day national executive of Bharatiya Janata Party to be held in New Delhi from Friday, indicating that all may not be well between the Gujarat chief minister and the party.

"The chief minister is not going to Delhi to take part in the BJP national executive meeting. This is not the first time that Modi is not attending such a meeting," a source in the chief minister's office told PTI.

The development comes after his chief mentor L K Advani announced a rath yatra against corruption from Bihar, to be flagged off by the state's Chief Minister Nitish Kumar, who had not allowed Modi to campaign in that state during the last assembly elections there.

"He has also undertaken the fast of Navratri, and he does not go out during the fast," the CMO source said.

"The chief minister will attend a meeting of Somnath Trust on Friday, and other routine meetings," an official said.

The national executive is likely to discuss the plan of Advani's rath yatra. After Advani announced his rath yatra, Modi undertook a three-day 'Sadbhavna fast', in an apparent attempt to change his 'Hindutva hardliner' image.

Modi also organised a massive rally here on September 25 against the Gujarat governor, hoping that Advani, who visits Somnath every year on the day (it marks the anniversary of the start of his Ram rath yatra of 1990), will also attend it, party sources said.

However, breaking a 20-year-old custom, Advani skipped the visit this time. As a result, no national-level leader was preset at the rally. 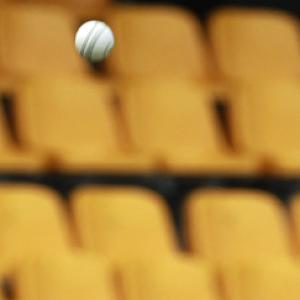