United States President Donald Trump has said he is looking forward to his first visit to India this month and signalled his willingness to sign a trade agreement with New Delhi 'if we can make the right deal'. 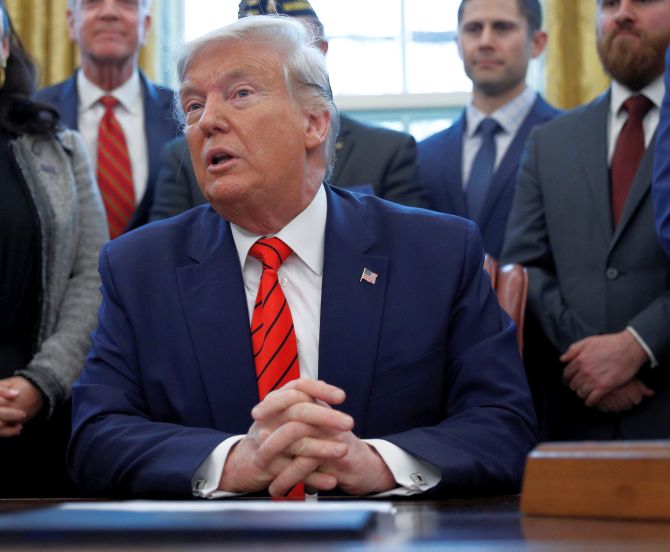 IMAGE: US President Donald Trump speaks to media at the Oval Office of the White House in Washington, DC. Photograph: om Brenner/Reuters

Trump will pay a state visit to India on February 24 and 25 at the invitation of Prime Minister Narendra Modi, who on Wednesday said the US President's visit will be a 'very special one' and it will go a long way in further cementing India-USA friendship.

"He (Modi) is a great gentleman and I look forward to going to India. So, we'll be going at the end of the month," Trump told reporters in his Oval Office on Tuesday, a day after the White House announced dates of his much-anticipated India trip.

Responding to a question, the president indicated that he is willing to sign a trade deal with India if it is the right one.

"They (Indians) want to do something and we'll see... if we can make the right deal, (we) will do it," said Trump, a fortnight ahead of his first visit to India as the 45th US president.

The two countries are negotiating a trade package to iron out differences and promote the two-way commerce.

In New Delhi, an official said India and the US were engaged in hectic parleys for a proposed trade deal between the countries ahead of the visit of President Trump.

However, the official said that as of now there is no clarity if the trade pact will be signed during Trump's visit.

Multiple rounds of talks have taken place between Commerce Minister Piyush Goyal and US Trade Representative Robert Lighthizer in the past few weeks over telephone.

India is demanding exemption from high duties imposed by the US on certain steel and aluminium products, resumption of export benefits to certain domestic products under their Generalised System of Preferences (GSP), greater market access for its products from sectors including agriculture, automobile, auto components and engineering.

On the other hand, the US wants greater market access for its farm and manufacturing products, dairy items and medical devices, and cut on import duties on some ICT products.

The US has also raised concerns over high trade deficit with India which was $16.9 billion in 2018-19.

Prime Minister Modi in his tweet, also noted that India and the US share a common commitment to democracy and pluralism.

'Our nations are cooperating extensively on a wide range of issues,' he tweeted.

A robust friendship between India and the US augurs well not only for the citizens of both countries but also for the entire world, the prime minister wrote.

'This visit (by President Trump) is a very special one and it will go a long way in further cementing India-USA friendship,' the prime minister said.

In Washington, India's new Ambassador to the US, Taranjit Singh Sandhu told PTI that Trump's forthcoming visit is a 'reflection of the strong personal rapport' between Trump and Modi.

"It also demonstrates their strong desire to take the relationship to new heights," said Sandhu, who presented his credentials to President Trump in the Oval Office of the White House last week.

Over the last three years, Trump and Modi have developed a personal rapport and in 2019, they met four times, including their historic joint address before a strong 50,000 crowd of Indian-Americans in Houston.

This year, the two leaders have spoken over the phone on two occasions, including the one over the last weekend.

"Just spoke with Prime Minister Modi," Trump told reporters on Tuesday in response to a question on his India visit.

Excited to travel to India later this month, said Trump referring to his conversation with Modi during which the prime minister apparently told him about the hundreds and thousands of Indians who would be there to welcome him in Ahmedabad, the capital of Gujarat.

Trump jokingly told reporters that now he will 'not feel good' about the size of the crowd that he addresses in the US which is usually between 40,000 to 50,000.

"He (Modi) said we will have millions and millions of people. My only problem is that last night we probably had 40 or 50,000 people... I'm not going to feel so good... There will be five to seven million people just from the airport to the new stadium (in Ahmedabad)," Trump said.

The two leaders are expected to jointly address a massive public rally at the newly-built Motera Stadium in Ahmedabad.

Being built at an estimated cost of USD 100 million, the Motera Stadium with a seating capacity of 1,10,000 spectators will be the world's largest cricket stadium overtaking the Melbourne Cricket Ground in Australia which can hold 1,00,024 people.