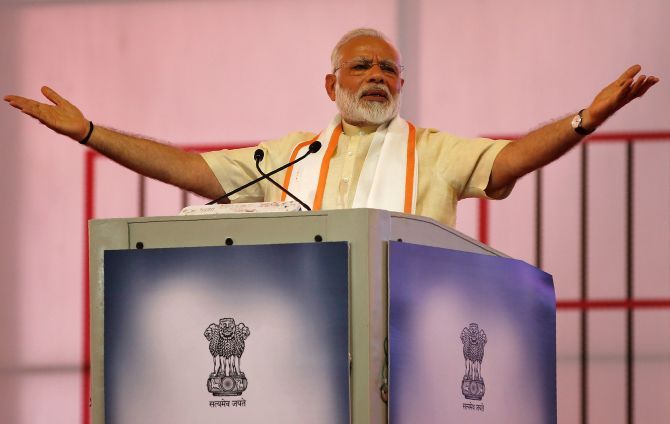 Prime Minister Narendra Modi on Sunday ruled out a single tax rate under the Goods and Services Tax, saying a Mercedes car and milk cannot be taxed at the same rate and accepting Congress party’s demand for a uniform 18 per cent rate would lead to a spike in food and essential items’ taxation.

Modi said the Goods and Services Tax has within one year of its launch led to over 70 per cent jump in indirect taxpayer base, demolished check-posts and merged 17 taxes and 23 cesses into one single tax.

The new tax regime, which subsumed central levies like excise duty and service tax and state taxes like VAT, is aimed at making indirect taxation “simple” while eliminating the Inspector Raj, he said, adding the GST is an evolving system which is calibrated based on feedback from state governments, trades and other stakeholders.

“It would have been very simple to have just one slab but it would have meant we could not have food items at zero per cent tax rate. Can we have milk and Mercedes at the same rate?

“So, when our friends in Congress say that they will have just one GST rate, they are effectively saying they will tax food items and commodities, which are currently at zero or 5 per cent, at 18 per cent,” he said in an interview to Swarajya magazine.

Modi, according to a part-transcript of the 45 minute interview posted by Swarajya on its website, said against a total of 66 lakh indirect taxpayers registered since independence, 48 lakh new enterprises have registered since the launch of the GST on July 1, 2017.

“Around 350 crore invoices were processed and 11 crore returns were filed. Would we be looking at such numbers, if GST were indeed very complex?” he asked.

“Check-posts across the country have been abolished and there are no more queues at state borders. Not only are truck drivers saving precious time but also the logistics sector is getting a boost and thereby increasing the productivity of our country. Would this be happening if GST was complex?”

To a query on criticism of GST implementation, he said the new tax regime was a massive change, requiring a complete reset of one of the world's largest economic systems.

“The reform merged 17 taxes, 23 cesses into one single tax. When it was finally introduced, it was our endeavour to make it simple and ensure sensitivity of the system. There are often teething troubles seen when a reform of this magnitude is carried out, but these issues were not only identified but also addressed in real time,” he said.

The GST, he said, has seen Indian cooperative federalism at its best. “We consolidated the states and developed proactively a consensus, where earlier governments had failed.”

The prime minister said earlier many taxes were hidden and under the GST, “what you see is what you pay”.

“The government has reduced taxes on nearly 400 groups of items. Around 150 groups of items have zero per cent tax rate. If you look at the rates, for most of the day-to-day commodities, the rate has actually come down. Be it rice, wheat, sugar, spices, etc, total tax levied has been reduced in most cases. Large number of items of daily usage are either exempted or in 5 per cent slab. Some 95 per cent items fall in/below the 18 per cent slab,” he said.

The GST, he said, has been designed to eliminate Inspector Raj with the help of information technology. From returns to refund, everything happens online, the PM said. 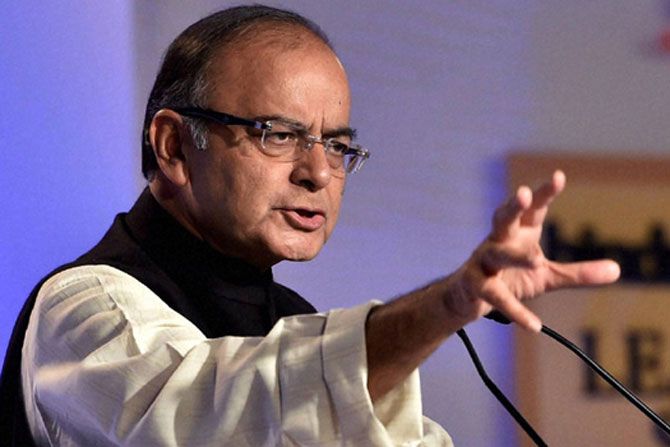 Union Minister Arun Jaitley dismissed the idea of a single GST slab being advocated by Congress president Rahul Gandhi as “flawed”, saying that it can only work in a country where the entire population has similar and high capacity to spend.

The minister, in an article on ‘The GST Experience’ on completion of the first year of rollout of the Goods and Services Tax, also exuded confidence the GST Council would look into rationalisation of the taxation structure after stabilisation of the collections.

“Rahul Gandhi has been advocating a single slab GST for India. It is a flawed idea. A single slab GST can function only in those countries where the entire population has a similar and a higher level of paying capacity.

“Being fascinated by the Singapore model is understandable but the population profile of a state like Singapore and India is very different. Singapore can charge 7 per cent GST on food and 7 per cent on luxury goods. Will that model work for India?” the minister questioned.

Since the GST is a regressive tax, the poor have to be given a substantial relief, he said, stressing that most of food items -- agricultural products and the Aam Aadmi used products have to be tax exempt while some others have to be taxed at a nominal rate.

“The others could be taxed higher. Eventually, as the collections improve, many more items from the 28 per cent category can possibly come down. Only sin products and luxury goods can remain there.

“There would also be a scope again, depending on the collection going up, to merge some of the mid category slabs but for that we have to see the progress of the new tax regime and the possible upward movement in the collections,” the minister said.

He further said that while Gandhi and former Finance Minister P Chidambaram have repeatedly demanded that petroleum products be forthwith brought within the GST, the finance ministers of the Congress-ruled states were against it.

“When I speak to the Congress finance ministers in the states, they don’t seem to be ready for it. But what was the United Progressive Alliance’s own track record on petroleum products in the GST? The Constitution amendment proposed by the UPA permanently kept all petroleum products outside the GST,” he said. 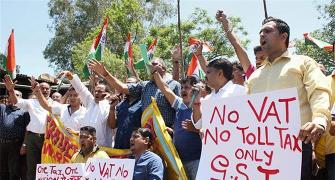