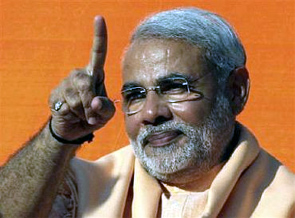 Former party president Nitin Gadkari was conspicuous by his absence during the meeting.

This is Modi's first visit to the state after being appointed the BJP's poll campaign committee chief.

Former party president Nitin Gadkari was conspicuous by his absence.

Modi discussed the prevailing political situation in the state, the party's organisational matters and alliance with the Shiv Sena.

Before the meeting, Javadekar told reporters that Modi is reviewing the party's poll preparedness in all the states. He will discuss the Lok Sabha polls and formulating alliances.

"The Sena-BJP alliance has always been strong in Maharashtra. Efforts will be to win the seats in Mumbai, Pune and Marathwada which the party lost in 2009," he said.

The core committee of the state BJP which met Modi comprises the state party unit president, vice presidents, general secretaries, treasurer, organisation secretaries, and all the Maharashtra unit leaders, including Munde and Gadkari, as invitees.

Meanwhile, Javadekar alleged that the trucks, flagged off by the All India Congress Committee from Delhi on June 24 with much fanfare for Uttarakhand relief, have been stranded at Rishikesh because the drivers have not been provided with money for purchasing petrol.

"This shows the Congress's true intention," he said.

Javadekar also assured that they will not politicise the Uttarakhand tragedy since the rescue operations are still going on.

Source: PTI© Copyright 2022 PTI. All rights reserved. Republication or redistribution of PTI content, including by framing or similar means, is expressly prohibited without the prior written consent.
Related News: Maharashtra BJP, Lok Sabha, Nitin Gadkari, Prakash Javadekar, Narendra Modi
Print this article
The Modi storm has left the Congress VERY nervous
How Narendra Modi rules by changing the laws
'Modi may help BJP win, but he is bad for the party'