News
Business
Movies
Sports
Cricket
Get Ahead
Money Tips
Shopping
Sign in  |  Create a Rediffmail account
Rediff.com  » News » They all had the same answer: 'Amazing'

In his 90-minute speech, Narendra Modi struck a chord with the Diaspora, promising them to fulfil their dream of a prosperous, corruption-free, clean and secure India.

By the time the event ended, Modi had reaffirmed his rockstar status among desis in the United States. 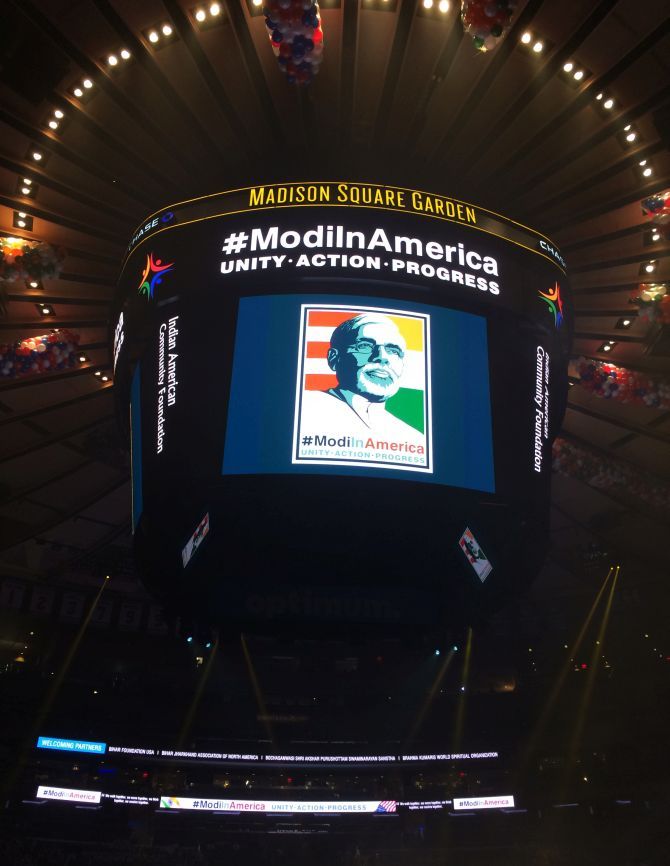 Were you there at the Madison Square Garden for Modi's reception? If you were not, you missed it!

The Indian-American community showed ferocious support for the prime minister. The enthusiasm was for him and about him. He came, spoke and conquered the hearts of Indian Americans present.

The speech was not business-oriented, but high on emotion.

It struck the chord with some 20,000 hearts who missed India on American soil.

Keval Shah of Chicago, Subhash Patel of Georgia, Shubhra Gupta of New Jersey, Jai Modi of New York, Rajeev Sharma of Houston -- they were all there to see him.

When I asked if they liked Modi's speech, they all had the same answer -- "Amazing!"

Without any doubt, they said: "Modi connected."

From Modi's point of view this was a 'Thank You' speech for his favourite Indian Americans, the NRI audience. Nothing more, nothing less.

As a local journalist put it, Modi was in his natural constituency.

Modi's most important gifts, ones that will be cherished for years to come, came in the form of a announcements related to visas for People of Indian Origin and Overseas Citizens of India.

Modi announced that in the coming months the government will merge the two categories.

Stating that immigration-related processes will improve soon, Modi said outsourcing of visa services will be expanded to expedite the processes.

What he actually meant, probably, was that the validation of the PIO card which is currently for 15 years will be now for a lifetime. But the process of getting a PIO card is so cumbersome that by the time a person gets a PIO card s/he is past the 50s.

To facilitate tourists from the US, he announced that Americans will get long term visas.

Also, he said the home ministry will discard the practice of reporting to police stations when non-Indians stay for beyond the permitted time period if they have visas. 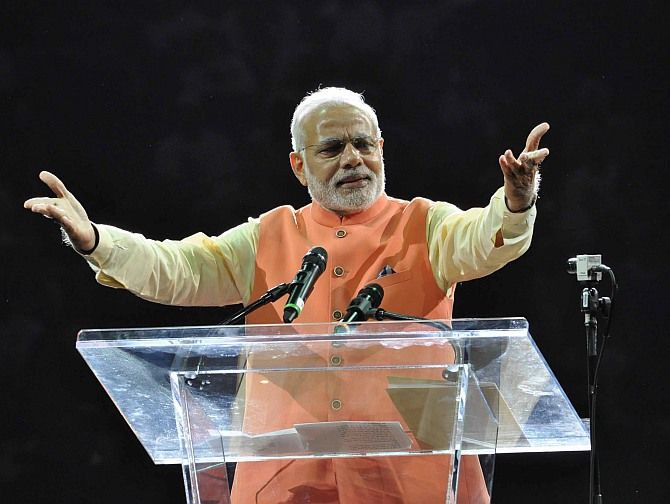 Modi caught the basic emotion of his supporters at Madison Square Garden right.

The reason why Modi enjoys rockstar status amongst Indian Americans is because most Indians after migrating to America, after making it big and after managing to survive against all odds, are unable to get India out of their system. This class wants India to prosper.;

Modi understands that every Indian American dreams of a prosperous, corruption-free, clean and secure India.

In him they see someone who will help them make India better.

Modi's effort to touch this dream-in-every-heart reached a crescendo when he tried to convince Indian Americans that their support to him will not go in vain.

4. From Hindutva to Maa Ganga

Modi gives a lot of thought to what he wears. At the Madison Square Garden, he wore a saffron jacket.

Seven times he said, "Bharat Mata ki Jai!, which is more pronounced than the usual "Jai Hind." That said it all.

It was clear that he thought that the audience largely understands the Bharatiya Janata Party kind of Hindutva.

He earned the maximum applause when he spoke about "Maa Ganga" and his ideas to clean the river.

He also touched a chord when he spoke about India's Mars mission.

Their presence suggested that the US no more finds Modi unacceptable, but as someone they would have to deal with for a long time.

The pragmatic US approach has come in full play to work with Modi.

The presence of so many political leaders revealed that the new Indian political force is recognised now.

During the never-before-kind of event, 20,000 people stood up in unison for the future of India. There was an expression of unity inside the arena.

Not all may have liked Modi, but they were in sync with his vision to clean India, build toilets, pursue goal of 'Make in India.'

There were enough people who spoke without being overzealous about Modi.

Srinivas, a researcher in New York who migrated from Hyderabad, wore a white Modi shirt distributed free at the venue.

"I do not know if he will deliver or not, he said, adding, "I like him now. We hope he will do some good for India."

On whether Modi would deliver, Ravi Saraswathi, a software engineer from Kerala living in Washington, said: "I do not know. I support him now."

Ravi had come with Modi's picture pasted on his back. He says BJP leaders from Kerala had been engaging over video conference to popularise Modi in America. He attended some of these meetings and liked what he heard from them about Modi.

Sunday was the golden day for the Indian-American community.

Mexicans, Jews, Filipinos, Chinese and many such Diasporas live here, but rarely has a leader from a native country received such a reception at the Madison Square Garden.

If the Indian-American community leaders do not take the event to its logical conclusion (harnessing the emotion and support for Modi into concrete action), it will be a colossal loss of community spirit. 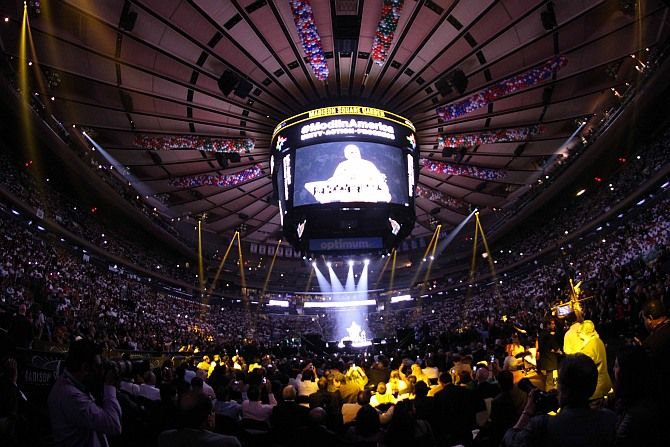 Modi's speech had many points which he has raised before like his penchant for cleanliness, his mission to build toilets and his idea of minimum government, maximum governance.

Three things, he said, make India different from other nations around the world: Democracy, Demographic Dividend and Demand of 1.2 billion people.

Noting that 65 percent of India's population was below 35 years, Modi said no other country had such a huge market or democratic structure of governance.

Modi's speech was addressed to the domestic audience as well.

Although it did not have any action plan for Modi's Indian-American bhakts, the BJP's American branch got a tremendous boost.

9. The 'see the positive' pitfall

What didn't work at the MSG was Modi's blooper when he mentioned Mahatma Gandhi's first name as Mohanlal instead of Mohandas.

On a larger scale one would like to question how long will Modi continue to play the 'hope card' for his supporters.

Modi has demonstrated enough of Gujarat, enough of positive signals and hopes.

His theme of 'see the positive only' should end at the MSG.

Also, the arrogance of Modi's supporters is strikingly visible at such events where they refuse to see any other side of what all Modi says. It happens in India, as well in America.

Journalist Rajdeep Sardesai, who was here to cover Modi's visit, got a hostile reception from Modi fans outside the arena.

Dr Bharat Barai, Modi's old friend and president of the Indian American Community Foundation, and his team deserve kudos for the trouble-free arrangement at the event.

There were lots of freebies.

Security at the Madison Square Garden was polite and swift.

Since it was a Sunday, a lot more people could come.

Gujaratis were seen in large numbers -- all of them in awe of Modi. 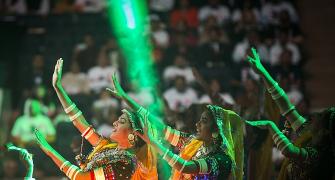 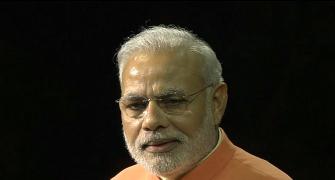 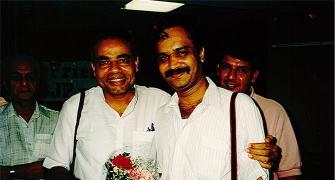 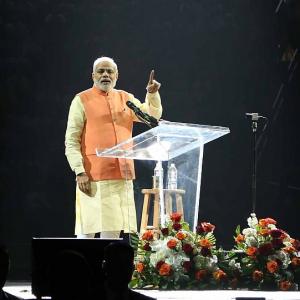 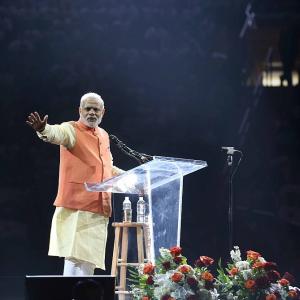