Prime Minister Narendra Modi on Saturday inaugurated a memorial in London dedicated to Dr B R Ambedkar over two months after India acquired the bungalow where the Dalit icon and architect of India's Constitution lived as a student in the 1920s. 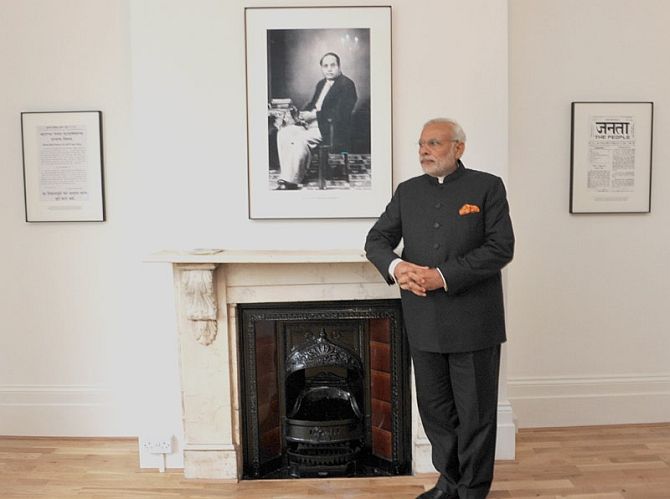 Modi visited the house where Ambedkar lived in 1921-22 during his student days at London School of Economics and said the Dalit icon's message of equality and justice continues to resonate.

Maharashtra had acquired the three-storey 2,050 sq ft house at 10 King Henry's Road, in northwest London, in August for an estimated cost of 3.2 million (over Rs 32 crore) to 4 million pounds (over Rs 40 crore) which the state government had borne.

Modi, who was accompanied by Maharashtra Chief Minister Devendra Fadnavis, paid floral tributes to Ambedkar's bust at the house.

Modi was greeted at the new memorial, to be referred to as Dr Babasaheb Ambedkar Museum, by Fadnavis and Rajkumar Badole, Maharashtra's minister of social justice and special assistance. "There are some very special documents and letters related to Babasaheb on display, including some of his writings. My personal highlight is a letter he wrote in German to Bonn University. It just shows the wide intellect of the great man," Fadnavis said.

"We hope this memorial will be an inspiration to young students and others from around the world," he said.

The six-room memorial is still under renovation but one of the floors which Modi explored today will be open to the public until November 20. It will then shut for further repairs and renovations and is expected to be open again in the new year.

The main floor that had been hurriedly spruced up for Prime Minister Modi's visit includes a selection of black and white photographs, Ambedkar's famous quotes and a room dedicated to bound copies of his writings as well as a large wall painting of the preamble of the Indian Constitution. "Plans for the memorial are still in discussion. We hope to also open it up for some Indian students who come to study at London School of Economics as an interim accommodation in due course. Meanwhile, the Indian High Commission in London will be taking care of it," Badole said.

"Ambedkar, whose 125th birth anniversary we are celebrating now, was not just an architect of India's Constitution but our parliamentary democracy," Modi had told MPs in his speech in the British Parliament earlier this week.

"He also stood for the upliftment of the weak, the oppressed and the excluded. And, he lifted us all to a higher cause in the service of humanity; to build a future of justice, equality, opportunity and dignity for all humans; and peace among people," he had said.

London-based Federation of Ambedkarites and Buddhist Organisation (FABO) UK, which had initiated the whole process by writing to the Indian government to purchase the property as a historically relevant monument, issued an open letter to the prime minister on Saturday urging action on "rising tensions in India".

Santosh Dass, FABO UK president, said in the letter, "I hope your visit to the Ambedkar Museum is your commitment to take a lead in translating his message and his legacy into real action in India and deliver real social change at home."

A group of FABO UK members and other Ambedkarites braved the rain to gather outside the quiet London street today and chanted slogans in favour of the Dalit leader.

After a 20-minute tour of the home, Modi set off to Solihull in the West Midlands region of England for his tour of the Tata Motors' owned Jaguar Land Rover (JLR) factory as his last UK engagement.

Ambedkar, who died in 1956 aged 65 was posthumously conferred with the Bharat Ratna, India's highest civilian award, in 1990.