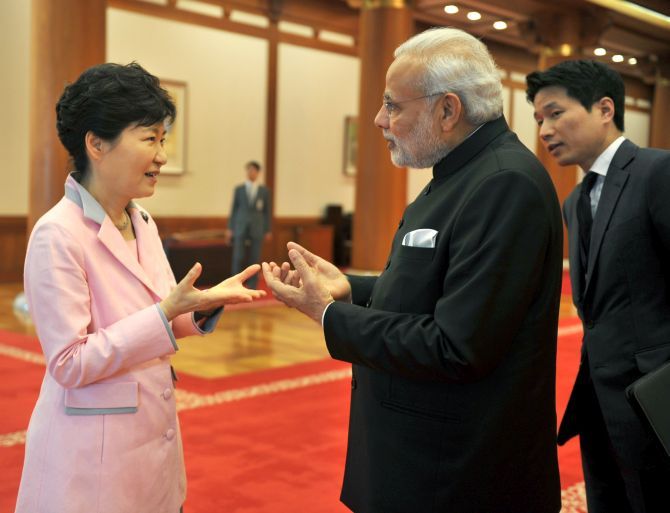 Prime Minister Narendra Modi on Monday took another jibe at previous governments which practiced 'Look East' policy, saying India has had enough of it and it's time to 'Act East'.

"Earlier, it was 'Look East Policy'. We have had enough of looking east. We now have 'Act East Policy' -- a key component of my government's foreign policy," Modi told Indian diaspora during a community reception at the Kyung Hee University in the South Korean capital.

'Look East' policy was first coined by the Narasimha Rao government in the 1990s and has been followed by the successive governments.

Modi also referred to economic experts saying that in the five-member BRICS grouping India was struggling but since last year (after his government came to power) things have changed.

"Since the last one year, the world is now saying that I (India) is an important segment of BRICS and the grouping can not be imagined without I (India)," said Modi, who arrived in Seoul from Mongolia on Monday on the last leg of his three-nation tour which also took him to China. Modi at the official welcoming ceremony in his honour, at the president's official residence Cheong Wa Dae in Seoul. Photograph: MEA Flickr

At a similar community reception in China's economic hub Shanghai last week, Modi broke his silence on opposition criticism over his frequent foreign visits and took veiled digs at his critics back home, saying he was being attacked for "tireless" work and asserted that if it was a "crime" he would continue to do it.

Modi, who came under attack over his criticism of previous governments during his last trip to Germany, France and Canada, said: "People are asking why is Modi travelling to so many countries...If you work less, criticism is normal. If you keep sleeping, criticism is normal. But it is my bad luck that I am being criticised for working more."

During his speech today, Modi pitched for his 'Make in India' initiative and said that he wants to make India a manufacturing hub using the world's best technology.

He invited Indians settled abroad to come and invest in the country, saying the mood and the perception about India has changed in the last one year.

"World's best technology should come to India," he said, adding that India has to attain new heights of achievements.

"Today, people are excited to come to India. This is the mood that has changed. And after all, the people make the Nation," he said.

Modi said the path is tough but he knows how to leave an indelible mark. "We have embraced that path. The solution to all problems is development," he said. 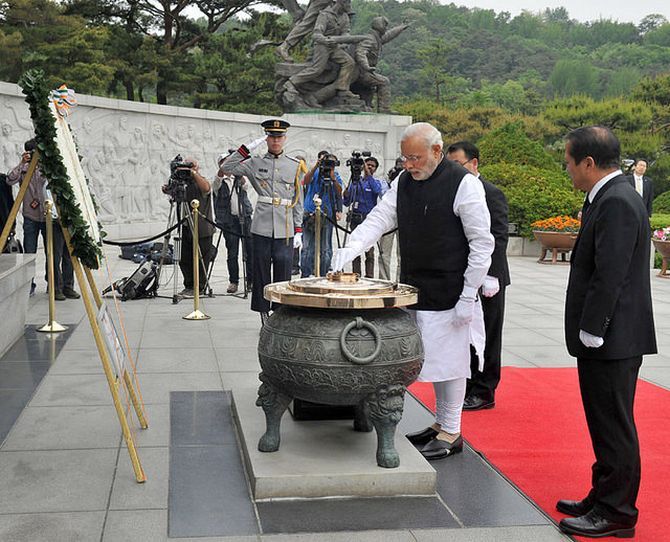 "There was a time when people left India saying country is of no good. These people are ready to come back. Mood has changed," the prime minister said, adding that India is being seen as the fastest growing economy of the world.

"Your experiences are indispensable for Indian progress," he told the Indian community, describing them as the real ambassadors of Indian history and culture in foreign lands.

Drawing on ancient linkages between the two countries, Modi invoked the legendary Korean King Suro, who is believed to have married an Indian princess from Ayodhya centuries ago.

Prime Minister Modi said human values and humanity should be the focal point of foreign policy and insisted that based on humanism his government has connected the SAARC countries.

Referring to recent crises in India's neighbourhood, Modi said five Indian fishermen were sentenced to death in Sri Lanka, but using the diplomatic missions his government was able to save them and bring home.

Stating that India stood firmly with Nepal after the devastating earthquake that hit the country last month, Modi said India rescued hundreds of people including those from 50 other countries.

He also made a reference to strife-torn Yemen from where India evacuated over 4,000 people including foreigners, saying it was because his government believes in humanity.

He said India sent drinking water by ships and planes and aided the Maldives when water crisis hit the island nation.

Later, he drove down to Cheong Wae Dae, the office and official residence of the South Korean President, where he was given a ceremonial welcome.

Earlier, Modi drove down to the Seoul National Cemetery straight from the airport after arriving in Seoul to pay his tributes to Korean veterans.

Officials said Samsung and LG were looking at expanding their operations in India and Hyundai Motors may announce two more plants in India in addition to the two that it has now.

To carry forward the momentum, Commerce Minister Nirmala Seetharaman is likely to visit South Korea next month, they said.

In the backdrop of complaints of delays, tax issues and problems of getting land faced by Korean companies in India, the two sides decided to establish a channel -- Korea Plus -- to facilitate their investment and operations in India.

The PM said he had sought President Park's support for participation of Korean companies in new areas.

Noting that bilateral trade was below its potential, the two leaders agreed to review the Comprehensive Economic Partnership Agreement and other market access related issues.

Bilateral trade is about US $16 billion and the two sides are keen to see that it goes up substantially. There are 300 Korean companies which have invested about US $3 billion in India. They employ about 40,000 workers in India.

Modi welcomed Korea's diplomatic efforts to maintain peace and stability of the Korean Peninsula. The PM said he also shared President Park's concerns that proliferation of nuclear and other weapons of mass destruction will not be in the interest of countries of the region. He offered India's support to Korean people for peaceful reunification of Korean Peninsula.

The joint statement said that the two leaders expressed concern over the development of North Korea's nuclear weapons and ballistic missile programmes, which was in violation of its international obligations and commitments.

They urged North Korea to fully comply with all of its international obligations, including under the relevant United Nations Security Council resolutions and other international pacts.

The two sides sought amendment to the bilateral Air Services Agreement to enhance flight connectivity covering more cities. Officials said Korea was keen on an increase in the direct flights from the existing six in a week.

The two sides also inked an MoU on cooperation in audio-visual co-production. It will enable co-production of films, animation and broadcasting programmes.

Another MoU was signed for cooperation between the power ministry and the Korean ministry of trade, industry and energy in areas of electric power development and new energy industries such as renewable energy, smart grids and power information and technology, transmission and distribution of electric power, energy deficiency and storage system.