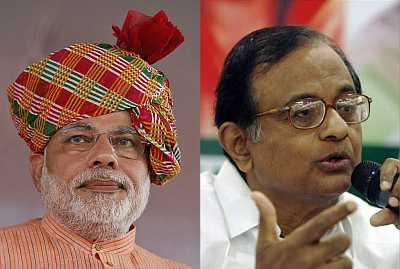 Launching a stinging attack on Union Finance Minister P Chidambaram for ridiculing his knowledge of economics, Bharatiya Janata Party’s prime ministerial candidate Narendra Modi on Saturday said the country was run with hard work and not Harvard, a reference to the Congress leader's education overseas.

In an apparent reference to Chidambaram's 2009 victory in Lok Sabha polls from Sivaganga after a recounting of votes, the Gujarat chief minister described him as the "recounting minister" and charged him with displaying 'excessive arrogance' while leaving the country's economy in bad shape.

"UPA government has a recounting minister. He lost (the election) but won in recounting. He is from Tamil Nadu. He thinks he was the first in the queue when God was distributing knowledge," Modi said without naming Chidambaram.

Addressing a well-attended public rally at suburban Vandalur in Chennai, he said when Chidambaram made fun of his knowledge about economics he had kept quiet "because more the mud is thrown, better the lotus blooms."

"He (the finance minister) said Modi's knowledge of economics can be written behind a postage stamp. The Congress-led UPA is headed by an eminent economist (Prime Minister Manmohan Singh). The finance minister also thinks himself to be equally efficient. He thinks nobody else is more intelligent than him.

"Only if you paste the postal stamp will the letter be delivered. I have proved myself through delivery (in Gujarat)," the BJP leader said.

He suggested there be a contest between him and Chidambaram and said "you are educated from a big university. I am from a poor background from a small village. The finance minister is from Harvard. I am from hard-work. Do we need Harvard or hardwork for the development of the country?" he said.

While the NDA-led government had in 2004 ensured an over 8 per cent growth rate, "as per your own statistics, Mr Recounting Minister, the GDP growth was 4.5 per cent in 2012-13," Modi said.

Modi said when he took over the reins in Gujarat in 2001, the GDP growth rate was minus 4.8 per cent.

"We worked hard with our so-called limited knowledge of economics. See what we have achieved. India grew at an average 7.6 per cent between 2001 and 2011-12 while the growth rate for Gujarat was 10.1 per cent," he said.

In fact, most states were better positioned in terms of debt and government liability than the Centre and so was the case with fiscal deficit, he said.

The central government's debt liability was Rs 50 lakh crore by March 2013, which was 50 per cent of the GDP, he claimed.

Hitting back at Congress president Sonia Gandhi for her "zeher ki kheti" remark, he said the UPA government was sowing the "seeds of communal poison" in army by ordering a head-count based on religion.

He also slammed Congress vice-president Rahul Gandhi for his "ulloo" jibe and said he had insulted the people of Gujarat by calling them 'fools'. 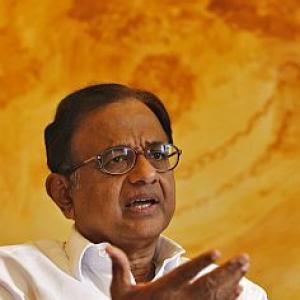