News
Business
Movies
Sports
Cricket
Get Ahead
Money Tips
Shopping
Sign in  |  Create a Rediffmail account
Rediff.com  » News » Mistrust between communities cause for violence in Assam

Mistrust between communities cause for violence in Assam

For reasons political as well as social, the Bodo tribe and the agrarian religious minority community have been living for decades in an atmosphere of mistrust under the jurisdiction of the Bodoland Territorial Autonomous district Council.

The spectre of violence that has ravaged lives and property of both the Bodo tribe and the religious minority community in Kokrajhar and Chirang, and parts of neighbouring Dhubri district is just a fall-out of the age-old uneasy co-existence between the two communities.

The relation between the two communities has been strained since the late 1980s when radical elements in the Bodo tribe (militants) started resisting people from the religious minority community to settle down in the forest areas in the Bodo heartland. At that time, the Bodo tribe was agitating for a separate Bodoland state and it was apprehensive of being marginalised by the increasing number of people from the religious minority community and suspected infiltrators from Bangladesh in their land.

The first notable ethnic flare-up involving the two communities occurred in 1993 during the violent phase of the Bodo statehood and separatist movement in Assam. The conflict left 50 dead in parts of Kokrajhar and Bongaigaon districts of Assam.

In 1996, suspected Bodo tribe militants instigated a massive ethnic cleansing targeting Adivasi and other non-Bodo settlers in the forest and Bodo dominated areas.

The religious minority community's aspiration to have right over the land and political ambition in the Bodo heartland areas suffered a set-back in 2003 when the Central government signed the Bodo Peace Accord with militant Bodo Liberation Tiger (now disbanded) paving the way for formation of the BTC under the amended sixth schedule of the Constitution that granted autonomy to the Bodo tribe in Assam.

Though Bodos are the single largest ethnic group in the BTC area, a major chunk of the population in the area are non-Bodos, with the religious minority community being the largest non-Bodo community.

As the Bodo peace accord and the formation of the BTC ensured that political rights in the area rested with the Bodo tribe, it did not augur well for the aspirations of the larger section of people in the area comprising of the religious minority community and other non-Bodo groups.

Resentment kept growing among non-Bodos from the area as Bodos now enjoy exclusive rights over government jobs and mostly benefitted from all government welfare schemes in BTC areas. The uneasy calm between Bodos and the minorities sparked another devastating spell of violence in 2010, especially in areas under Darrang district of Assam.

The AAMSU and the ABMSU have been striving to protect the rights of the community in the BTC areas now ruled by Bodoland People's Front (BPF), a political party formed by former militant leaders of the disbanded BLT.

The BTC has 40 members out of which six are nominated by the government from ethnic communities other than Bodo. Out of the rest 34 seats, 29 are reserved for the Bodo tribe community while five are open for contest by all. 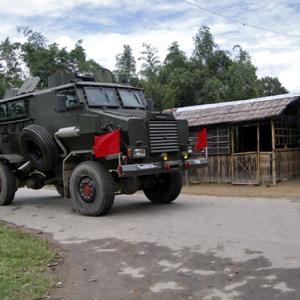