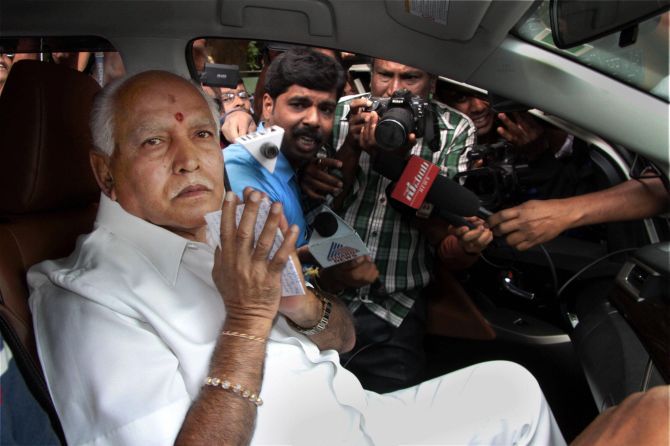 A special Central Bureau of Investigation court on Tuesday acquitted former Karnataka Chief Minister B S Yeddyurappa, his two sons, son-in-law and nine others in a corruption case, giving a boost to the political fortunes of the Bharatiya Janata Party leader ahead of 2018 assembly polls.

The corruption case related to illegal mining in Bellary that allegedly involved a bribery amount of Rs 40 crore.

Pronouncing the judgement in a jampacked court hall, Judge R B Dharmagouder exonerated all the 13 accused in the case, stating the prosecution had failed to establish their guilt under the Prevention of Corruption Act and the Indian Penal Code.

The verdict has given an impetus to Yeddyurappa, who was appointed the state BJP chief in April this year ahead of the assembly elections due in 2018.

Apart from 73-year old Yeddyurappa, who was the prime accused, his sons B Y Raghavendra, an MLA, and B Y Vijayendra, as also son-in-law R N Sohan Kumar and former minister S N Krishnaiah Setty and nine others were cleared of the charges.

Yeddyurappa, who had led BJP to its first ever government in the south in the 2008 assembly polls, was forced to resign as chief minister in August 2011 following indictment by then Lok Ayukta Santosh Hegde in the Bellary illegal mining case.

The CBI had filed a chargesheet in 2012 against Yeddyurappa, his sons and son-in-law, Prerana Trust, managed by Raghavendra, M/s South West Mining Company and Bellary-based M/s JSW Steel for alleged abuse of official position and corruption.

The charges were framed invoking Section 120B (criminal conspiracy) and 420 (cheating) of the India Penal Code, as also various sections of the Prevention of Corruption Act.

The chargesheet had alleged involvement of Rs 40 crore kickbacks, including Rs 20 crore that was allegedly paid to Prerana for granting favours, including mining licenses, during Yeddyurappa’s chief ministership from 2008 to 2011.

A smile writ large on the face of Yeddyurappa, who was present in the court when the verdict was pronounced with his overjoyed sons exchanging pleasantaries with Sohan Kumar while emerging out of the court hall.

Outside the court premises, supporters of Yeddyurappa broke into celebrations, hailing the judgement as they raised slogans in his praise and burst crackers.

Soon after the verdict, Yeddyurappa in a tweet expressed his happiness, saying ‘Satyameva Jayate. Justice is done. I stand vindicated.’

Later speaking to reporters, a hugely relieved Yeddyurappa said, “I am happy that false allegations and politically motivated charges have been dismissed.”

He said the court verdict had also come as a relief to BJP workers and given him a ‘new fillip’ to bring back the party to power in the 2018 state polls.

“This pronouncement has come as a relief to lakhs of BJP workers and provided a new vigour to me. I have a task on my hand to bring back the party to power in the next assembly elections. To this end, I will be touring all the constituencies to gather support for the party,” he said.

The accused had been charged with criminal conspiracy, cheating, forgery and corruption, according to the CBI chargesheet.

The case had also seen Yeddyurappa spending about three weeks in jail in October 2011 before being granted bail.

The genesis of the case goes back to a report submitted in July, 2011 by the then Lokayukta Santosh Hegde who had indicted Yeddyurappa in his findings on alleged illegal mining.

This had caused political turbulence in the state, costing the Lingayat strongman the chief ministership.

Yeddyurappa has been cleared of charges in most of the graft-related cases but is still battling some more.