News
Business
Movies
Sports
Cricket
Get Ahead
Money Tips
Shopping
Sign in  |  Create a Rediffmail account
Rediff.com  » News » Migrant workers are not welcome in their villages

Many of the thousands of jobless workers, marching from their workplaces to their native villages in states like Bihar and Uttar Pradesh hundreds of kilometres away amid the coronavirus lockdown, are not being welcomed back home. 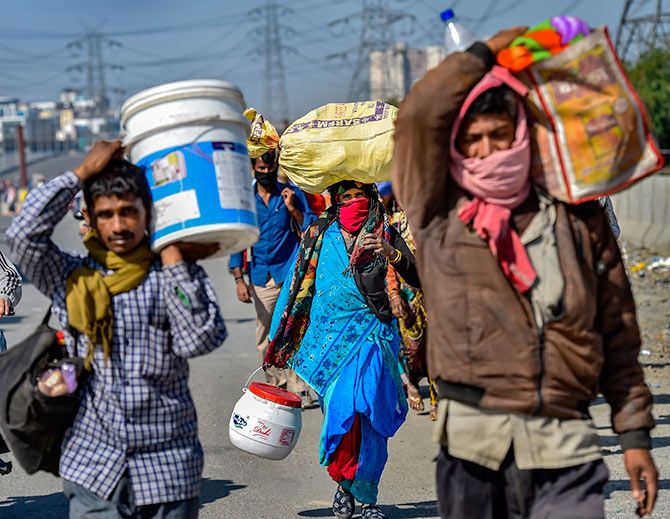 IMAGE: A group of migrants carry their belongings as they walk to their villages, amid a nationwide lockdown in the wake of coronavirus pandemic, near Delhi-UP Border in New Delhi. Photograph: Ravi Choudhary/PTI Photo

In many places in Bihar and elsewhere, those returning back home from states and even from neighbouring countries like Nepal and Bhutan were reported to the police, who, in turn, handed them over to medical authorities for tests and subsequent measures.

Some villages in Bihar have gone into lockdown, refusing entry of people even from neighbouring areas, to curb the spread of infection.

"Four of my co-villagers working in Nepal returned home two days ago. But villagers informed police about them following which they swooped on the village with ambulances and handed them over to the medical team," Abhishek Singh said of Alawalpur village on the outskirts of Bihar's capital Patna.

"In neighbouring Fatehpur village, six people returned home from Bhutan yesterday, undertaking part of their journey on foot in Bihar and West Bengal, but were handed over to police by neighbours," said Singh.

In a similar case, nine people returning to their village Jamalpur, near Alawalpur, from Mumbai were handed over to police and medical authorities, said Luv Singh of Jamalpur village, though they had been examined earlier in Mumbai by medical authorities.

They too were asked to stay at home, he added.

"Yes, it's true. Initially over 15 people coming from outside the state were reported to us by villagers and we handed them over to medical teams," said Inspector Kumar.

Later the medical teams have begun picking them up on their own after getting information about such cases, he said, adding at least 40 people, belonging to various villages like Alwalpur, Fatehpur, Kamarjee, Kandap and Masadhi in the jurisdiction of Gaurichack police station were reported to the police.

In fact, Piariya village near Alawalpur has locked itself down, refusing entry to even people from neighbouring areas, he said.

In other instances, some youths, who had recently jumped quarantine in Karnataka and reached their village in West Champaran in north Bihar, were handed over to the police.

The imposition of 21-day nationwide lockdown to break the coronavirus transmission chain has triggered large-scale migration of jobless daily wagers, undertaking marches from cities outside their states to their native places, braving days of hunger and fatigue and breaking down on slightest gesture of sympathy.

But the villagers' stance of reporting them back to the police is not in variance with the stands of various governments, which have been urging workers to stay put at places where they are, assuring them of food and other essentials.

Many have also panicked over rumours that the lockdown would be extended further.

A group of four construction labourers, marching from Gurgaon in Haryana to Badaun in Uttar Pradesh, met this reporter on National Highway 9 in Delhi leading to Ghaziabad on Saturday night.

They said they are returning back home on foot itself because "experts say the lockdown period would be further extended by at least three months", referring to some WhatsApp forward messages they received.

Rana Ajit
Source: PTI© Copyright 2021 PTI. All rights reserved. Republication or redistribution of PTI content, including by framing or similar means, is expressly prohibited without the prior written consent.
SHARE THIS STORY
Print this article
The plight of migrant workers across this land 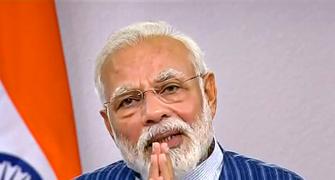 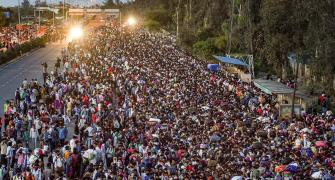 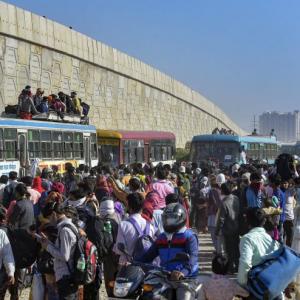