News
Business
Movies
Sports
Cricket
Get Ahead
Money Tips
Shopping
Sign in  |  Create a Rediffmail account
Rediff.com  » News » Maya show over, but she's the ONLY UP CM to complete term!

Maya show over, but she's the ONLY UP CM to complete term!

Bahujan Samaj Party supremo Mayawati may be on her way out of 'pancham tal' -- the Chief Minister's Office in the secretariat building -- but she has the distinction of being the first chief minister of Uttar Pradesh to have completed a full five-year term in the post.

The Dalit czarina, whose social engineering catapulted her to simple majority of 206 in the 403-member state assembly in the 2007 elections, became the first chief minister of the state to do so since independence.

For Rediff Realtime News of UP election results, click here

The leader, who her rivals accuse of having megalomaniac tendencies, became the chief minister for fourth time in 2007 achieving the feat of former chief ministers Chandrabhanu Gupta and N D Tiwari of Congress who had graced the post four times each.

The history of the state shows that none of the 31 chief ministers were able to complete a five-year term, not even stalwarts like Gobind Ballabh Pant, Sucheta Kriplani, V P Singh, Kamlapati Tripathi, Kalyan Singh and Mulayam Singh Yadav among others.

Pant took oath as the first chief minister of the state on May 20, 1952 but two years later he was succeeded by Sampurnand. In the next assembly elections in 1957, it was Sampurnanda who led the Congress to victory but after his demise in 1960 Chandra Bhanu Gupta became the Chief Minister.

After electoral victory in 1962, Gupta became the chief minister for the second time but had to resign within a year paving way for Sucheta Kriplani to become the first woman chief minister in independent India in 1963.

Kriplani was elected to Lok Sabha in 1967 and Gupta again became the chief minister for a brief period of one month after which Choudhary Charan Singh, with the help and support of Raj Narain and Ram Manohar Lohia, became chief minister of Uttar Pradesh in 1967, and later in 1970.

But the Jat leader's tenure on both occasions was less than a year before being dismissed by a Congress government at the Centre and imposition of the President's rule in the state.

From the first time it was imposed during the tenure of Charan Singh in 1968, till 2007, President's rule was imposed in the state nine times.

Mulayam Singh Yadav took oath of the chief minister in 1989 for the first time but remained in the post only two years. While the Mandal-Mandir protests were at peak in the country, Kalyan Singh rode on the saffron wave to be elected as the chief minister of the state on June 24, 1991. His term ended as he tendered resignation and the President's rule was imposed on December 6, 1992 after the Babri Masjid demolition.

Mulayam Singh again came to power with support from Bahujan Samaj Party in 1993 but lasted for nearly one-and a half year as Mayawati pulled out her party's support. Mayawati became the chief minister for the first time in 1995 with the BJP support but could not complete her term.

After a brief President's rule, Mayawati again became the chief minister in 1997 as part of a six-month-each-agreement between the Bharatiya Janata Party and the Bahujan Samaj Party.

As per the agreement, Kalyan Singh succeeded her after six months. He could not complete his term and Ramprakash Gupta took his place in 1999 and later Rajnath Singh became the chief minister in 2000.

Mayawati became the chief minister for third time after the 2002 election with support from the BJP. Within a year the government fell and Mulayam Singh Yadav became the CM for the third time in 2003 and continued till 2007. 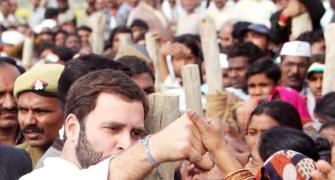 Exclusive: Congress alleges business hand in Rahul debacle
'BJP gain in UP thanks to Cong position on minorities'
Verdict: Why Cong should not protect its first family 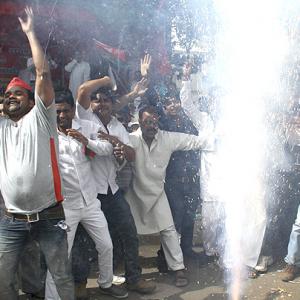 MUST READ: Ten trends of UP elections 2012 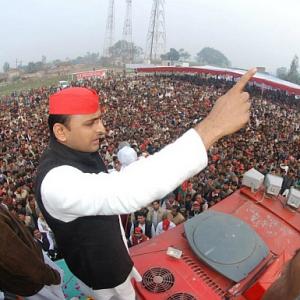 What you must know about the election 'hawa'