Massive relief and rescue operations have been launched in Manipur where a strong 6.8 magnitude earthquake on Monday claimed nine lives, shattered buildings and caused panic even as the National Crisis Management Committee met to review the situation. 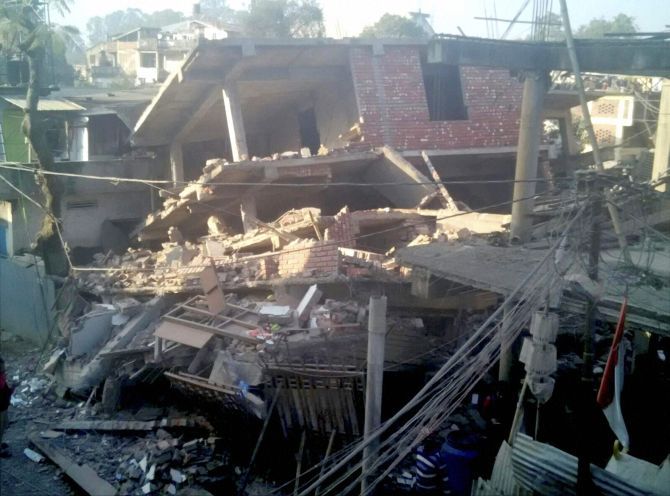 Debris of building a day after it collapsed in a massive earthquake in Imphal on Tuesday. Photograph: PTI

Teams of rescuers from National Disaster Response Force, rushed from Guwahati, were engaged in clearing the debris and looking for survivors trapped under heaps of rubble.

NDRF teams have been deployed in the worst-hit Tamenglong district, epicentre of the quake, while another is on standby in Silchar in Assam.

Most offices in state capital -- private and government departments dealing with non-essential services -- were closed besides educational institutions.

Several buildings in Manipur secretariat and the landmark Ima market in Imphal had developed cracks, while some school structures collapsed.

Power supply has been restored in the affected areas except in some parts of Senapati and Tamenglong districts. A three-member team from Power Grid Corporation is in Manipur to assist in restoring power supply.

A Central medical team comprising orthopedics, surgeons, anesthesiologist and other technicians has also been deputed to Manipur to assist with the treatment of injured people.

According to reports received from Manipur government, 8 people lost their lives and 88 were injured due to earthquake, an official statement said in Delhi. Of the injured 33 were in serious condition and admitted to different hospitals in Manipur, including the state-run RIIMS and JNIMS, while the rest were discharged after first aid.

To assess the safety of partially damaged public buildings and advise the state government on issues related to repair and retrofitting of these structures, the National Disaster Management Authority is deploying a team of experts.

The statement said, telecom services are fully operational and a senior official from BSNL has reached Imphal to take stock of partial damage to the state-run operator's building and to advice on steps that need to be taken to ensure safety and continuity of the telecom services.

The ministry of home affairs is coordinating with the NDMA, state government and related central government departments and agencies for providing all necessary help, it said.

Vehicular movement was normal in the state capital.

The National Crisis Management Committee met in Delhi and took stock of the situation. Cabinet Secretary P K Sinha chaired the review meeting while Manipur Chief Secretary participated in it through video conference.