Marshal of IAF Arjan Singh passes away at 98

His demise marks an end of a glorious era of the Indian Air Force. 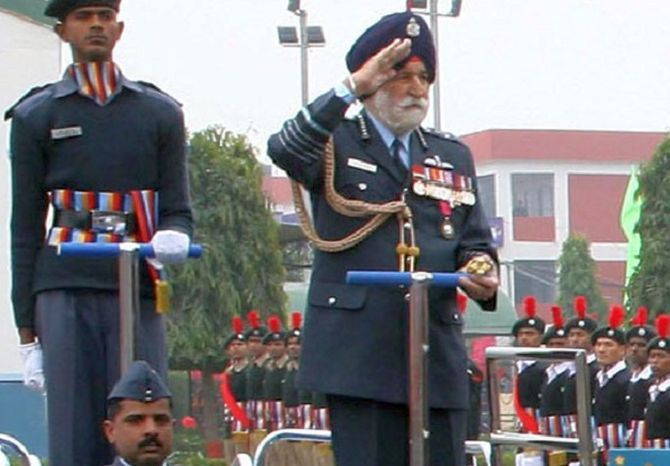 War hero Marshal Arjan Singh, who led the Indian Air Force during the 1965 India-Pakistan conflict, died on Saturday after he was today and his condition was critical.

Ninety-eight-year-old Singh, the only officer of the IAF to be promoted to five-star rank, equal to a Field Marshal in the army, was admitted to the Army’s Research and Referral hospital on Saturday morning after he suffered a cardiac arrest, the defence ministry said.

An icon in the country’s military history, Singh had led a fledgling IAF in the 1965 Indo-Pakistan war when he was just a 44-year-old.

As Pakistan launched its Operation Grand Slam with an armoured thrust targeted at the vital town of Akhnoor in Jammu and Kashmir, he led the IAF through the war with courage, determination and professional skill.

The fighter pilot, who inspired the IAF despite constraints on the full-scale use of air combat power, was awarded the Padma Vibhushan, the second highest civilian honour, in 1965.

Born on April 15, 1919 in Lyallpur in Punjab in undivided India, his father, grandfather and great grandfather had served in the cavalry.

Educated at Montgomery, British India (now in Pakistan), he had joined the RAF College, Cranwell in 1938 and was commissioned as a Pilot Officer in December the following year.

Singh had led an IAF squadron into combat during the 1944 Arakan Campaign and was awarded the Distinguished Flying Cross that year.

Field Marshals Sam Manekshaw and K M Cariappa of the army were the two other officers with a five-star rank.

After his retirement from the air force, Singh was appointed as the India’s Ambassador to Switzerland in 1971 and concurrently served as the ambassador to the Vatican.

He was also the high commissioner to Kenya in 1974.

Singh served as a member of the National Commission for Minorities and was also the Lieutenant Governor of Delhi. He was made Marshal of the Air Force in January 2002.

The fighter aircraft base at Panagarh in West Bengal was named in his honour on his birthday last year. 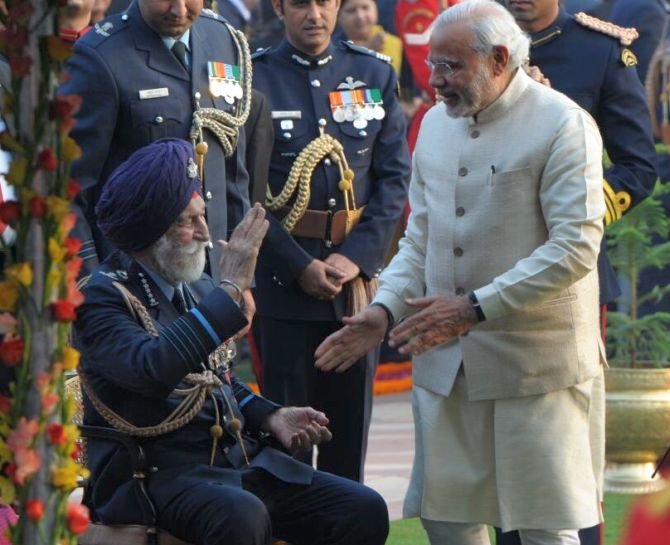 "India mourns the unfortunate demise of Marshal of the Indian Air Force Arjan Singh. We remember his outstanding service to the nation," he tweeted.

Modi said the determined focus of Singh, who was promoted to the five-star rank of Marshal of the Air Force in 2002, on capacity building in the IAF added great strength to India's defence capabilities.

"India will never forget the excellent leadership of Arjan Singh in 1965, when the IAF saw substantial action," the prime minister said in a series of tweets.

Modi recalled how the ageing war hero stood up to salute him despite his ill health.

"Sometime back I met him, who despite his ill health tried to get up to salute even though I said no. Such was his soldier discipline," he said.

He said his thoughts were with Singh's family and those mourning the demise of the distinguished air warrior and a fine human being," the prime minister added.

President Ram Nath Kovind too condoled the demise of war hero Marshal Arjan Singh saying he won the nation's gratitude for his military leadership in the 1965 Indo-Pak war.

"Sad at demise of a great air warrior & Marshal of the Air Force Arjan Singh. Condolences to his family & IAF community.

"Marshal of the IAF Arjan Singh was a WW II hero & won our nation's gratitude for his military leadership in 1965 war," Kovind said in a series of tweets.

Defence Minister Nirmala Sitharaman also paid her condolences after the demise of Marshal of the Indian Air Force. She said, "Great loss. He led an exemplary life. He fought many wars. The conduct and exemplary nature in which Marshal of IAF Arjan Singh conducted himself will be remembered for generations."

Source: PTI© Copyright 2021 PTI. All rights reserved. Republication or redistribution of PTI content, including by framing or similar means, is expressly prohibited without the prior written consent.
Related News: Indian Air Force, Marshal Arjan Singh, Marshal of the Air Force, RAF College, British India
SHARE THIS STORY
Print this article
It is an honour for me and IAF: Arjan Singh