Marine who peed on Taliban corpses to be court martialled 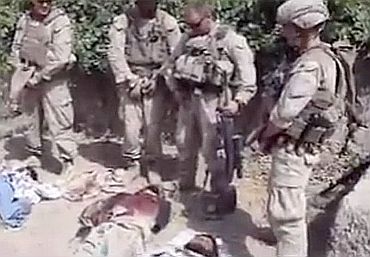 United States Defence Department authorities has announced a special court martial for a marine, who was involved in an alleged desecration incident in Afghanistan, wherein he was seen urinating on corpse of Taliban fighters.

"Staff Sgt Joseph W Chamblin would be tried by special court-martial at Marine Corps Base Camp Lejeune in North Carolina on December 19," an official statement said on Friday.

The incident took place during a counter-insurgency operation in the vicinity of Sandala, Musa Qala District in Helmand Province of Afghanistan, on July 27, 2011. The video of this incident surfaced on you tube early this year.

In September this year, Chamblin along with Staff Sergeant Edward Deptola were charged with misconduct that took place during the operation.

Deptola is also charged with failing to stop the unnecessary damaging of Afghan compounds and wrongfully and indiscriminately firing a recovered enemy machine gun.

In August, three Marines were punished for misconduct that came to light during several investigations into the desecration and filming of deceased Taliban, shown in a video that became public in January 2012.