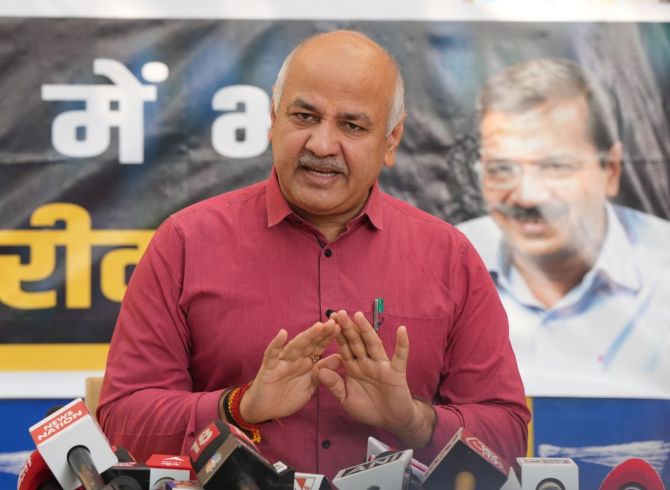 The Aam Aadmi Party is not scared of such petty politics, he, however, said.

According to sources, Delhi Lieutenant Governor V K Saxena has directed the city police commissioner to take cognisance of the allegations.

"LG has taken note of tweets and statements by AAP leaders, including Dy CM Manish Sisodia and asked the Police Commissioner to ensure that such eventuality -- orchestrated, or otherwise, does not happen, to the farthest possible extent," the sources said.

AAP in a statement said that if anything happens to Kejriwal or any other party leader, BJP should be held responsible.

'Due to the fear of defeats in the Gujarat and MCD polls, the BJP is hatching a conspiracy to kill @ArvindKejriwal,' Sisodia said in a tweet in Hindi.

'Their MP Manoj Tiwari is openly asking his hooligans to attack Kejriwal and he has done complete planning. The AAP is not scared of their petty politics and people will give a reply to their hooliganism,' he wrote.

His remarks came in response to Tiwari's tweets earlier in the day, in which he had expressed concern over Kejriwal's security, while highlighting recent allegations of corruption and 'selling of tickets' for the MCD polls.

'I am concerned about the security of Arvind Kejriwal because people and AAP volunteers are angry over sustained corruption, selling of tickets (for the MCD polls), friendship with rapist and massage in jail incidents. Their MLAs too have been thrashed. It should not happen with the chief minister of Delhi ...,' the North East Delhi MP said in a tweet in Hindi.

In its statement, AAP condemned the alleged threats and said that the BJP is 'horrified' by the huge public support AAP is receiving in Gujarat and Delhi.

'Threatening to kill Arvind Kejriwal, the chief minister elected with a huge mandate, the man who is the national convenor of the party running governments in two states, is an insult to the people of Delhi and the country.

'It is clear from BJP's threat to CM Arvind Kejriwal that it has no faith in democracy, and that BJP can go to any extent for power,' the statement read.

It said that the BJP does not have a single achievement to show in its 15-year reign in MCD and 27-year-long government in Gujarat.

And for this very reason, the BJP was resorting to 'completely abusive hateful language', the party said.

'No matter how many diversionary and divisive tactics the BJP uses, they will not be successful in taking forward this crooked agenda for long. The public will give them a befitting reply and shut their mouths very soon.

'The historic results that await the MCD and Gujarat will be the public's answer for the humiliation they had to face at the hands of the BJP. The public will take revenge for this disrespect through the EVM,' the party said.

The party mentioned a past attack against Kejriwal, and accused the BJP for it.

'BJP got the CM attacked in the same way earlier as well. It is the love of the public that Kejriwal and his family are safe and sound. Aam Aadmi Party strongly condemns such rotten mentality,' it added.

AAP also alleged that there have already been attempts to attack Kejriwal by the BJP workers.

'In the month of March, BJP workers had attacked the CM residence. All this happened in the presence of the police and the police kept watching. BJP workers also vandalised the place while shouting slogans.

'BJP workers uprooted CCTV cameras and tried to enter inside by breaking the security barrier. Police later caught some of the accused and sent them to jail and when they came out on bail, they were welcomed by BJP leaders,' read its statement.

'On the other hand, BJP has given a ticket to Pradeep Tiwari, one of the accused who attacked the CM's house, from Ramesh Park Ward No. 91 of Moti Nagar Assembly,' it went on to allege.

The Delhi BJP accused AAP of debasing the political discourse with such allegations.

'@msisodia how low will you go. Your people are calling you thieves. A case of suspected suicide has also come to the fore. Your MLAs are openly threatening the general public. And now this tweet. It seems your internal survey is telling you that AAP is losing not only in Gujarat and Himachal but also in Delhi,' Delhi BJP spokesperson Praveen Shankar Kapoor said in a tweet in Hindi. 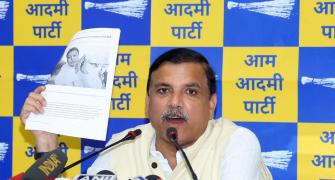