Days after the violent protests in Mangaluru against the Citizenship Amendment Act resulted in the deaths of two people, police released video clippings purportedly showing protesters bringing stones in an auto-trolley, hurling it at the personnel and trying to destroy the CCTV cameras. 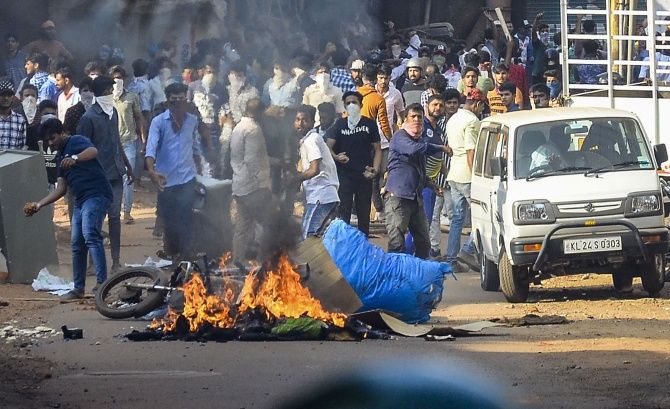 The video also shows protesters covering their face with clothes to conceal their identity and attempting to destroy CCTV cameras in a bid to wipe out evidences.

The video footages were released on Monday night after the Congress and the Janata Dal-Secular claimed that the people who died during the firing were 'innocent' and nowhere connected to the violence.

Former chief ministers Siddaramaiah and H D Kumaraswamy had met the family members of the deceased and both of them gave away cheques of Rs 5 lakh to each of the two family members.

This was besides Rs 10 lakh ex gratia given by the state government to the families, which lost their members in the police firing on last Thursday.

Home Minister Basavaraj Bommai hailed the police for exercising maximum restraint even in the face of extreme violence and slammed opposition leaders for calling the 'notorious people' innocent.

"There are videos taken by media persons and captured in the CCTV cameras, which show how large scale stone-pelting had taken place (in Mangaluru). In a systematic manner, people had covered their face, destroyed the CCTV cameras and carried out arson and looting in an organised way. They also indulged in stone pelting and used petrol bomb," Bommai told reporters.

Reacting to Siddaramaiah's statement that innocent people were killed, Bommai said, "Siddaramaiah has called the stone-pelters and those involved in arson innocent and wants to support them. By calling them innocent, Siddaramaiah has given clean chit to the notorious people but we have not,” he said.

The BJP state chief Nalin Kumar Kateel said the footage released by police were a "stark reminder of violent protests in Kashmir as youth in large number hit the street and started throwing stones at the police".

"It was only when the things went out of hand police opened fire," Kateel told reporters after inaugurating a day-long workshop on the CAA at the Karnataka BJP headquarters.

Noting that the truth has now come out, he said the entire violence was pre-meditated and blamed Congress for instigating violence.

Kateel also suspected that agitators from outside Karnataka took part in the violence and arson.

“Congress has to answer who were behind the violence and who threw stones at police. Can they be innocent?" Kateel asked.

Addressing reporters in the Congress office, Rao said, "The protesters had no choice but to cover their faces as police lobbed tear gas."

Two persons were killed in a police firing in Mangaluru last Thursday as the protest against the CAA had turned violent, following which the city was brought under curfew and mobile internet service was suspended. 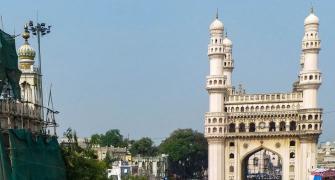 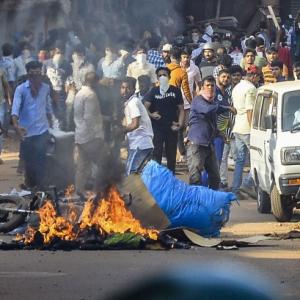