The body of a 35-year-old man was found near railway tracks in Rajasthan’s Alwar district on Saturday, with activists alleging that he was killed by cow vigilantes.

The body of Umar Khan, hailing from Ghatmika village in Bharatpur district, was recovered near Ramgarh on Saturday and has been sent for post-mortem, Deputy Superintendent of Police (Ramgarh Circle) Anil Beniwal said.

“The matter is under investigation. We are awaiting the post-mortem report,” Govindgarh’s Station House Officer Daulat Ram said.

The post-mortem will be conducted in Jaipur.

According to the deputy superintendent of police, preliminary inquiry has revealed that Khan was involved in cow smuggling.

Police said Khan, along with two others, was transporting cattle in a vehicle on November 10.

Social worker Maulana Haneef claimed that Khan, along with two others, was ferrying cattle in a vehicle when unidentified men opened fire at them. Khan died on the spot.

“We staged a protest outside the mortuary at a hospital in Alwar where the body was kept and have demanded early arrest of the accused,” he said.

Haneef said that the incident came months after the killing of Pehlu Khan, a dairy farmer from Nuh district of Haryana.

In April this year, 55-year-old Pehlu Khan was lynched by suspected cow vigilantes in Alwar while he was transporting cattle, triggering a nationwide outrage.

The Mewat region is known for rearing cows and now “self-proclaimed cow sympathisers” of various right wing outfits are targeting those who rear cows, the social activist said.

The head of Meo community panchayat, Sher Mohammad, said that even if Umar Khan was involved in cow smuggling, there are laws to deal with smugglers. “Who has given the cow vigilantes the right to take the law into own hands. Police should act against cow vigilantes,” he said. 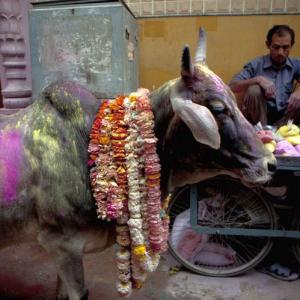 With 26 cases already of cow vigilantism, 2017 set to be worst year yet