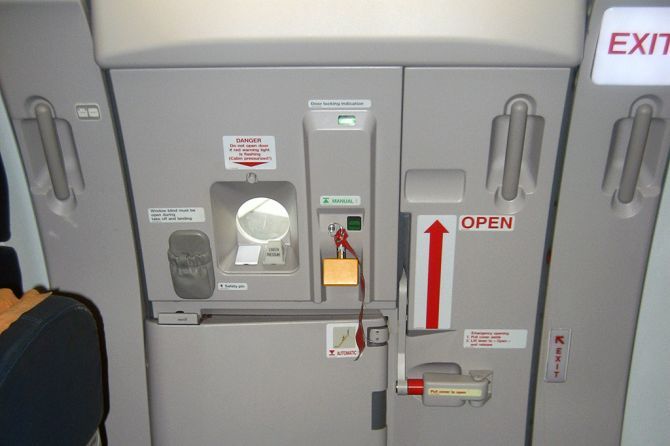 In a bizarre incident, a Scottish man tried to open a KLM plane's door at 30,000 feet, mistaking it for the loo entrance, attracting a fine of 600 euros and a ban from travelling with the airline for five years.

James Gray said airline staff accused him of trying to open the door of the plane he was on while travelling at 30,000 feet.

However, he claimed he only touched the handle after confusing it for the door to the toilet

James, from Alloa, was huckled off the KLM flight from Edinburgh to Amsterdam the moment it touched down at Schiphol Airport, Scotland's Sunday Post reported.

He was whisked away to a nearby detention centre where he spent the night before he was fined 434 pounds (600 euros).

But when he went to fly home he said KLM staff refused to let him on board and said he was banned from flying with them for five years.

He only made it back after a friend paid for him to travel with a rival airline.

"The crew told me to stay in my seat and I was to be arrested when the plane landed. I tried to explain it was a simple mistake. It was a misunderstanding," Gray was quoted as saying by the daily.

"The police came and arrested me. They weren't too friendly," he said.

Gray claimed he spoke to a translator by phone as he was being interviewed by Dutch police.

He also had to borrow money after the fine wiped out his holiday funds.

A spokeswoman for SchipholAirport and a spokesperson for the Royal Dutch Border Police both refused to comment.

KLM said a passenger had been handed over to authorities due to "his misbehaviour" on board.