The masseur who was seen in a video footage giving a massage to Satyendar Jain is not a physiotherapist, but an inmate who is lodged in the Tihar Jail in a rape case, sources said on Tuesday. The claims come days after the Aam Aadmi Party, which had drawn flak over the videos, asserted that Jain was receiving physiotherapy in the jail, where he is in judicial custody for the past five months over money-laundering charges.

Jain could be seen in the purported videos getting back and foot massages in his cell, reading some documents and talking to visitors while lying on a bed.

Mineral water bottles and a remote are also seen.

In one video, he was seen getting a head massage while sitting on a chair.

However, sources claimed that the man, who was seen giving Jain a massage in the videos, was a prisoner named Rinku.

"He is lodged in the prison in connection with a rape case and sections of the Pocso Act. Rinku is not a physiotherapist," the sources said.

AAP leader Gopal Rai alleged that the Bharatiya Janata Party was highlighting matters related to Sisodia and Jain and other sting operations since it does not have any election issues related to Municipal Corporation of Delhi election.

On Jain apparently getting special treatment inside jail, he said: "Amit Shah was in Gujarat jail and at that time, there was a special jail for him. The kind of treatment he got nobody can get ever. This is available on record."

"The issue is not of him (Jain) getting treatment, but the issue is that what treatment will Delhi people give the BJP on December 4," Rai said.

He alleged that the BJP's only agenda was just to tarnish the image of Kejriwal.

"In Delhi, for the last 10 days, there are two parties that are campaigning, while Congress is not part of the battle," Rai said.

"On one side are those who are campaigning on the basis of their work. On the other hand there are those who just want to indulge in mudslinging," he said.

'Shameful @ArvindKejriwal Doctors have confirmed that it is not physiotherapy and moreover the person giving massage to Saryendra Jain in Tihar Jail is a rapist, accused under the POCSO, and not a physiotherapist as claimed and endorsed by you!' Tiwari tweeted.

The Enforcement Directorate had claimed in a court that Jain was getting special treatment, including massage and special food, in the jail.

It provided CCTV footage to substantiate the claim.

Earlier this month, a Tihar jail superintendent was suspended for alleged involvement in providing a special treatment to Jain in the prison. 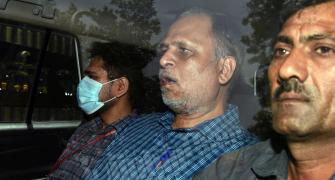 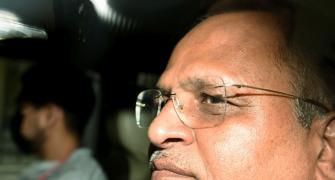 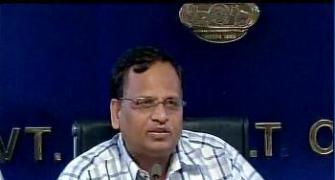 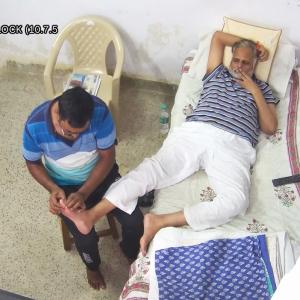 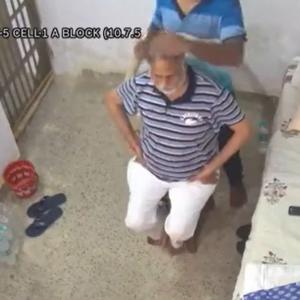