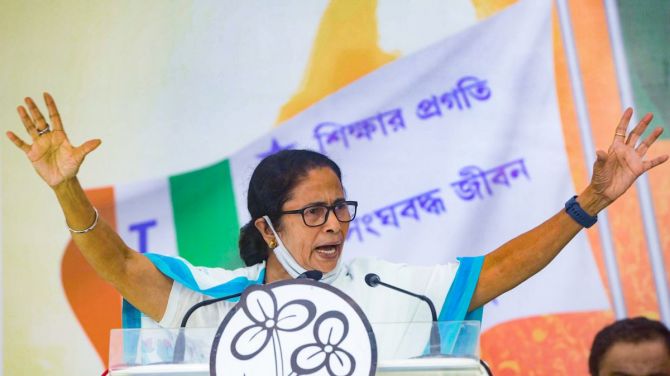 She also accused the Narendra Modi government of trying to 'bulldoze the federal structure' of the country and snatching away the rights of the states.

A combative TMC boss also proposed a meeting of all chief ministers to fight the Centre's 'authoritarianism'.

"The BJP and the Union government can't fight us politically. The party was defeated in the assembly polls, and now they are using central agencies against our leaders like Abhishek Banerjee and others.

"But let me tell them they can't bulldoze or intimidate us with such threats. We will continue our fight against them," Banerjee said.

She was addressing the foundation day programme of TMC Chatra Parishad, her party's students wing.

The Enforcement Directorate has summoned TMC's Diamond Harbour MP Abhishek Banerjee and his wife for questioning in a money laundering case linked to an alleged coal scam in the state.

"If you show us (threaten us with) ED, we will also send proof against BJP leaders to the agency. A section of BJP ministers and leaders is hand in glove with the coal mafia. They even stayed at hotels run by them during elections," she said.

Noting that natural resources like coal are controlled by the central government, Banerjee said, "There's no use pointing fingers at the Trinamool for corruption in coal. It is under the Centre. What about its ministers? What about BJP leaders who looted the coal belt of Bengal, the Asansol region."

Earlier, while addressing the gathering, Abhishek challenged Union Home Minister Amit Shah to fight the TMC politically and save the ruling BJP in Tripura from defeat in the 2023 assembly polls.

"The BJP and the Centre feel they can put pressure on us by using ED and CBI against us, but we will emerge stronger. We are not afraid of BJP. We will fight them politically.

"I challenge Amit Shah to fight against us politically and save the BJP government in Tripura from certain defeat in the 2023 assembly polls," he said.

Abhishek, a nephew of Banerjee, accused the saffron party of 'killing democracy', and said the TMC would go to all states and fight for people.

While referring to the 'delayed' release of Rashtriya Janata Dal leader Lalu Prasad from jail, Mamata Banerjee said it was done to stop him from campaigning in the Bihar elections.

"I have been in politics all my life. But never in my political career, I have come across a more vindictive political party than the BJP. Look at what they did with Lalu Prasad ji in Bihar. They put him behind bars as they were unable to fight him politically. We know the tricks that they are using to put opposition leaders behind bars," she said.

Banerjee, who has grown in stature after her party's resounding victory in the West Bengal assembly polls, proposed to convene a meeting of all state chief ministers to discuss how the 'Centre is violating the spirit of federalism'.

"Every day, they are disturbing Udhav Thackery and Arvind Kejriwal. This is unacceptable. If all the CMs agree, then I will call a meeting to discuss the violation of the federal structure by the Centre," she said.

Banerjee, who had also criticised the National Monetisation Pipeline (NMP) plan on Wednesday, said, "The government is trying to sell off the entire country. Railways, airports, and ports, they want to sell off everything. Can you sell the soil of the country?"

Banerjee alleged 'impartial institutions' like the NHRC have been misused by the central government to 'tarnish opposition-ruled state governments'.

"In (West Bengal) post-poll violence, five BJP workers and 16 TMC workers had died. We have no problem with CBI, but why are they taking along BJP leaders with them to villages? NHRC and all other institutions have been politicised. The members are from BJP," Banerjee said.

The fiesty TMC boss wondered why Governor Jagdeep Dhankhar was silent on these issues but made 'hue and cry when committees are formed in the state and blackmails (her government) that until his nominees are included in the committees, he won't sign the papers'. 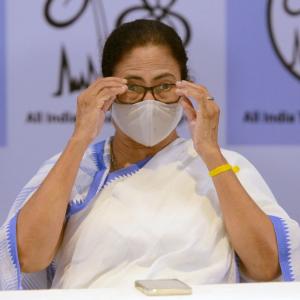