News
Business
Movies
Sports
Cricket
Get Ahead
Money Tips
Shopping
Sign in  |  Create a Rediffmail account
Rediff.com  » News » Mamata vs CBI: All you need to know about the showdown

With the Supreme Court ordering Kolkata Police Commissioner Rajeev Kumar to appear before the Central Bureau of Investigation, the agency will finally be able to question the top cop in cases arising out of the Saradha chit fund scam probe. 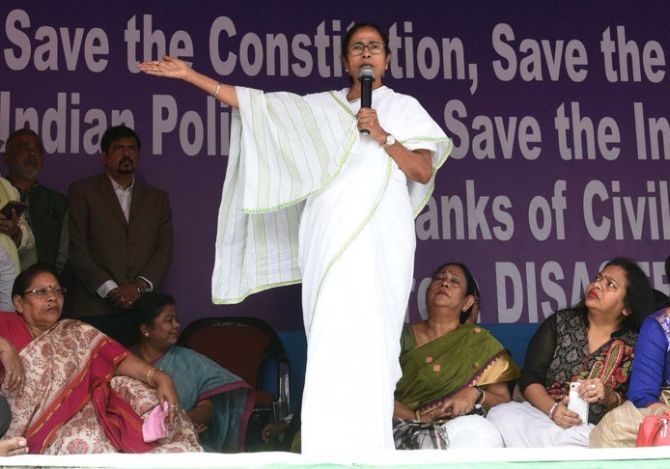 The CBI's move to send a team to Kolkata to question Police Commissioner Rajeev Kumar has led a major showdown between the government of Chief Minister Mamata Banerjee and the Centre.

The CM has been sitting on a ‘Save the Constitution’ dharna since Sunday night, and Union Home Minister Rajnath Singh terming the situation as a "constitutional breakdown".

Here's all you need to know about the unprecedented chaos and confrontation between the state government and the Centre.

Why is Mamata Banerjee sitting on a dharna

The showdown began after CBI officials landed at Kolkata Police Commissioner Rajeev Kumar's Loudon House residence on Sunday to question him in connection with the Saradha chit fund scam.

Last year, West Bengal had withdrawn ‘general consent’ granted to the CBI, effectively curtailing the agency’s powers in the state without prior permission.

Consequently, a team of Kolkata police officers rushed to the spot to speak to CBI officials and tried to inquire if they had the requisite permission to question Kumar.

The Kolkata cops prevented the CBI team from entering Kumar's residence and forcefully took them to a nearby police station, where they were detained for some time.

Amidst all this drama, Banerjee reached Kumar's residence and, after a meeting, addressed the media accusing Prime Minister Narendra Modi, Bharatiya Janata Party chief Amit Shah and National Security Adviser Ajit Doval of ‘misusing’ the CBI against her as she had led the grand opposition rally in Kolkata a few days ago.

She declared that she will stage a dharna to protest this action.

"This is a satyagraha and I’ll continue (it) till the country is saved... Constitution is saved," she said at the protest site.

Why the CBI went to Kolkata

According to the CBI, Kumar was not responding to notices to appear before the agency.

The agency said it has been trying to locate Kumar to question him in connection with the scams, and that they might have to arrest the Kolkata police chief as a last resort.

Banerjee responded to this by terming Kolkata police commissioner ‘among the best in the world’ and accusing the BJP leadership of pursuing the ‘worst kind of’ political vendetta.

The probe was transferred to the CBI in 2014 on the orders of the Supreme Court.

The central agency accuses Kumar of destroying important documents and evidences related to the scams.

The agency said it was trying to reach Kumar for questioning regarding the charges but he was being evasive.

However, the Kolkata police countered the claims.

What are Saradha and Rose Valley scams

Saradha and Rose Valley groups ran ponzi schemes which collapsed, resulting in a loss of billions of rupees to millions of investors.

The schemes followed the standard chit fund scheme model where old investors are paid returns by investment generated by new ones.

However, as fresh investments stopped, the schemes collapsed.

The people who ran the Saradha group were allegedly close to the ruling Trinamool Congress.

Prominent TMC politicians, including two MPs -- Kunal Ghosh and Srinjoy Bose -- and former state minister Madan Mitra were arrested for their alleged involvement in the scam.

Banerjee, one of the prime movers behind the effort to cobble together an anti-BJP alliance ahead of the Lok Sabha polls, claimed the CBI knocked on the doors of Kumar without a search warrant.

She alleged the Centre wants to impose President's rule in whatever states the opposition is in power.

Banerjee asked all opposition parties to unite to bring down the Modi government and, in a rare exhortation by a political leader, called upon personnel of security forces of the Centre and states, besides the Army, to "condemn" the attitude of the Modi government.

In a tit-for-tat move, a team of Kolkata police officials also cordoned off the CGO Complex-- the state headquarters of the CBI.

CBI officer Srivastava said, "I have also been detained and there are police officers standing outside my house."

Sources in the CBI claimed that hours before going to the residence of Kolkata Police Commissioner, the agency wrote to the local police, informing about its ‘secret operation’ and seeking adequate security for the same.

A letter was written by CBI Inspector Prasenjit Mukherjee to ‘Officer-in-charge’ of Shakespeare Sarani police station, the agency sources said.

'In connection with a secret operation to be carried out at 2, No London Street, ie, the official residence of Sh Rajeev Kumar, the Commissioner of Police, Kolkata Police, by a CBI team today, your assistance by way of providing adequate security at the same place is required,' read the letter, which the CBI says was sent to the local police.

What the Supreme Court said

Ordering Kumar to make himself available before the CBI and 'faithfully' cooperate with the agency in investigation, the apex court said no coercive steps, including the arrest of the Kolkata police chief, will take place during the course of the investigation.

The SC also sought Kumar's response on the allegations that he was tampering with electronic evidence and that the SIT headed by him provided the agency with doctored materials.

The apex court also directed the West Bengal chief secretary, the director general of police and the Kolkata police commissioner to file replies on the contempt pleas filed against them by the CBI. 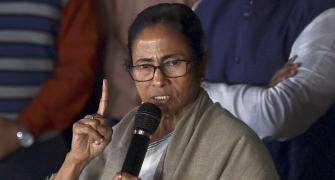