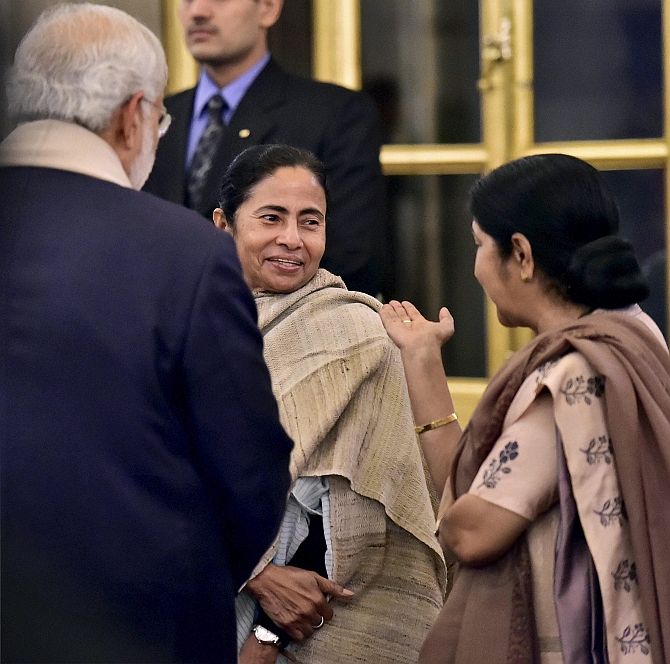 Amid talk of bonhomie between the two, West Bengal Chief Minister Mamata Banerjee has decided to accompany Prime Minister Narendra Modi on his two-day visit to Bangladesh beginning June 6.

"The chief minister will go along with Prime Minister Narendra Modi to Bangladesh next month. We hope this visit will strengthen relations between the two Bengals (West Bengal and Bangladesh) and also between the two countries," state's Education and Parliamentary Affiars Minister Partha Chatterjee said.

There was speculation in the media about whether the chief minister will accompany Modi on his first trip to Bangladesh after taking office.

Teesta water sharing issue is likely to come up for discussion during the visit. The Teesta deal was set to be inked during the then Prime Minister Manmohan Singh's visit to Bangladesh in September 2011 but was postponed at the last minute due to objections by Mamata.

"Both the countries will give their approval to it very soon. We are hopeful that we will get full cooperation from West Bengal government", Singh said.

Last week, Bangladesh had hoped that the pact will be inked during Modi's trip.

The Teesta water is crucial for Bangladesh, especially in the leanest period from December to March when the water flow often temporarily comes down to less than 1,000 cusecs from 5,000 cusecs every year.

Asked if the chief minister had given her consent to the Teesta treaty, Partha Chatterjee said, "I am not aware of it and I cannot comment on this matter."

"The prime minister and chief minister will go together and I believe that Bengal's interests will not be compromised," the minister said, adding the people of both countries want good relations.

Earlier, Banerjee had agreed to the Land Boundary Agreement which had been hanging fire for a long time. Parliament had recently passed the historic constitution amendment bill seeking to settle India's 41-year-old border issue with Bangladesh.

The legislation would operationalise the 1974 India-Bangladesh Land Boundary agreement that provides for exchange of 161 enclaves adversely-held by the the two countries.

Modi gave a compensation package of a whopping Rs 3009 crore to West Bengal as part of the Indo-Bangla enclave exchange pact.

After the bitter verbal duels during the Lok Sabha poll campaign, camaraderie between the two was manifest during Modi's visit to West Bengal earlier this month, his first after becoming prime minister.

Besides attending an event in Kolkata where Modi launched three social security schemes, Banerjee met the prime minister at the Raj Bhavan where she urged him for complete waiver of the state's debt.

She was also present at Burnpur in Burdwan district where Modi inaugurated the upgraded IISCO Steel Plant.