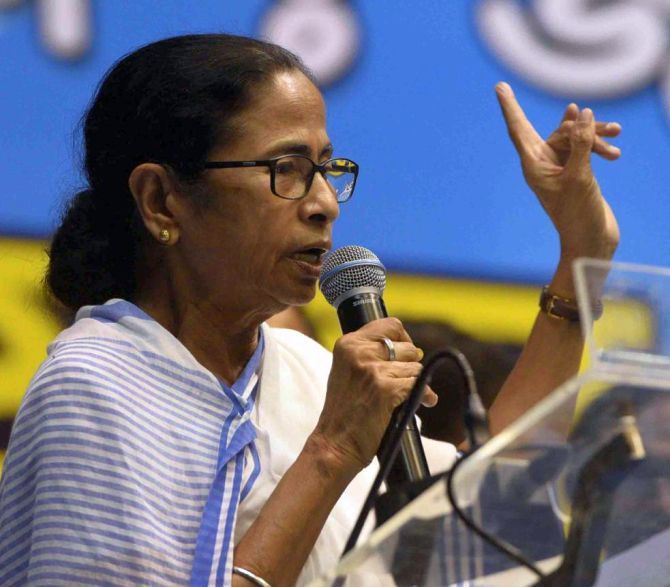 With the National Register of Citizens (NRC) becoming a political hot potato in West Bengal, Chief Minister Mamata Banerjee claimed on Wednesday 11 people have committed suicide fearing loss of citizenship, while senior Bharatiya Janata Party leader Kailash Vijayvargiya asserted the exercise will be undertaken in the state but no Hindu will be deported.

Banerjee, who has often been accused by the BJP of Muslim appeasement, asked Block Development Officers and public representatives to visit every household to assuage the concerns of people about getting stripped of Indian citizenship.

BJP general secretary Vijayvargiya, however, insisted a NRC will be prepared in the state but no Hindu will be left out.

"So many people have died. 11 people have died so far over this NRC panic. I would ask government officials and public representatives to visit every household in their respective areas and allay public fear," she told an administrative meeting at Debra in West Midnapore district.

"There will be no NRC in Bengal," she declared.

The state's Trinamool Congress government has also started issuing advertisements to television and print media asking people not to panic.

A 4-minute audio-visual clip being aired by local TV channels shows Banerjee asking people not to panic or be misled by 'false claims' about NRC.

BJP chief Amit Shah had repeatedly said during the Lok Sabha poll campaign that the NRC exercise, which was limited to Assam, will also be extended to West Bengal.

Banerjee said her government's programme to issue, replace and update ration cards had nothing to do with the NRC, as some people apprehended.

Though the Centre is yet to decide on whether to replicate the NRC exercise in West Bengal, large queues of people are being seen outside the offices of BDOs, borough offices and civic body offices across the state for the last few days to procure documents that could prove that the state has been their place of residence.

"Be 100 percent sure about NRC in Bengal, but Hindus have nothing to fear as we are soon bringing Citizenship (Amendment) Bill in Parliament (to give Hindus who escaped religious persecution in other countries Indian citizenship)," Vijayvargiya told a gathering in Kolkata.

Without naming Banerjee's TMC, which has accused the BJP-ruled Centre and Assam governments of botching up the NRC exercise, as reflected in the exclusion of a large number of Bengali-speaking Hindus, he said some parties and politicians were spreading canards about the same happening in West Bengal.

"As the national general secretary of the BJP, I want to assure all of you that NRC will be implemented but not a single Hindu will have to leave the country. Each and every Hindu will be given citizenship," he asserted.

As long as India's prime minister is Narendra Modi and Union home minister is Amit Shah, Hindu refugees have nothing to worry about, Vijayvargiya said.

"India is not a charity house that those who are the majority community in Bangladesh, Afghanistan and Pakistan (Muslims) can just infiltrate, spread terror and take away the livelihood of our citizens," the BJP's Bengal minder said.

Out of the over 19 lakh people omitted from the final NRC in Assam, which was published on August 31, about 12 lakh are Hindus.

NRC was one of the provisions of the Assam Accord which was signed in 1985.

The accord envisaged identification and deportation of illegal immigrants, especially Bangladeshi settlers.

"The TMC has been opposing NRC to protect Bangladeshi Muslim infiltrators who are its vote bank in West Bengal. But after many Hindus were omitted from the NRC list in Assam, it is trying to project us as anti-Hindu and an anti-refugee party," said a senior state BJP leader, who did not wish to be named.

Amit Shah is scheduled visit Kolkata on October 1 to address a seminar on NRC and the Citizenship (Amendment) Bill.

Manoj Tiwari will have to leave Delhi if NRC is implemented: Kejriwal 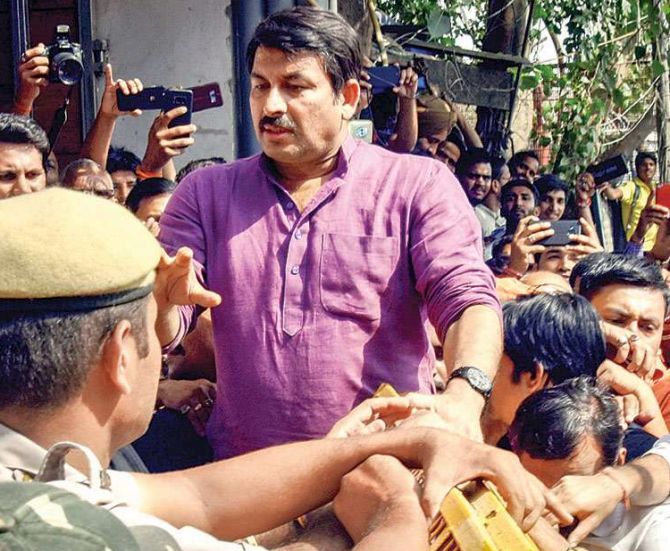 Taking a swipe at Delhi BJP president Manoj Tiwari, Chief Minister Arvind Kejriwal on Wednesday said if the NRC is implemented here, the saffron party leader will be the first to leave the national capital.

The Bhojpuri singer-turned-politician, however, said the remark has exposed Kejriwal's 'real face' and alleged that the Aam Aadmi Party chief wants to evict migrants such as 'Purvanchalis'.

'Purvanchalis' are people from the eastern parts of the country such as Bihar and east Uttar Pradesh, and they play an important role in any election in Delhi.

Responding to a question at a press conference, the chief minister said, "If NRC is implemented in Delhi, Manoj Tiwari will be the first to leave Delhi."

Tiwari, who is the MP from north-east Delhi, also claimed that Kejriwal 'wants to remove people from (West) Bengal, Punjab, Madhya Pradesh, Haryana and other states in Delhi'.

"Does Kejriwal, who is an IRS (Indian Revenue Service) officer, does not know what NRC is? It seems Kejriwal has lost his mental balance," Tiwari said during a Facebook Live interaction.

"This statement exposes Kejriwal's real face. It means he wants to evict the migrants like Purvanchalis from Delhi," he said, adding, "I have criticised him (Kejriwal) for his policies but I never abused him".

In the past, the BJP MP has on several occasions demanded that NRC should be implemented in the national capital on the lines of Assam.

Last month, Tiwari had said the situation in Delhi had become 'dangerous' due to the presence of a "large number" of illegal immigrants including Bangladeshis and Rohingyas who have been found involved in 'criminal activities'.

In a separate press conference, AAP chief spokesperson Saurabh Bhardwaj asked Tiwari if he has a proof of living in Delhi since 1971.

"If he himself does not have the proof then he should not trouble people from Uttar Pradesh, Odisha and Bihar who have come to Delhi looking for employment opportunities," Bhardwaj told reporters.

Bhardwaj further claimed that the three BJP leaders -- Tiwari, Vijender Gupta and Vijay Goel -- keep competing with each other for giving statements, which is a clear sign of infighting in the party.