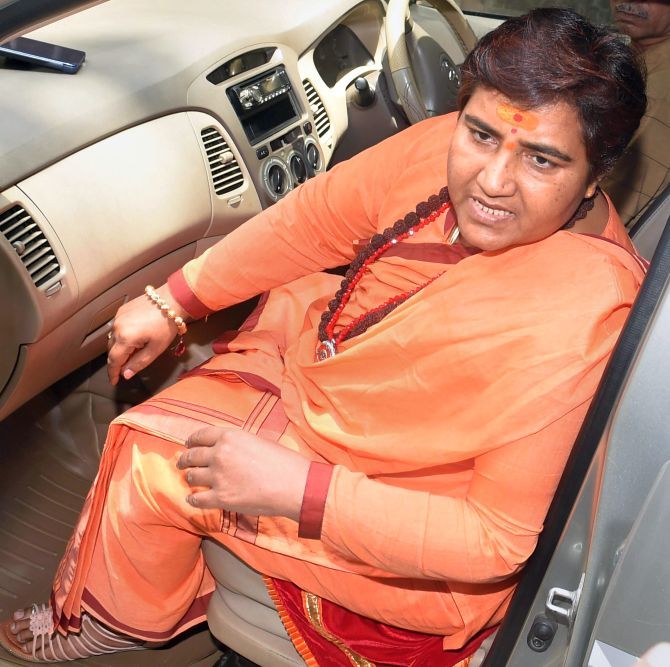 Bharatiya Janata Party MP Pragya Singh Thakur on Friday appeared before a special court in Mumbai in connection with the 2008 Malegaon blast case, after failing twice this week to do so.

When Special National Investigation Agency Judge V S Padalkar asked the saffron-clad Thakur if she has to say anything about the blast, she said, "I don't know."

Supported by two aides while entering the court, Thakur appeared before the special NIA Judge as per the direction of the court which is conducting trial in the 11-year-old case.

Besides her, other accused in the case also attended the court.

The judge read out his order to the accused where he directed them to be present in the court at least once a week.

He said the court has till now examined 116 witnesses, including doctors and 'panchas' (a category of witnesses).

During most of the hearings in the past, the accused were represented in the court by their advocates.

After reading out his order, the judge called Thakur and another accused Sudhakar Dwivedi to the witness box.

Citing statements of witnesses, the judge asked them whether they were aware that a bomb blast had taken place at Malegaon in North Maharashtra in September 2008 where six people were killed.

To this, Thakur replied, "Mujhe jankari nahi hai (I have no information about it)." Dwivedi gave a similar answer.

When asked about the proceeding in the case, the 49-year-old MP said she was not aware about the number of witnesses examined by the court.

A red velvet cloth was put on the bench, where the accused sit, for Thakur to sit comfortably. When the judge called her to the witness box to stand till the order is passed she said she will stand leaning by the window instead of sitting in the chair given by the court.

This was Thakur's first appearance before the court after being elected to the Lok Sabha from Bhopal last month. The last time was during the framing of charges in the case in October last year.

Judge Padalkar had last month directed all the accused, including Thakur, to appear before the court at least once a week.

The judge then had said an exemption from appearance would be granted only if cogent reasons were submitted.

The court is currently recording the testimony of witnesses in the case.

Seven persons, including Thakur and Lt Col Prasad Purohit, are facing trial in the case.

On Monday, the special court rejected application of Thakur, who defeated Congress veteran Digvijay Singh from Bhopal, for exemption from appearance in the court this week.

The 49-year-old Hindutva activist had sought the exemption for completing formalities relating to her election to Parliament, but the court said her presence is necessary at this stage in the case.

On Thursday, her lawyer Prashant Magoo told the court she is suffering from high blood pressure and is unable to travel to Mumbai from Bhopal.

The court granted her exemption for the day and asked her to appear before it Friday.

Thakur was hospitalised for a stomach ailment in Bhopal Wednesday night and discharged early Thursday.

Six people were killed and over 100 injured when an explosive device strapped to a motorcycle went off near a mosque in Malegaon, a power-loom town in north Maharashtra, on September 29, 2008.

According to police, the motorbike was registered in Thakur's name and that led to her arrest in 2008.

The Bombay high court granted her bail in 2017.

Thakur was given a clean chit by the NIA, but the trial court refused to discharge her from the case.

The court had dropped charges against her under the Maharashtra Control of Organised Crime Act (MCOCA), but she is being tried under the Unlawful Activities (Prevention) Act (UAPA) and other relevant laws.

The accused are facing trial under various sections of the UAPA, the Indian Penal Code and the Explosive Substances Act.

They are also facing charges under IPC sections 120(b) (criminal conspiracy), 302 (murder), 307 (attempt to murder), 324 (voluntarily causing hurt) and 153(a) (promoting enmity between two religious groups).

Pragya refuses to sit in court, complains about dust

BJP MP Pragya Singh Thakur on Friday chose to stand for around two and a half hours in the special court conducting trial in the 2008 Malegaon blast case.

Thakur expressed disapproval about the chair that was offered, and the state of cleanliness of the courtroom.

The MP, who has been given bail by the high court on medical grounds, entered the court around 12.45 pm assisted by her aides.

Initially special judge V S Padalkar asked her to sit in the enclosure for the accused at the back of the room. Before she sat on the wooden bench inside the enclosure, her aides spread a red velvet cloth.

Thakur sat there with co-accused Sudhakar Dwivedi and Sameer Kulkarni.

Later, when the judge called her to the witness box in the front and asked if she wanted a chair, Thakur said she preferred to stand leaning against the window.

Recess was called after about 15 minutes. When the proceedings resumed, the judge again asked, "I am asking on humanitarian grounds, (do) you want to sit or stand?"

Thakur said she had a throat infection because of which she had problem hearing. Then the judge ordered to place a chair near the witness box, saying she could sit if she wanted.

However, Thakur continued to stand near the witness box for the next around two and a half hours.

After the proceedings ended and the judge left, Thakur bemoaned what she called as the "lack of facilities" in the courtroom.

"This is not the way to treat people after calling (them to court)....there is no proper place to sit or stand here," she said.

Pointing to the chair offered to her, she said, "This is the chair to sit? If I sit on it, I would end up on bed (become bed-ridden)."

Saying she was unable to stand for a long time, she wondered what was the judge trying to prove by offering her such a chair.

"Jab tak saza nahi hoti baithne ko jagah do baad main chahiye to fasi de do (Till I am sentenced, provide me place to sit. Later you can hang me if you want)," she said.

Some lawyers wondered why the chair -- which had a cushion and armrest, did not meet Thakur's approval.

Thakur also raised a stink over the cleanliness in the courtroom.

"There is no space to breathe...there is dust wherever I touch....I am allergic to everything. Yahan jhadoo nahi lagti kya (Doesn't anyone sweep the room)?" she said.

Her lawyers mollified her saying she can file an application (to get better facilities) and took her out of the courtroom.

They told reporters that Thakur raised these issues because of her medical condition. 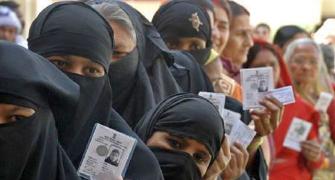 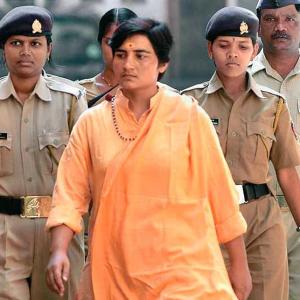