Moments after the announcement of her candidature, she tore into Digvijay Singh, holding him responsible for defaming "Sanatan Dharma".

Out on bail, Thakur has been discharged by a court on charges under the stringent Maharashtra Control of Organised Crime Act in the 2008 case, but is still facing trial under other criminal provisions including the Unlawful Activities (Prevention) Act.

The BJP's choice of the 48-year-old saffron activist underlines its efforts to corner the Congress as its top leaders, including Prime Minister Narendra Modi and party chief Amit Shah, have often accused the opposition party of coining the "Hindu terror" phrase and slapping "false" terror cases on Hindutva activists when the United Progressive Alliance was in power.

At a rally in Odisha, Shah described Digvijay Singh as the "creator" of "saffron terror" phrase. The BJP has decided to take the matter to the "people's court" by fielding Thakur against Singh, he said, accusing the Congress of defaming India by coining terms like "Hindu terror" and "saffron terror".

Digvijay Singh has been a bitter critic of the Rashtriya Swayamsewak Sangh, the ideological guide of the BJP, and had allegedly linked it to 2008 Mumbai terror attack carried out by Pakistani terrorists.

Bhopal, which has a strong Muslim presence, has been a BJP citadel as the party has held it uninterrupted since 1989.

Among other candidates, the BJP has named Raj Bahadur Singh and Ramakant Bhargav as its nominees from Sagar and Vidisha, respectively.

External Affairs Minister Sushma Swaraj had won from Vidisha in 2014 but she had announced that she will not fight the polls this time due to health reasons.

K P Yadav will be the BJP nominee from Guna, which is held by senior Congress leader Jyotiraditya Scindia who is contesting again from here. 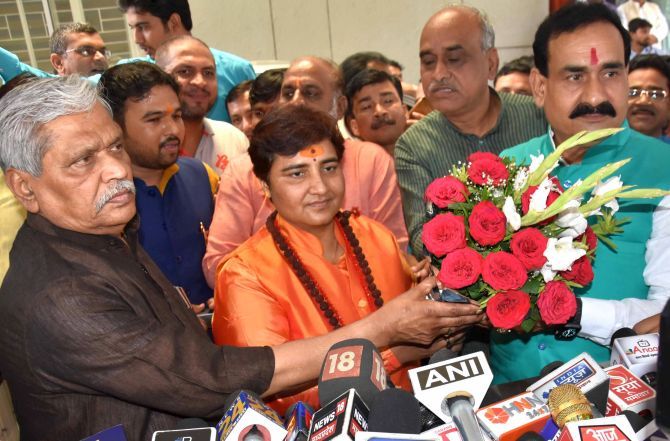 Several BJP leaders hailed the party's decision to field Thakur in the polls.

Its vice president Vinay Sahasrabuddhe said she "symbolises the fighting spirit of a woman, the courage for braving unspeakable torture for victory of truth and above all our relentless struggle to free democracy from crass vote bank politics".

Hindutva votary and another party leader Subramanian Swamy said Thakur had "suffered enormously" and was a "victim" of Congress agenda.

Calling her innocent and devoted to religion, Swamy played down other charges she is facing, saying "those are in final stages of being dismissed". Speaking to the media after the announcement of her candidature, Thakur tore into Digvijay Singh.

"He (Singh) has sown the seeds of defamation of our Sanatam Dharma (Hinduism) and the saffron. He termed the saffron and Hindutva as terrorism," Thakur alleged.

Referring to her incarceration in the Malegaon blast case, she alleged that "They (the then Congress government) misused the law, disrespected a woman, and tortured me unlawfully".

"I will ensure that the country remains secure, and those who are talking against the nation should now beware," she said.

As to the Malegaon case, Thakur said she had got a "clean chit", and all the conspiracies against her had failed.

Digvijay Singh took to Twitter to 'welcome' her to Bhopal. "I pray to Maa (goddess) Narmada for Sadhviji and seek blessing from Narmadaji so that we all walk the path of truth, non-violence and religion. Narmada Har (glory to the Narmada)," he tweeted. 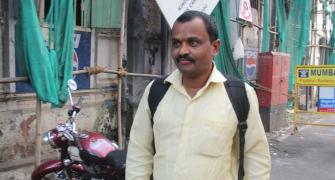 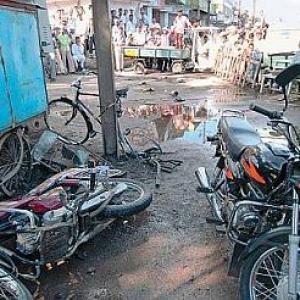