Vaihayasi Pande Daniel reports on all the action that unfolded at the NIA court hearing the 2008 Malegaon blast case. 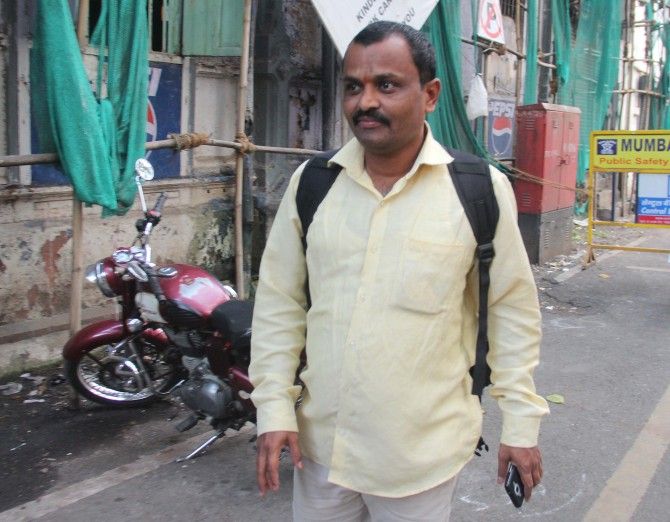 IMAGE: Praveen Takalki walks out of the Mumbai sessions court on Wednesday, December 27, 2017, after being discharged in the 2008 Malegaon blast case.
Along with him, Shyam Sahu and Shivnarayan Kalsangra were also discharged. Photograph: Sahil Salvi

The National Investigation Agency court in Mumbai was expected to pronounce its order on the framing of charges against the 12 accused in the 2008 Malegaon blast case when it reconvened after lunch at 2.45 pm on Wednesday, December 27, 2017.

But Special NIA Judge Shripad D Tekale, who was still working on his order when the court re-convened, issued the order past 4 pm although anticipation had been steadily building right from the morning.

A large bank of television cameras was in place at the barrier outside the Mumbai civil and sessions court's modern annexe in anticipation of the verdict, from before 11 am. OB vans crowded the lane that approaches the court building.

Post-lunch, lawyers, the police, journalists, relatives/associates of the 12 accused, Accused No 5 Sameer Sharad Kulkarni (who is out on bail) and Accused No 7 Rakesh Dattatray Dhawde (the only accused not out on bail, since he apparently did not apply for it), waited tensely in Courtroom 52.

Judge Tekale actually presides over Courtroom 26 on the 5th floor, two floors above, but since it is being painted, he currently shares Courtroom 52 with Judge Sunil Kumar Sharma.

Journalists were not allowed in Judge Tekale's courtroom, by order, through this trial. They could report on the State of Maharashtra vs Pragyasingh Chandrapalsingh Thakur @swami ant14, but were barred from entering the court.

Wednesday too, reporter after reporter, from dozens of news outlets, hung around in the corridor outside or waited at the door, peeking into the court, practically falling in, wondering when the order would be announced.

Every time the judge rang his call bell from his chambers adjoining the court or the door of the judge's chamber opened, a momentary hush shrouded the room and hallways. But it was usually a false alarm as an apologetic peon emerged or the sari-clad clerk/assistant popped along, indicating that the judge still needed a little more time.

When Judge Tekale finally swept in, before he would begin pronouncing his order, being delivered nine years after the alleged crime, his attention was seized by an excited, agitated, Kulkarni.

Apparently one of the lawyers representing the accused, sitting in front at the advocate bench, perhaps to while away time as they waited, decided to take a selfie and inadvertently (or not) got Kulkarni in the frame too.

Kulkarni was vociferous in denouncing the lawyer who he said should know better being a legal man.

Judge Tekale, who is known to be a strict judge but was all smiles on Wednesday, pacified him and began reading out his order. For many of the journalists hanging just outside the door, much of what the NIA judge said or the queries the lawyers put to him were inaudible, especially above the racket in the hallways and the noise of construction happening within the court premises.

Special permission had been sought for the media to be allowed in for the hearing of the verdict, but it was not granted. They were later allowed in after the order had been announced. When asked if it could be read by the journalists, Judge Tekale said, "The original document cannot be given to you."

Of the 12 accused, three were totally discharged -- Shyam Sahu, Shivnarayan Kalsangra and Praveen Takalki -- while the others got what Judge Tekale termed a partial discharge, in the sense that they were discharged from this court, with the Maharashtra Control of Organised Crime Act charges against them being dropped.

They were 'hereby discharged from offences punishable under' certain sections of MCOCA and will instead be tried in another court under the Unlawful Activities Prevention Act for activities amounting to terrorism and conspiracy.

Jagdish Mhatre, a Dombivli builder, and Dhawde -- who sports a bushy beard, has his long hair rolled in a little bun, round Gandhi spectacles perched on his nose -- will face trial under the Arms Act and not the harsher MCOCA under which they had been detained all this time.

Except Kulkarni the other six were not present in the courtroom on Wednesday.

In all, 12 persons were arrested for their role in a blast that occurred on September 29, 2008, at Bhiku Chowk in the Muslim-dominated textile town of Malegaon in Nashik district, that killed 6 people and injured 100.

The verdict had Dhawde, who is being housed in Taloja jail, north of Mumbai, rather anxious. He approached the judge requesting permission to not be transferred to a Pune jail.

Judge Tekale clarified that though the matter was being transferred to a Pune court, it did not imply Dhawde would be transferred too. Mhatre, on the other hand, will be tried in a Thane court.

Dhawde's advocate sister, dressed in white, was in court supporting him. Dhawde displays a very humble, reverential, demeanour. Each time he exits the courtroom he opts to move in the reverse, repeatedly doing pranams to the judge and bowing his head.

The Bhind, Madhya Pradesh-born Pragya, the daughter of an Ayurvedic doctor, was not in the courtroom on Wednesday and was represented by her brother-in-law Bhagwan Jha, who on hearing the verdict said that Maharashtra's anti-terrorism squad, which investigated the crime, had "framed Sadhviji" and was disappointed she was not discharged.

Fresh charges will be drawn up by the court against the seven being tried under UAPA on January 15. 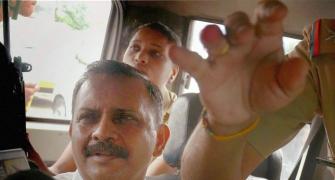 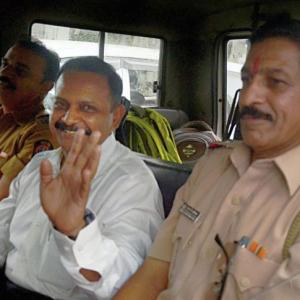