Even though MLAs are required to show their ballot to respective party whips before casting their vote, all parties have ensured their MLAs are housed in five star hotels close to the Maharashtra Vidhan Sabha where voting will take place on June 10.

Out of the six Rajya Sabha seats being contested from Maharashtra the tug-of-war between former allies the Shiv Sena and the Bharatiya Janata Party is only for one seat with the Maha Vikas Aghadi and BJP claiming to have the requisite numbers to send three and two candidates respectively to the Rajya Sabha.

The contest then is between Maharashtra Chief Minister Uddhav Thackeray and Leader of the Opposition Devendra Fadnavis through their proxies Sanjay Pawar and Dhananjay Mahadik, both from Kolhapur. The Shiv Sena had refused a nomintion to former Raja Sabha MP Chhatrapati Sambhaji, also from Kolhapur, unless he joined the party.

"It is a prestige battle more than anything else," an Nationalist Congress Party leader, who did not wish to be named, tells Prasanna D Zore/Rediff.com. "And Fadnavis knows he will lose this battle because we have the support of Independent MLAs and smaller parties to help (Sanjay) Pawar sail through."

"Do you think we would have nominated Mahadik if we weren't confident of his victory?" asks a senior state BJP leader.

"We have been in touch with almost all the Independents," he adds. "We always keep our communication lines open," he says when asked if the BJP is trying to woo MVA MLAs to its camp.

The victory of the sixth candidate then depends solely on 13 Independent MLAs and 16 legislators from smaller parties. And these are the same set of lawmakers who were in demand during the formation of the MVA government in November 2019.

"If you see the figures, then we are short of 13 votes and the MVA is short of 14 votes. In the last seven days Independents have been complaining about how badly they have been treated by the MVA government. I am sure that Devendra Fadnavisji's charisma, hard work and these upset Independents will help me win the sixth seat," says Mahadik, a former NCP Lok Sabha MP from Kolhapur.

"I have spoken to all the Independents and MLAs of all the political parties recently," Mahadik adds.

Every candidate must secure 41 preference votes to get elected to the Rajya Sabha. According to this base figure, the MVA will need 164 votes to get all its four candidates past the post and the BJP will need 123 votes to win three seats.

The MVA currently has 151 MLAs -- the Shiv Sena (55; one of its MLA Ramesh Latke died recently); the NCP (52; two of its ministers Nawab Malik and Anil Deshmukh are in jail and have sought the court's permission to vote in the Rajya Sabha poll) and the Congress (44).

The BJP has 105 MLAs, hence both political formations have been wooing the 13 Independents and 16 MLAs of smaller parties like the Samajwadi Party (2), Asaduddin Owaisi's All India Majlis-E-Ittehadul Muslimeen (2), Bachchu Kadu's Prahar Janshakti Party (2), and one MLA each from the Krantikari Shetkari Paksh of MLA Shankarrao Gadakh, the CPI-M, the Maharashtra Navnirman Sena, the Rashtriya Samaj Paksh and the Swabhimani Paksh.

"Our MLAs will vote for any formation that accepts our conditions," says Syed Imtiaz Jaleel, the AIMIM's Lok Sabha MP from Aurangabad.

"Both the Shiv Sena and BJP are our ideological opposites, but we will support them if they accept our conditions related to development issues in Aurangabad," Jaleel says about ideology taking a back seat over development.

"None of the two have yet approached us. Let them come to us and we will see," adds Jaleel. According to him, the AIMIM has formed a core committee to look into this aspect but will come to a decision by Friday, voting day.

While the AIMIM has decided to reveal its cards only at the last minute, the MVA claims to have the support of Bachchu Kadu's PJP, the KSP and independents like Manila Gavit (Sakri), Ashish Jaiswal (Ramtek), Chandrakant Patil (Muktainagar), Narendra Bhondekar (Bhandara), and Geeta Jain (Mira-Bhayender).

The BJP is confident of winning the support of Ravi Rana (Badnera; he and his wife Navneet Rana, an MP from Amravati, were recently arrested by the MVA government for disturbing public order but have been released on bail), Rajendra Patil (Shirol), Mahesh Baldi (Uran), Rajendra Raut (Barshi), Pakash Awade (Ichalkaranji), Kishore Jorgewar (Chandrapur), and Sanjay Shinde (Karmala).

"I will vote for Sanjay Pawar," says Geeta Jain, former BJP mayor, who has pledged her support to the Shiv Sena this time.

"We have been in touch with Samajwadi Party leader Abu Azmi and he has assured the MVA that the two SP MLAs will vote for the MVA candidate," confirms a Shiv Sena leader.

The victory of NCP's Praful Patel, the Congress's Imran Pratapgarhi's, the Shiv Sena's Sanjay Raut and the BJP's Piyush Goyal, the Union minister for commerce, textiles, industry and consumer affairs, and Anil Bonde is a foregone conclusion as the state sees a contest for the Rajya Sabha polls after a gap 24 years.

Interestingly, in 1998, Ram Pradhan of the Congress lost the contest because of cross voting by party MLAs as the ballot then was cast in secret.

This time, even though MLAs are required to show their ballot to respective party whips before casting their vote, all parties have ensured their MLAs are housed in five star hotels close to the Maharashtra Vidhan Sabha where voting will take place on June 10.

As per Rajya Sabha rules one-third of its not more than 250 members -- 238 of which are elected indirectly by elected members of a state's legislative assemblies; 12 members are nominated by the President of India -- retire every two years and an equal number of members are elected in their place.

Once elected, a Rajya Sabha MP has tenure of six years.

57 Rajya Sabha seats from 15 states of the Indian Union will go to the polls on June 10. The results of these 57 seats are likely to be announced an hour after voting is closed.

Along with Lok Sabha MPs and members of legislative assemblies and legislative councils of respective states, the Rajya Sabha MPs form the electoral base for the Presidential election in July when Ram Nath Kovind's tenure ends. 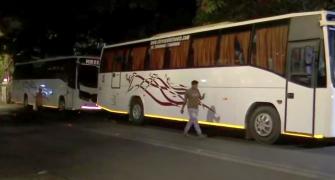 Sena moves its MLAs to hotel ahead of RS polls 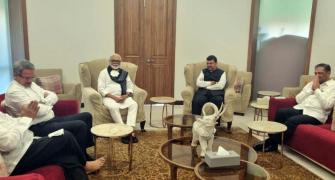 Talk to us for support in RS polls: Owaisi to MVA 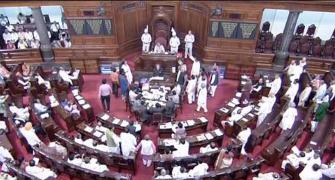 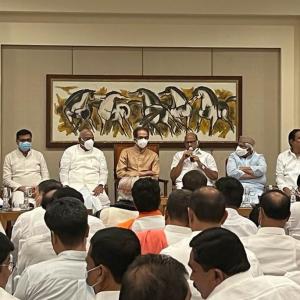 RS poll: Parties sweat it out to keep flock together 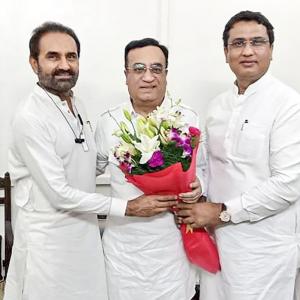 BJP, Congress in dogfight in 4 states over RS polls