The 'Maharashtra bandh' called by the ruling Maha Vikas Aghadi partners to protest the death of farmers in Uttar Pradesh's Lakhimpur Kheri received a mixed response on Monday with the shutdown getting traction in major cities like Pune and Mumbai, but life remained largely unaffected in rural and semi-urban areas. Barring stray incidents of violence like stone pelting, the shutdown called by the MVA allies Shiv Sena, the Congress and the Nationalist Congress Party was largely peaceful.

In Mumbai, which has a considerable Sena influence, shops and other commercial establishments, barring those engaged in selling essential items, remained shut.

In the metropolis, police registered two FIRs, arrested 28 persons for staging protests during the day-long bandh and for violating COVID-19 norms, and released them on bail later, an official said, more than 200 people were also detained.

Leaders of the MVA claimed the bandh was '100% successful', but the opposition Bharatiya Janata Party alleged the shutdown was 'imposed' on people using government machinery.

The buses of the Brihanmumbai Electric Supply and Transport (the transport service of the Mumbai civic body) and many of the traditional 'black-yellow cabs' remained off the roads, which led to huge crowds of commuters at stations of suburban trains whose operation remained unaffected.

The BEST bus services were suspended after incidents of stone pelting at some places in the metropolis.

Nearly a dozen buses were damaged in Dharavi, Mankhurd, Shivaji Nagar, Charkop, Oshiwara, Deonar and near Inorbit Mall in Mumbai early in the morning, the transport body said in a statement. 'The black-yellow taxis were operating, but their number is very less. Taxi operations outside the city airport were unaffected,' said A L Quadros, general secretary of the Mumbai Taximens' Union.

A BEST spokesperson said they operated 1,833 buses, as against around 3,000 buses operated normally, till 6.45 pm.

A total of 11 buses, including one leased bus of a private operator, were damaged, he said. "Of the 18,947 bus schedules, only 2,885 schedules, means 15.23 per cent of the total, were cancelled due to the bandh," he said, adding the highest number of schedules were cancelled in Buldhana district followed by Latur and Kolhapur.

Meanwhile, BEST union leader Shashank Rao claimed over 70 per cent of the employees of BEST reported to work, but the buses were not brought out on roads by the administration 'for the reasons best known to them'.

Passengers, however, faced huge inconvenience as the BEST buses remained off the roads.

Some people complained that autorickshaw and taxi drivers charged exorbitant fares taking disadvantage of the situation.

"I wasn't able to travel to work as BEST buses were off the roads. As I am not authorised to travel on suburban trains (only fully vaccinated are being given passes), I was forced to work from home," said Santosh Palve, an executive in a private firm at Chembur in northeast suburb who travels to work from Lalbaug in central Mumbai.

Hemant Pawar, a Ghatkopar resident, said it was difficult to get an auto-rickshaw to and from the (suburban) railway station in the morning.

"First I walked to Ghatkopar station from home after I struggled to get an auto and later on walked 2 km from station to office at Malad in scorching heat," Pawar said. According to the official, Kandivali and Samta Nagar police registered two FIRs naming 14 people each.

They were booked under relevant sections of the Indian Penal Code (IPC) like 188 (disobeying order of public servant) for violating coronavirus-related norms and other offences.

Also those arrested were later released on bail, he said.

More than 200 people were detained under the Mumbai Police Act from different parts of the metropolis, the official added. However, the life crawled back to normalcy in the metropolis in the evening.

Top leaders of the NCP -- state president and senior minister in the MVA government Jayant Patil, his cabinet colleague Nawab Malik and NCP MP Supriya Sule -- staged a protest at the Hutatma Chowk in south Mumbai, holding placards and raising slogans against the BJP governments in Uttar Pradesh and at the Centre.

Shiv Sena MLAs, too, staged a protest in support of the bandh.

However, Maharashtra Water Resources Minister Jayant Patil said the state government had no connection with the bandh, which began at Sunday midnight, as it was called by the ruling parties.

Essential services were kept out of the bandh's purview, he said.

"So they are backing us," Jayant Patil told reporters earlier in the day. Talking to reporters, Shiv Sena leader Sanjay Raut said, "The bandh was 100 per cent successful. People have wholeheartedly participated in the bandh."

On reports of violence during the shutdown, Raut said, "Such minor incidents take place during protests all over the world."

He said all the three MVA parties participated in the bandh will full force.

Traders, too, participated in the bandh as a mark of protest against the BJP government at the Centre for 'crushing' them with the 'Gabbar Singh Tax', Patole said, referring to the Goods and Services Tax (GST)

Hitting out at the Shiv Sena-led MVA over the bandh, the BJP said the three-party dispensation's concern for farmers is 'pure hypocrisy' and it 'imposed' the shut down using government machinery.

The opposition party claimed the shutdown was organised in order to divert attention from the recent I-T raids on premises linked to relatives of Deputy Chief Minister and senior NCP leader Ajit Pawar. 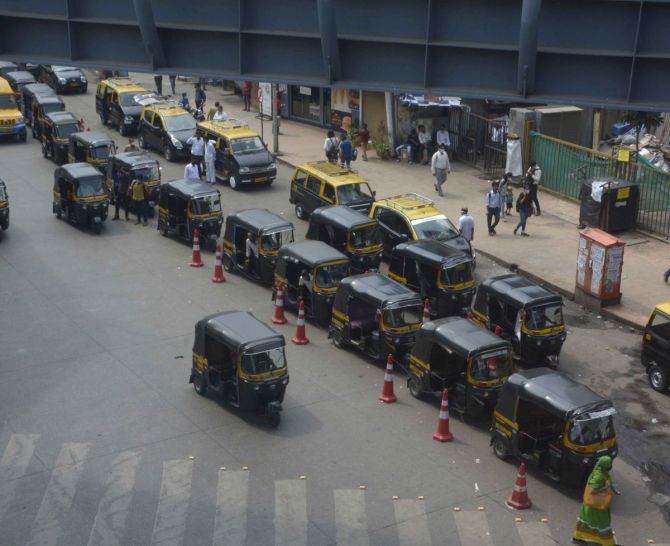 Devendra Fadnavis, the Leader of Opposition in the Assembly, said if the government was so concerned about farmers, then it should first provide relief to those affected due to unseasonal rains in Vidarbha and Marathwada regions.

Eight people, including four farmers, died when violence erupted at Lakhimpur Kheri on October 3 during a protest by agriculturists.

In Thane district neighbouring Mumbai, which has a clutch of satellite cities, shops and commercial establishments remained closed and roads at many places wore a deserted look.

Civic buses, too, remained off the roads, while a few auto-rickshaws were seen plying in some places.

Activists of the ruling allies, carrying placards and banners, took out morchas in Thane city, Navi Mumbai, Kalyan (in Thane) and Vasai (in Palghar) towns and raised slogans to protest the killing of farmers in Lakhimpur Kheri.

At many places, protesters forced shopkeepers to down their shutters. 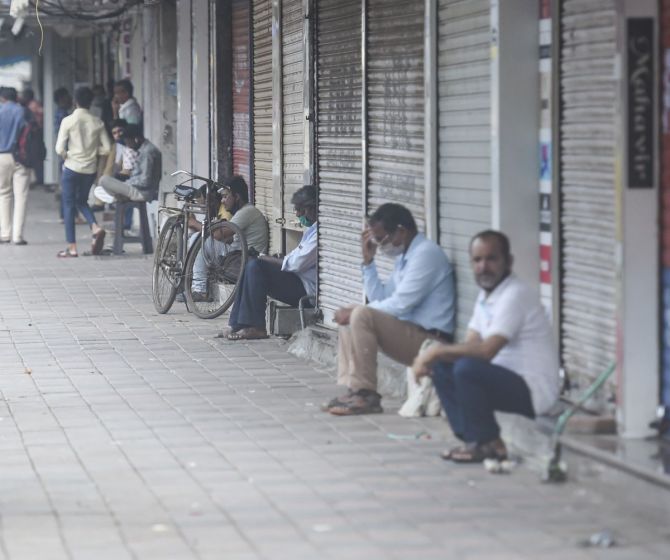 In Kalyan city in the Thane district, local Shiv Sena leaders forced the closure of shops and other activities.

The bandh evoked a good response in Chandrapur city, where shops and hotels remained closed.

In the city, Shiv Sena workers ransacked a 'Shiv Bhojan' hotel located near the bus stand.

Notably, this hotel chain provides food at a cheap rate to underprivileged people under the Shiv Bhojal Thali (food plate) scheme of the MVA government.

Local Congress MP Suresh alias Balu Dhanorkar led a motorcycle rally in Chandrapur, where a separate rally was organised by the NCP.

In Pune, another metro city, most of the shops and commercial establishments remained closed.

Activists of the MVA parties staged protests in several parts of the Vidarbha region, including Nagpur, its largest city.

Congress's Nagpur chief Vikas Thakre along with other party leaders and workers took out a rally and appealed to shopkeepers to close their establishments. In Gondia, the business fraternity refrained from closing their establishments during the festive season.

Except for a few shops, most of the other commercial outlets were open as usual.

In Yavatmal, demonstrations were staged at the Azad Maidan where Congress leader Manikrao Thakre, as well as leaders of the Shiv Sena and the NCP participated.

In Buldhana, all major markets were closed for some time on the appeal of MVA leaders, but opened later. IMAGE: : Shiv Sena and NCP workers take out a rally during the bandh in Thane. Photograph: PTI Photo

In Amaravati, major markets were open. Only a few shops were closed for sometime, but they, too, opened after a while.

In Aurangabad district of the Marathwada region, the MVA allies organised a joint march from Kranti Chowk to Gulmandi, and later moved to Shahgunj area.

In Hingoli, Shiv Sena workers submitted a memorandum at the district collectorate, demanding action against the accused in the Lakhimpur Kheri incident.

The bandh evoked mixed response in Nashik. Buses, autorickshaws and taxis were running as usual on several routes of the district, officials said.

Units in industrial areas in Satpur and Ambad within Nashik civic limits and Gonde, Igatpuri, Sinnar, Dindori in Nashik district were open, though the staff attendance was thin, officials said. 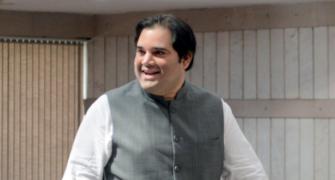