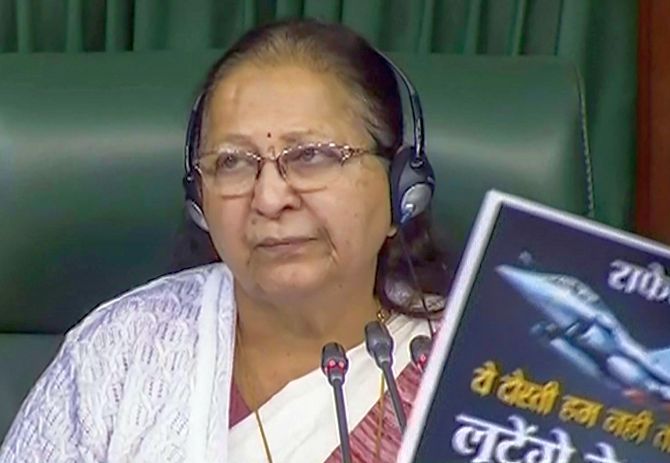 The speaker had last week suspended 45 members for unruly behaviour.

The winter session of Parliament is scheduled to conclude on January 8.

The members started their protests as soon as the House met this morning, forcing Mahajan to adjourn proceedings.

AIAMDK MPs K N Ramachandran, P Venugopal and K K Gopal were protesting over proposed construction of a dam by Karnataka on the Cauvery river while TDP MP Naramalli Sivaprasad, whose party has been raising the issue of special status to Andhra Pradesh, played a Tamil song in the house.

Sivaprasad, known for sporting different costumes in the House, was dressed like former Tamil Nadu chief minister M G Ramachandran and held a whip in his hand.

As the House reconvened at noon, the members continued to protest in the Well despite warning from the Speaker. Sivaprasad this time was seen playing Khartal, a percussion instrument mainly used for devotional songs.

Mahajan ordered suspension of the four members for "abusing the law of the House".

AIADMK MP M Thambidurai, who is also the deputy speaker, urged Mahajan to revoke the suspension of his party MPs for their behaviour.

He said the Speaker has the power to take action against them, but added that they were raising issues that concerns the state's welfare.

As many as 24 AIADMK members were suspended last Wednesday. On Thursday, Mahajan suspended 21 members of AIADMK, TDP and an 'unattached' YSR Congress member. Action against such a large number of MPs is unusual. 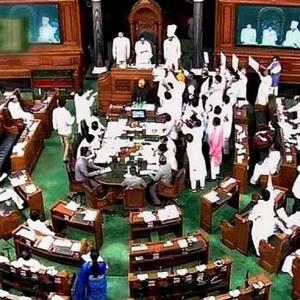