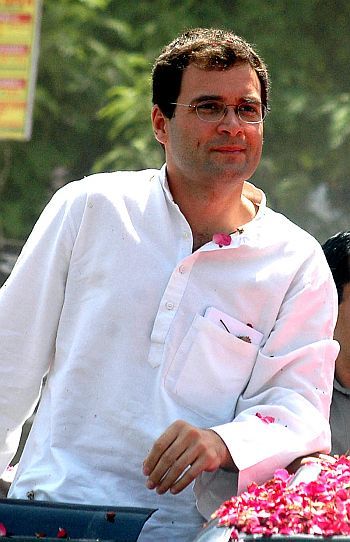 Rahul Gandhi on Saturday filed his nomination papers from Amethi constituency which he has represented in Lok Sabha twice and expressed confidence about retaining it for the third straight time.

The Congress vice-president was accompanied by his mother and party president Sonia Gandhi, sister Priyanka and her husband Robert Vadra when he filed nomination papers before the returning officer in Amethi.

Later, interacting with media he expressed confidence about victory from the constituency in Uttar Pradesh, the Nehru-Gandhi family pocketborough where the Bharatiya Janata Party has fielded Smriti Irani and Aam Aadmi Party has Kumar Vishwas.

He said he has family relations with Amethi and "we will have a good victory."

Rahul said he had focussed on three things for development of Amethi -- working with women bodies, connecting the area with national highways and railways and developing food park.

He will focus on these issues in the future also to generate more employment for youths, he said.

Rahul along with Sonia, Priyanka and Vadra reached Amethi after conducting a roadshow through adjoining Sultanpur where his cousin Varun Gandhi is contesting on a BJP ticket.

The event evoked curosity as this is for the first time Rahul is organising such a political campaign from Sultanpur constituency where another Gandhi family member if fighting against a Congress candidate.

The Nehru Gandhi scion also rejected criticism that he made a personal attack against Narendra Modi by referring to his marital status, saying he just stated that he had previously not mentioned about his wife in poll affidavits.

"I did not get personal. I just stated that on his affidavits he had previously not mentioned something. So it's not a personal thing," he told reporters in Amethi soon after filing his nomination papers for the Lok Sabha polls.

He was responding to a question on his raking up the marital status of Modi while addressing a rally in Jammu and Kashmir yesterday.

He said Congress had been written off by the opinion polls in 2004 as well as 2009 but those did not prove to be correct.

"They (opinion polls) kept saying Congress will lose but you know what happened," he said, referring to his party's unexpected victories in last two Lok Sabha elections.

Asked about polarising statements made by leaders of various political parties, he said attempts to polarise elections take place every time and Congress will take everybody along.

Rahul's cousin Varun Gandhi is the BJP candidate from Sultanpur. He is pitted against Congress nominee Amita Singh, wife of Rajya Sabha MP Sanjay Singh, who had won from the seat in 2009.

Rahul's roadshow covered 16-km distance in Sultanpur parliamentary constituency. Locals say it is quite unusual that a Gandhi family member is carrying out such a political procession in support of party candidate against another family member. They have so far refrained from campaigning in each other's constituency.

Amita along with husband also received Gandhi at the airport in Sultanpur and accompanied him in the roadshow.

Varun, who is the son of Maneka and Sanjay Gandhi, had contested the last Lok Sabha seat from Pilbhit and won by over 3 lakh votes. After shifting to Sultanpur seat, he has been reaching out to people telling them that Sultanpur was the 'karmbhoomi" of his late father.

Varun has not mentioned BJP prime minister pick Narendra Modi's name in his campaigning so far. Neighbouring two constituencies are represented by Sonia and Rahul.

The Gandhi family travelling in a white SUV received a warm welcome from people who showered flower petals and raised slogans in their favour.

Sonia and Rahul Gandhi paid a visit to a local resident Kamruddin in Panha village and asked about his family's well being.

In an informal chat in Dhammaur area, Priyanka was queried about BJP fielding Smriti Irani against Rahul.

"Everyone who comes to Amethi is welcome. There is an arrangement in democracy for everyone to contest election", she said.

When asked whether she expects Rahul to win by bigger margin, she replied "it will all be known later". 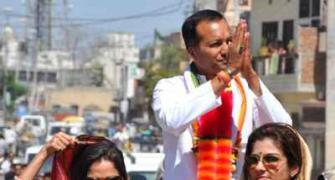 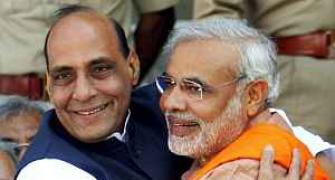 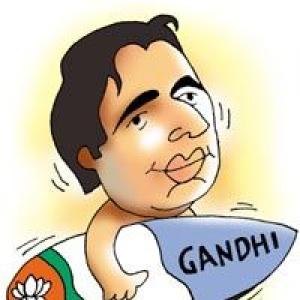 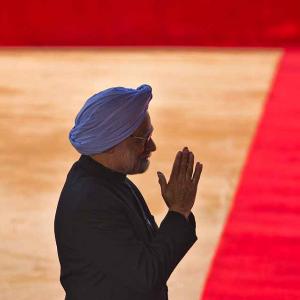