The fourth phase of Lok Sabha elections began on Saturday, covering seven constituencies in four states where over half-a-crore voters decide the fate of 74 candidates.

The states which are being covered in this phase are Goa, Assam, Tripura and Sikkim.

Voting crosses 40 per cent mark by noon in Goa

Over 40 per cent votes were cast till noon in Goa, where long queues seen outside polling booths in morning almost disappeared due to intense heat.

Chief Minister Manohar Parrikar was among the early voters in Goa, which has 10,60,777 electors, including 5,32,469 women, spread over its two Lok Sabha seats – North Goa and South Goa.

People lined up before the booths in large numbers during the first three hours of polling, which began at 7 am, but as the day progressed the queues got shorter due to excessive heat.

Parrikar exercised his franchise at a polling booth in Panaji.

Besides Congress and BJP, Aam Aadmi Party and Communist Party of India (CPI), among others, are also in the fray in Goa, where women voters outnumber men.

A total of 1,624 polling booths have been set up in the coastal state. Fourteen of them have been identified as "vulnerable" and 30 as "critical" and adequate security has been provided to them to avoid any untoward incident, the officials said.

The polling will conclude at 6 pm.

54 per cent voting in Assam till 3 pm

A total of 54 per cent votes were cast till 3 pm for the three Lok Sabha seats in Assam where polling is on in the second phase on Saturday.

EVM malfunctioning was reported in Autonomous District and Karimganj constituencies. The machines were later replaced and voting continued uninterrupted, the sources said.

Voters, including women and youth, formed long queues before the 3698 polling booths of the three constituencies an hour before polling began at 7 am.

Over 70 per cent polling in Tripura till 3 pm

"The percentage of polling will cross 70 per cent. Computation of all votes of all the 30 assembly segments in this constituency is yet to be completed," Returning Officer Prashant Kumar Goel said.

Eleven EVMs malfunctioned during the poll process which were replaced immediately, he said adding no untoward incident was reported.

The constituency had recorded 83 percent voter turnout in the last Lok Sabha election.

A turnout of 52.5 per cent was registered in the Himalayan state of Sikkim till afternoon on Saturday for 32 assembly seats and the lone Lok Sabha seat.

Among the six contestants for the Lok Sabha seat was Tek Nath Dhakal of the newly-launched Sikkim Krantikari Morcha who was pitted against sitting SDF MP Prem Das Rai.

There are 121 contestants for the 32 Assembly seats.

Of the total assembly seats, two are reserved for SC and 12 for the Bhutia and Lepcha communities.

Image: Voters flash their ID cards before as they queue up to cast their ballot, at a polling booth in Diphu, about 250 kms from Guwahati, on Saturday 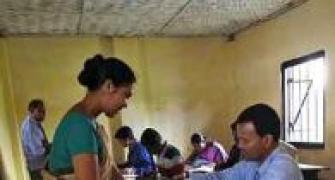 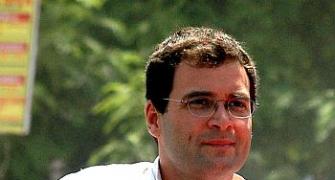 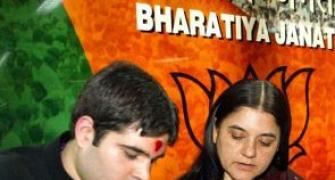 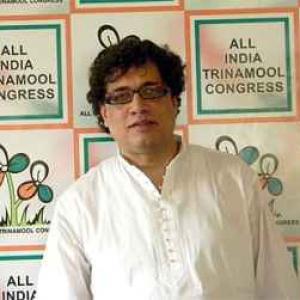 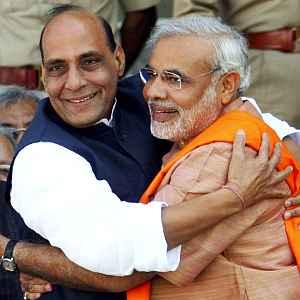