Aggressive campaigning and the existing ‘Modi wave’ and a lack of will on part of the Congress has put the ruling Bharatiya Janata Party in Rajasthan far ahead of others. The party is comfortably placed in 21 out of the 25 seats, and they have been able to do this because of maintaining the same tempo that enabled them to defeat the Congress badly in December’s assembly elections. P B Chandra reports

In 2009, the Congress performed well after forming a minority government in the state under former chief minister Ashok Gehlot and won 20 out of the 25 seats. The BJP won four and one seat went to an independent.

"Thus with the BJP in power, the situation is the same, but in the BJP's favour. This has been a trend in the state since 2003. In 2009, when the Congress got 20 seats, it pulled 47.19 per cent votes while the BJP lagged behind with 37 per cent. In 2003, the BJP was in power and won 20 seats. Thus, the electors who overwhelmingly supported the BJP would show the same spirit as the Lok Sabha elections are being held only after four months after the assembly elections. Thus, the political hangover continues,” says analyst Om Saini.

A study of the voting trend since1998 reveals that if the Lok sabha elections are held within just a year after the Vidhan Sabha elections, the ruling party in the state manages to get 10 to 14 per cent more votes, which translates into a thumping victory for them.

Among the key constituencies in the state, the Barmer seat is attracting a lot of attention because of the presence of independent and BJP rebel Jaswant Singh, especially after his son Manvendra, who is a BJP member of legislative assembly was removed from the party's national executive after his father rebelled.

The contest in Barmer is triangular, and apart from Jaswant Singh and the BJP’s Sonaram Choudhry, sitting Congress Member of Parliament Harish Choudhry who is a Jat, is also in fray. Jaswant’s only hope here is in the sharp division of the Jat votes and overwhelming support of the Muslims and the Dalits.

The Congress, after the crushing defeat in the December's assembly election is tottering and its morale is low.

Jaipur (rural): All India Congress Committee general secretary C P Joshi is facing Olympic silver medalist Rajyavardhan Singh Rathore. Joshi, who had a key role in ticket distribution, himself chose to switch his constituency from Bhilawara to Jaipur (rural) as the constituency has large presence of Brahmin votes. This seat was vacated by Union Minister of State Lal Chand Kataria, a Jat who is actively campaigning for Joshi in the predominantly rural seat.

Joshi’s opponent Rathore is a novice and is backed by Chief Minister Vasundhara Raje and will have to deal with the caste factor like Joshi. Joshi enjoys a certain edge, but could find himself on the wrong side if a Modi wave persists.

Ajmer: Union Minister and Pradesh Congress Committee president Sachin Pilot is finding the going very tough to retain his seat from Ajmer. Pilot is banking on the Gujjar votes, but the BJP has fielded Irrigation Minister Sanwar Lal Jat, since the Jat presence in this constituency is considerable. The Muslims, Scheduled Castes, Brahmins and Baniya votes would decide the ultimate winner. The contest is fierce and the outcome is difficult to predict. Sachin is popular with the youths, which had made him a winner in 2009. But 2014 is a different proposition.

Jalore-Sirohi: This constituency has seen a large number of rank outsiders winning the seat. In the past, the seat was sold to rich businessmen who were ready to fund the party’s election fund. Former Union Minister Buta Singh, 79, who was sent by the Congress in 1984 to contest from here because of the insurgency in Punjab, was considered a political refugee, but he made Jalore his permanent abode. He is in the fray again as an independent. He won four times earlier as a Congress candidate and once as an independent.

In 1998, he won as an independent and lost by a narrow margin to Devji Patel of the BJP in 2009. This time, the Congress has fielded Udai Lal Anjana a tainted former MLA. The seat has very large number of SC voters, and Buta Singh is banking on the Dalit support for doing the turnaround.

Jodhpur: The city which has given three chief ministers including Ashok Gehlot is not witnessing any excitement because both the princesses, Union Minister Chandresh Kumari Katoch, sister of former ruler of Jodhpur Gaj Singh and her BJP opponent, a ‘commoner’ Gajendra Singh Shekhawat are Rajputs. In this constituency, the Jats and the Bishnoi are keys for the electoral success.

But both castes are not active as the major parties have opted for a Rajput candidate. Kumari is accused of neglecting the constituency. She is banking on the support of Ashok Gehlot who has won this seat on five occasions. But the ‘pauper’ Shekhawat enjoys an edge here.

Chittorgarh: Union Urban Development Minister Girija Vyas is contesting against a weak BJP candidate, Chandra Prakash Joshi. Both Vyas and Joshi are Brahmins and the Rajput votes play a major role in deciding the eventual winner. This time, the Rajput community is annoyed with the BJP after it denied ticket to Jaswant Singh, who had won this seat twice. Under a changed poetical atmosphere, Vyas, a seasoned campaigner may retain this seat if she can garner Rajput support.

Jhunjhunu: late Union Minister Sis Ram Ola’s daughter-in-law Rajbala is contesting against a BJP legislator Santosh Ahlawat. A former general Raj Kadiyan is an Aam Aadmi Party candidate, and is banking on a large number of ex-servicemen votes and Muslims. But Rajabala enjoys an edge.

In Sikar, the contest is triangular. The BJP has fielded Swami Sumedhanand Saraswati . But former Union Minister Subhash Maharaiya, a BJP rebel has caused ripples here. The Congress’ P S Jat is a weak candidate and actual contest is between Swami and Mahariya.

In Jaipur, sitting Congress MP Mahesh Joshi is not getting the active support of the party and is finding the going tough even against a weak BJP candidate, Ram Charan Bohra. There is no excitement in the state capital where the campaign is low-key by both the parties. Jaipur is known to be a strong saffron bastion. 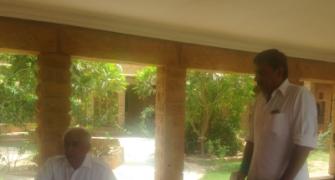 For Jaswant, technology, music and family fill the gap left by BJP 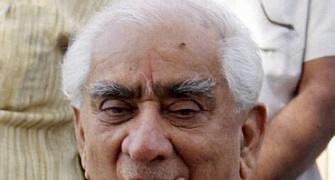 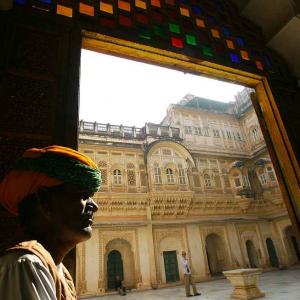 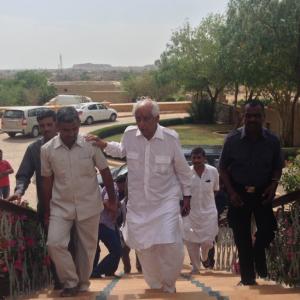