Modi's invite to Sharif an insult to my husband's sacrifice: Widow 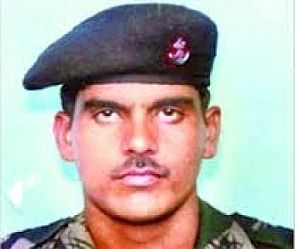 The invitation extended to Nawaz Sharif for Narendra Modi's swearing-in ceremony has not gone down well with the widow of martyred Indian soldier Hemraj, who has demanded that the Pakistan premier either bring back her husband's head or condemn the barbarous killing.

"Sharif should either bring the head of my husband or should publicly condemn the barbarous act of Pakistani soldiers who had beheaded my husband," Dharmvati, the widow of Hemraj, said.

Lance Naik Hemraj was killed and beheaded by Pakistani soldiers on January 8 last year in Poonch sector of Jammu and Kashmir.

"In fact Modi should not have invited Sharif. I had voted for BJP since Modi in his election speech in Mathura, not only condemned the inaction of Manmohan government in the matter but had even challenged Pakistan then," she said, adding the BJP government's invite to Sharif is an "insult" to the sacrifice of a soldier.

Asking why India has not taken revenge for the act so far, she claimed, "Gen V K Singh had then even promised to take revenge".

Dharmavati is planning to go on fast from Monday to protest Sharif's presence in the country.

"I would go on fast from May 26 and continue till Sharif is in India. If he does not regret the act of his soldiers, it would be deemed that he has not changed," she said.