Late Bismillah Khan's family refuses to back Modi in Varanasi

From music to politics. The family of late shehnai maestro Ustad Bismillah Khan has been dragged into the political battleground after Bismillah’s grandson was approached to become a proposer for Bharatiya Janata Party nominee Narendra Modi when he files his nomination for the Varanasi Lok Sabha seat on April 24.

However, Bismillah’s grandson Affaq Haider refused to do so, saying they did not want to be associated with any political party. Varanasi will go to poll on May 12 with Modi, Congress candidate Ajay Rai and Aam Aadmi Party leader Arvind Kejriwal in the fray.

“We got a phone call from BJP Mayor Ramgopal Mohale on April 16 who expressed his desire to meet us. My father Ustaad Zamin Hussain, and our family friend Shakeel Ahmed went to meet him at his residence. We thought that he wanted to arrange some cultural programme but he told us that Modiji has sent some people from Gujarat especially to meet us, as he wants Zamin to be his proposer along with the grandson of Pandit Madan Mohan Malviya,” said Haider.

“We told him that we will take a decision after consulting family members. He then gave us a day’s time. We politely told him that we cannot be Modiji’s proposer as neither Bismillah was involved with any political party nor do we wish to. Bismillah used to say that you can talk to me for hours about music but keep me away from politics,” he added.

When contacted, the Varanasi mayor said he shares a warm relationship with the shehnai maestro’s family but denied that he had approached the family members to stand as Modi’s supporter. However, he added that the Ustad’s family often visits his house as they share a cordial relationship.

Haider said he and his father never refuse any invitation for a cultural programme for any political party, including the BJP, but won’t let Bismillah’s name be dragged into politics. “Political parties remember the Ustad only during elections and after that no one bothers about him. You can see that after eight years of his death his mausoleum is yet to be built despite tall promises,” he rued.

When asked if Modi or Kejriwal have met them, he replied in the negative. “No, not yet but we have heard that Modi plans to meet our family and visit Bismillah’s mazar on April 24, the day he is filing his nominations. As far as Kejriwal is concerned, he has mentioned Bismillah’s name in his speeches but has not met us till now,” he said.

Image: Ustad Bismillah Khan performing at a concert in 2003. 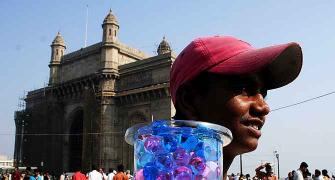 'When he plays, the soul reverberates'