The President meets a legend 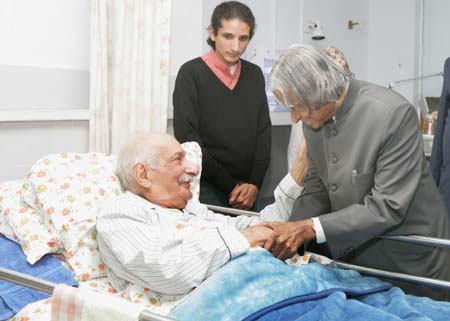 President A P J Kalam called on the ailing Field Marshal SHF J Manekshaw, MC at the Military Hospital,Wellington, near Ooty on Saturday.

Sam Manekshaw is one of only two Indian military officers to hold the highest rank of Field Marshal. In his celebrated career of four decades, Manekshaw has fought in five wars, including World War II.

The President spent about 15 minutes with the 93-year-old, who he called 'a great son of India', and a person he admires. Kalam asked doctors to 'look after' Manekshaw, who suffers from various age-related complications.