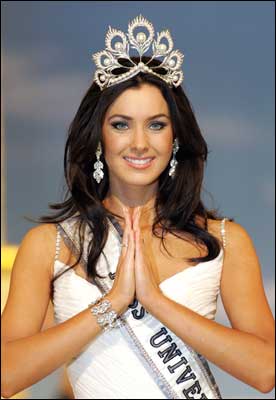 Natalie Glebova, Miss Canada, has been crowned Miss Universe 2005 in Bangkok at the glittering beauty pageant.

Miss Canada is a 23-year-old motivational speaker from Toronto. She succeeded last year's winner, Australian Jennifer Hawkins, after going through a series of rounds which included the swimsuit parades and evening gown round.

"This is all happening too fast and it's unreal. It's slowly starting to sink in," Glebova said.

years ago and she thanked her new country to have given them the opportunity to live and succeed.

The pageant weathered some controversy when bikini-clad contestants posed in front of Bangkok's famed Wat Arun, or 'Temple of the Dawn,' and caused outrage among religious traditionalists who said they were an affront to Buddhism.

India's Amrita Thapar made it only to the last 15.