Spelling fresh trouble for former Karnataka chief minister B S Yeddyurappa, the Lokayukta police on Saturday filed an FIR against him, Housing Minister V Somanna and two others, alleging irregularities in denotification of land.

"An FIR has been filed against Yeddyurappa and Somanna, mainly under the provisions of the Prevention of Corruption Act and also for misappropriation, breach of criminal trust and forging documents," City Lokayukta Superintendent of Police Shivashankar said.

The FIR was filed following Lokayukta Court Judge N K Sudhindra Rao's directive to Lokayukta Superintendent of Police (Bangalore Urban) to conduct a probe under relevant sections of the CrPC and submit his report on December 26.

The complainant, Ravi Krishnareddy, a software engineer, alleged that Yeddyurappa denotified 22 guntas (one gunta is about 1086 square feet) of land in Nagadevanahalli in 2009 to an education trust owned by Somanna's wife in violation of rules.

The land had already been acquired by the Bangalore Development Authority in 1998, he submitted, adding that a building constructed by the trust on it is "illegal" as it had not been accorded permission.

Shailaja and Lingaraju, the erstwhile land owners, are the two other persons named in the complaint.

Yeddyurappa, who has been facing five complaints, has secured bail in two, paving the way for his release from jail on November 8 after a 25day-long stay. 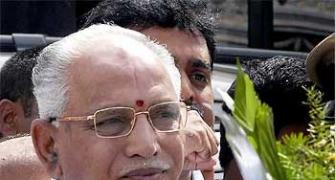 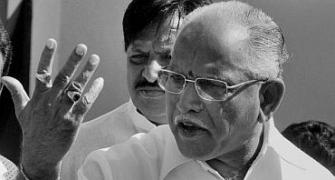 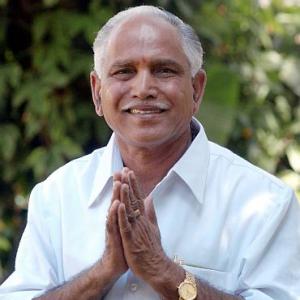