News
Business
Movies
Sports
Cricket
Get Ahead
Money Tips
Shopping
Sign in  |  Create a Rediffmail account
Rediff.com  » News » 'Like Indira in '71, Modi can be credited for Balakot'

'Like Indira in '71, Modi can be credited for Balakot'

'Can any nation claim, guarantee that there will be no terror strike?' "In 1971, when Prime Minister Indira Gandhi defeated Pakistan, and our leader, A B Vajpayee, who was in the Opposition, praised her, and she was credited with the military victory, similarly, why can't Prime Minister Narendra Modi be credited for the Balakot air strike?"

So says Home Minister Rajnath Singh in an interview to senior journalist Sheela Bhatt of NewsX.

About the Pulwama terror attack on Modi's watch, Singh "Can any nation claim, guarantee that there will be no terror strike?"

"Talking about Pulwama terror strike, no intelligence department anywhere can claim that its inputs will be perfect. They are also humans. You can't just condemn them. Our people are so good that we even alerted Sri Lanka about the Easter Sunday suicide attacks. Shouldn't we appreciate them," he asks.

About the NDA government's Kashmir policy, he says, "I can claim with total honesty that no home minister has visited Kashmir as many times as I have. And we tried an experiment there (referring to the alliance with People's Democratic Party), but it didn't work. Sometimes things succeed, sometimes they don't."

When asked about the possibilities that open up if the Bharatiya Janata Party secured around 200 seats in the Lok Sabha elections, Singh says, "The BJP will win more seats than we won in 2014. It cannot be ruled out that NDA will get two-thirds majority." 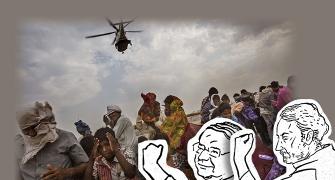 Check out the 59 seats going to polls in Phase 7