Noting that the military action by the coalition forces has significantly degraded the ability of the Libyan regime to defend itself, United States Defence Secretary Robert Gates has said the people themselves would throw Muammar Gaddafi out of power.

"In my view, the removal of Colonel Gaddafi will likely be achieved over time through political and economic measures and by his own people," Gates said in his testimony before the Senate Armed Services Committee.

Gates said the North Atlantic Treaty Organisation-led operation can degrade Gaddafi's military capacity to the point where he and those around him will be forced into a very different set of choices and behaviors in the future.

Though Gates reiterated that there is no need for US troops on the ground, US lawmakers argued that the Libyan rulers need to go as soon as possible as his stay in power any longer was not only posed a danger to US national security interests, but also to that of the world.

"If Gaddafi remains in power, wounded and angry, he will only be more of a threat to the world and to the Libyan people," Senator John McCain argued. "We can't say that we averted a mass atrocity in Benghazi only to accept one in Misurata or some other city.

That's not success. The longer this drags on, the more likely it is the greater the risk that the balance of power on the ground may shift toward Gaddafi or that some tragic event could fracture our coalition, which may be hard enough as it is to hold together over a prolonged period of time," he said.

"Under consideration is the question of whether the coalition or a coalition member or members should supply the opposition forces with lethal and nonlethal aid to enhance their ability to confront pro-Gaddafi forces. President Obama has said that he's not ruling that out or in," said Senator Carl Levin, Chairman of the Committee.

"It is important that any such decision be made with the agreement of -- or at least the understanding and acquiescence of -- our coalition partners, because of the military and political importance of maintaining broad international support for the mission," he said.

Admiral Mike Mullen, chairman of the koint chief of staff, said Gaddafi still possesses superior military capability to those of the forces arrayed against him. "He still shows every desire at retaking lost ground and, in fact, did so on Thursday.

He still wants Benghazi and Ajdabiya back. He still denies his own people food, water, electricity and shelter," he said.

Gates said the NATO-commanded alliance would continue, and the alliance will continue, to degrade Gaddafi's military capabilities. "It wasn't that long ago that there were uprisings all across Libya and Gadhafi's forces were on the defensive," he said.

Meanwhile, speculation mounted on Friday that Muammar Gaddafi's sons are willing to discuss exit strategies after a few more top Libyan officials defected, stirring talk that many others may be preparing to follow and triggering a clampdown to stop them.

Top Libyan leader Ali Abdessalam Treki, who had been named country's new envoy to United Nations, spurned the job and defected to Egypt, Al-Jazeera channel reported. Treki, a former foreign minister and ex-president of the UN general assembly who has worked closely with Gaddafi for decades, announced his exit on opposition websites, declaring "it's our right to live in freedom and democracy."

Pan-Arab channel Al-Jazeera reported that Gaddafi's intelligence chief and the speaker of the Parliament had also fled to Tunisia.

Some Arabic newspapers said Mohammad Abu Al Qassim Al Zawi, the head of Libya's Popular Committee, the country's equivalent of a parliament, is among the defectors, and reports of other defections, such as that of top oil official Shokri Ghanem, remain unconfirmed.

Media reports said guards have been posted to prevent any other official from leaving the country. Corroborating this, the defecting Libyan ambassador to the UN said, "Most high-level Libyan officials are trying to defect. But they are under tight security and having difficulty leaving the country."

These defections came as BBC said that the top Gaddafi envoy, Mohammad Ismail, has been in London for the past few days for talks with British authorities. Confirming his presence on the British soil, the foreign office said that in all its contacts with Libyan officials, it had made it clear that "Gaddafi has to go".

But the Guardian said Ismail's visit was a sign that Gaddafi's inner circle was looking for an exit strategy. The paper said the Libyan official was a senior aide to Gaddafi's favourite son Saif ul-Islam.

BBC said the visit had come in the backdrop of mounting speculation that Gaddafi's sons, particularly Saif, Saadi and Mutassim are willing to discuss exit strategies for the whole family or only the Libyan leader. News of Ismail's visit emerged after Libyan Foreign minister Moussa Koussa flew to Britain and was said to have defected.

But amid the talk of his regime crumbling, Gaddafi has struck a defiant stance saying he is not the one who should go, but Western leaders who have decimated his military with air strikes.

Gaddafi's message was run as a scroll by the state-owned Libyan television. While the Libyan strongman is defiant, the opposition leaders are saying that the regime is crumbling from within and likened Gaddafi to a wounded animal.

"An injured wolf is much more dangerous than a healthy wolf. But we hope the defections continue and I belie he will find himself with no one around him," opposition spokesman Mustafa Gheriani said in Benghazi.

Many Libyan government figures have resigned since the uprising against Gaddafi began on February 15. Interior minister Abdel Fattah Younis and justice minister Mustafa Mohamed al-Jalil have both left, as have numerous ambassadors around the world. 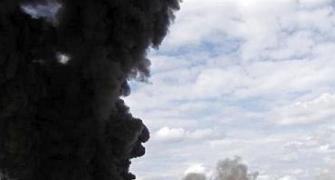 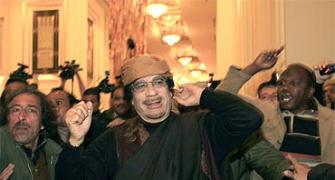 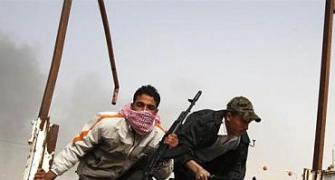 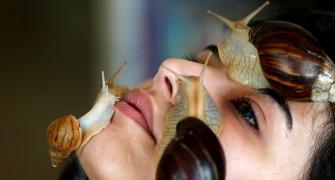 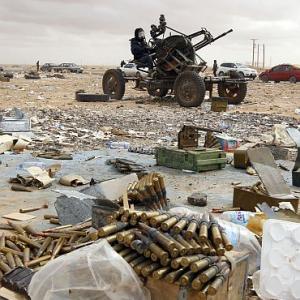