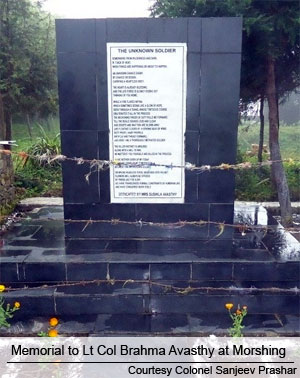 That Lieutenant Colonel Brahmanand Avasthy deserved a gallantry medal for his conspicuous bravery is unarguable, but his valour went unrecognised.

M P Anil Kumar salutes an Indian hero on the 50th anniversary of his martyrdom.

'So far, the fighting has shown that the Indians need nearly everything, except courage.' -- Time magazine, November 30, 1962 edition.

Nursing a bloody nose, the PLA bypassed Tongpeng La and stormed the defences slightly southwest, but the Sikhs dug in there and Captain Gosal were equal to the task.

Meanwhile, Major General Niranjan Prasad, the beleaguered commander of 4 Infantry Division, inferred that Tawang was indefensible against a four-pronged attack by a PLA division. He also had a hunch that the PLA would skirt the Sikhs and head straight for Se La, blow up the bridge at Jang to trap the Indian troops on the Tawang side of the river.

He ordered the army units in the Tawang sector to withdraw and muster at Se La to take on the Chinese there. The PLA occupied Tawang unchallenged.

Nothing like hindsight vision, yet one would like to inhale and wail: Given how gutsily the men of Lieutenant Kaushik and Captain Gosal stuck to their guns, if senior field commanders had shown similar spine to fight it out instead of pressing the panic button, couldn't the Indian Army have avoided being disgraced in NEFA?

There was a pause in the war after the loss of Tawang. The PLA badly needed respite to recoup, regroup, restock and reinforce, rebuild two blown-up bridges, re-lay the Bum La-Tawang track into a pucca road to smoothen the logistics and to haul the artillery.

To gain time, to pretend reasonable to the world, China proposed a sham 'friendly settlement', which Pandit Nehru waved aside outright.

The Indian Army too utilised the interlude to beef up its defences. Since the contours made it a natural rampart, the 96-km-long Se La-Dirang Dzong-Bomdila barrier was the stronghold chosen by Major General A S Pathania, the new commander of 4 Infantry Division now headquartered at Dirang Dzong, to confront the Chinese again. He had three brigades -- 48, 62 and 65 -- under him for this task.

With the war clouds glowering, troops from the rest of the country were rushed into NEFA. The Belgaum-based 4th Rajput battalion was tagged to 65, the brigade in-charge of the Dirang sector.

On arrival at Misamari, they were told about the dearth of transport, and the battalion under Major Trilok Nath, the officiating commanding officer, footed it to Dirang.

Lieutenant Colonel Brahmanand Avasthy (fondly called Brahma) was slated to take over the command of 2 Rajput, the battalion he was commissioned into, but before he could set course to Namkha Chu from Mhow, 2 Rajput had to bear the brunt of Chinese invasion.

That 282 men were killed and myriad wounded, stands testimony to how heroically they fought the pitched battle. He was reassigned to 4 Rajput.

A man of spartan traits, Brahma was a consummate professional and a soldier of the first water. He got cracking on the battalion's preparedness; he wrote to Major P L Kukrety (a company commander), among other things, where to site the machine-guns and mortars, and to the quartermaster on the logistical groundwork to keep the wheels oiled.

The Sappers Camp is located 10 km northwest of Dirang. The primary task of the Rajputs was to thwart Chinese infiltration from the east of their area clustered around the Sappers Camp.

One company was located east of the Nyukmadong ridge, another at Lubrang, and the fourth company at a place called Dangsikpu. Captain Gosal's battery emplaced mountain guns in the vicinity of Dangsikpu.

From November 14, the Indians carried out aggressive patrolling in the no man's land, but the PLA hit back with interest. The PLA had used the thaw to mass two divisions, each comprising four brigades, at Tawang.

In no time, one PLA division had the Indian 4th Infantry Division on the run.

Major K P P Nair, a company commander, led the Rajputs' combing operations, but his column and three reinforcement contingents were ambushed and suffered heavy casualties on November 15 and 16. The remnants had to beat a retreat to the base camp. 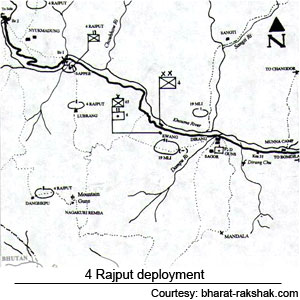 The survey of the Tibet-NEFA border to draw the McMahon Line on the map was done by two British officers, Lieutenant Colonel F M Bailey and Captain H T Morshead. The route the duo traversed during their exertions is called the Bailey Trail.

While China hotly contested the McMahon Line, a deed laden with irony was its wily army rampaging down the same Bailey Trail -- from Tulung La, Mago, Poshing La to Thembang -- cutting a swath through the rear to outflank and deliver a crushing defeat on the Indian troops camped about Dirang.

At the same time, they cut the lines of communication at various places and left many formations at the mercy of providence.

The showdown that never was

By the early hours of November 18, the jittery commanders capitulated and 4 Division caved in without putting up a fight. 62 Brigade was told to withdraw from Se La, 65 Brigade plus the division headquarters were told to abandon Dirang. They were to rally at Bomdila for the shootout.

Fuelled by rumours, panic and defeatism, what started as a tactical retreat soon gathered a disorderly momentum. Command and control dissipated, chaos reigned. The unstoppable tide of retreat had 48 Brigade keeling over at Bomdila.

In disarray, 4 Division proceeded pell-mell to Foothills (toponym). The ignominy of the debacle at Se La, Dirang and Bomdila, goes without saying, shall remain an inerasable blot on Indian Army's escutcheon.

The PLA struck it rich. A track emanating from Dirang Dzong wound towards Rupa Valley passing through Manda La and Phudung. The PLA cut off the Manda La route on the 20th and trapped the Indians using this path to flee to the Assam plains. The Chinese bushwhack inflicted a heavy toll.

With the Indian leadership reeling punch-drunk, 4 Infantry Division in full flight, China caught the Indian politico-military establishment napping once again; Peking radio announced the unilateral ceasefire by China on the morning of November 21, and notched up another diplomatic-cum-military victory.

The last stand at Lagyala Gompa

Brahma received the cue to retire to the foothills on the 18th morning. 4 Rajput was placed under 62 Brigade and bade to cover the pullout of the elements of 62 Brigade through their area and move only once the brigade had crossed them.

4 Rajput could not retreat as parts of one body. Major Kukrety's company lost its way, strayed into Bhutan, drifted back and arrived at Bhairabkund on the 24th. The column helmed by Major Nair came under hails of sniper fire, but scraped through to the foothills.

Brahma tasked the rest of his battalion to stand watch at the bridge and surrounding tract to ensure the safe passage of the decamping troops of 62 Brigade. But with the brigade neither heard nor sighted throughout the day (they had filtered through other passages), he decided to commence withdrawal on the 19th morning.

After destroying their stores, he and his men headed to Phudung from Lubrang. Stragglers from the other regiments and unarmed pioneers and roadmen tagged along as the Rajputs wended their way to Foothills. They also had to carry several wounded, Brahma himself taking care of a snow-blinded medic.

Since the PLA had set snares on the Manda La-Phudung-Rupa route, they edged cautiously towards Priyadung. Finally, on the night of 22nd, the column of about 300 crossed the river Rupa and scaled upland. They had by now tramped two-thirds of the distance to the plains.

Here the track bifurcated. One column took the east fork along a stream to Morshing. The west fork crept upwards to the monastery of Lagyala Gompa (located on a spit of highland overlooking the Morshing Valley) and then linked up with the main track to Morshing. The Rajput column led by Brahma took the west fork.

The lay of the land made the precincts of Lagyala Gompa a deadly killing field. It was advantage PLA as they had arrived two days earlier and entrenched themselves on commanding crests.

At about 10 am on the 23rd, Brahma and his famished-and-exhausted men were pounced upon by the almost regiment-strength enemy waiting in ambush. As the Chinese mortar shells exploded and gunfire rang out, the Rajputs instinctively returned fire.

Although they were vastly outnumbered, Brahma decided to fight it out rather than skittering their way out of the firefight.

Thinking on his feet, Brahma surprised the Chinese with a well-crafted two-pronged counterstroke. Even as the fierce gunfight raged on, he tried to squeeze out the wounded and non-combatant stragglers from the arena, but the Chinese had sealed all escape routes.

As their dead heaped up, in a desperate manoeuvre, the enemy cornered Brahma, but the made-of-sterner-stuff Rajputs felled scores of Chinese in the counterpunch. With the ammo running out, it is believed that Brahma and the phalanx of Rajputs engaged the Chinese in close quarter combat, twice, but were subdued in the end by superior weapons and the brute strength of the enemy.

The pall, finally, descended on the over-three-hour gallant stand to breach the siege. All the Indians died with their boots on. The enemy paid dearly with fatalities exceeding 200.

Major Kukrety visited the battlefield on December 11, 1962. The PLA had dug a mass grave at the site where 140 bodies including those of Brahma, Major Trilok Nath and five other officers were found. Another 10 bodies were discovered along the Wangle-riverside beneath the Lagyala overhang.

The PLA had erected a board with an arrow pointing towards the burial pits at the ambush area, but consciously omitted the date of obsequies. That would have exposed the Chinese duplicity as the ambush was premeditated despite the loud declaration of ceasefire two days earlier.

Major Kukrety recovered a blood-soaked letter from Brahma to his wife.

That Lieutenant Colonel Brahmanand Avasthy deserved a gallantry medal for his conspicuous bravery is unarguable, but his valour went unrecognised. On the fiftieth anniversary, will Army Headquarters revisit Lagyala Gompa and honour him appropriately? 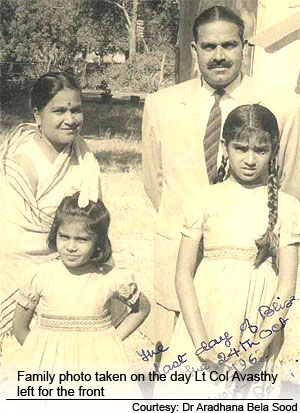 Left: A salute to the Avasthys

Weighed down with the responsibility of rearing eight-year-old Neeharika and four-and-a-half-year-old Aradhana, Sushila could barely mourn the loss of her husband Brahma. She took the blow on the chin.

Dissembling her grief, she soldiered on, and provided top-class schooling to the girls by the sweat of her brow. And she was as relentless in her pursuit of an acknowledgement of her husband's valour from the army.

Both the girls excelled by dint of hard work. Neeharika married Milan Naidu, an army officer. Her kid sister chose medicine. Yes, they are Neeharika Naidu, the famous singer, and Dr Aradhana Bela Sood, the renowned and respected doctor in the US.

Junior too found his calling in the profession of arms. Nikhil Naidu is an ace helicopter pilot in the IAF.

The locals venerate Brahma, and remember him as 'Tiger Sahib'. To sanctify his bravery, they raised a cairn in Morshing. Later the army stepped in and built the present memorial. The epitaph on the tombstone titled 'The Unknown Soldier' is by, who else but Sushila Avasthy.

While Brahma became a war hero, the vicissitudes made Sushila a worthy heroine, but this stouthearted lady is no longer amongst us. She passed on to the next world on February 16, 2010. Heeding her wish, her ashes were sprinkled at the Morshing memorial. She rests in peace beside Brahma.

You can read more about M P Anil Kumar in this feature: A pilot who is a fighter

'We were told that the Chinese will come in waves'
NEVER forget the valour of the Indian soldier!