A massive crackdown on sleeper cells of Lashker-e-Tayiba was being carried out nationwide and along the friendly neighbouring countries and three such modules were busted so far, which included the terror group's nefarious design to target Hyderabad's HITEC city.

Raids were being carried at nearly a dozen places throughout the country following reports of sleeper cells of LeT mushrooming in suburban and urban areas, government sources said.

The three modules busted by security agencies included LeT's plans to target the HITEC City, a major IT township Hyderabad, and the office of a multinational audit firm.

Mohammad Zia-ul Haq, who was arrested on Monday following a tip off by National Investigation Agency, was directed by his LeT handlers to bomb the Hyderabad office of Deloitte Touche Tohmatsu, one of the four largest auditors in the world, and was in the process of carrying out the plan, the sources said.

Haq works as a driver for a taxi service hired by Deloitte Touche Tohmatsu. Besides, Haq had been tasked to carry out an attack at the Hyderabad Information Technology Engineering Consultancy City, spread over 151 acres and at the centre of the information technology industry in the Andhra Pradesh capital.

He has already procured the explosives supplied by LeT to carry out the attack, the sources said. Haq first came in contact with LeT when he went to Saudi Arabia in 1995.

In 2002, following the Gujarat riots, he went to Pakistan and underwent terror training in Karachi and Pakistan occupied Kashmir capital Muzafarabad.

He got training in handling explosives and fire arms including AK-47 and was assigned to cause explosions in crowded areas. Though he soon returned to India, he was keeping low and was working with various travel companies as taxi driver in Hyderabad.

Haq had allegedly carried out the bombing at Odeon cinema in Hyderabad in 2006 through explosives supplied by LeT through an operative from Jammu and Kashmir.

The second module was busted by the Jammu and Kashmir police on Sunday with the arrest of Umar Zargar, a Kashmiri youth, who had made telephone calls at the behest of LeT warning that blasts will be carried out in crowded markets of Delhi.

The third module of LeT was busted with the arrest of a Kashmiri man in Kathmandu. However, no further details were available so far on his arrest. 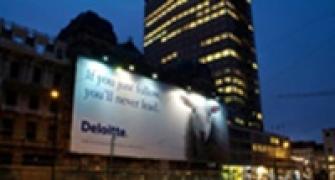 Deloitte to hire over 4,000 in 3 years
Omar blames separatists for civilian's death