Two terrorists, including Lashkar-e-Taiba commander Umar Mushtaq Khandey, were killed in an encounter with security forces in Pampore area of Jammu and Kashmir's Pulwama district on Saturday, a senior police officer said. Khandey was allegedly involved in the killing of two policemen here earlier this year.

"LeT #terrorist Umar Mustaq Khandey who martyred our 2 colleagues SgCT Mohammad Yousf and Ct Suhail Ah in Baghat Srinagar while they were having tea, #neutralised in Drangbal, #Pampore. Amongst various other crimes of the terrorists, this stands out as most unforgivable," Inspector General of Police, Kashmir, Vijay Kumar said in a tweet.

"We are committed to #hunt down these #terrorists who try to create fear among masses and spread mischief & tumult in the valley. Such elements and their name should be excised from society," he said.

Another unidentified terrorist was also killed in the Pampore encounter, a police official said, adding that arms and ammunition were recovered from the spot.

Khandey's name figured in the list of top 10 terrorists who the security forces were targeting since the hit list was released by the police in August this year. 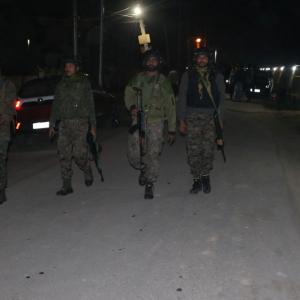