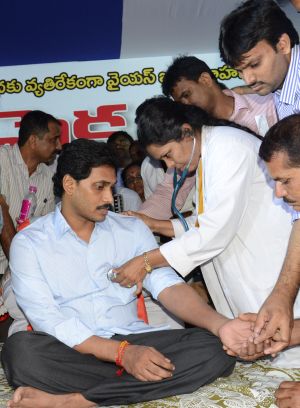 In a late night crackdown, police on Wednesday evicted YSR Congress Party president Y S Jaganmohan Reddy from the venue of his indefinite hunger strike called to protest bifurcation of Andhra Pradesh as doctors voiced concern over his deteriorating health.

"We lifted him (from his residence Lotus Pond in posh Jubillee Hills in Hyderabad where Jagan was on fast) and are taking him to Nizam Institute for Medical Sciences Hospital on doctors' advice," said DCP (west zone) V Satyanarayana.

A team of policemen swooped on Jagan's house at around 2300 hours, demolishing the barricades set up by his supporters around his fast venue, and bodily lifted him before putting him into an ambulance and taking him straight to the hospital.

There was no resistance from Jagan's supporters at the time of the police action.

YSRCP senior leader Konatala Ramakrishna said "we wanted Jagan to call off his fast and again the lead the party".

Doctors, who examined Jagan earlier on Wednesday, advised him to call off the hunger strike as his sugar level was falling, Ramakrishna told reporters in Hyderabad.

Jagan launched his indefinite fast on October 5 to press for a unified Andhra Pradesh.

He had undertaken a hunger strike when he was in a jail in Hyderabad last month on the Telangana issue.

Konatala said Jagan has appealed to all parties to join hands in keeping the state united as the division is aimed at short-term political gains being "engineered by Congress and Sonia Gandhi to make Rahul Gandhi the prime minister".

A doctor from the hospital said Jagan was refusing to take treatment but he will be given treatment forcefully after efforts are made to convince him for some more time.

Meanwhile, Jagan's mother Vijayamma and other YSRCP leaders went to the hospital to enquire about his condition.

Congress MP from Anantapur, Ananta Venkatrami Reddy had visited Jagan earlier in the day before he was taken to hospital.

Image: Doctors checking the health of a fasting Jaganmohan Reddy in Hyderabad on Tuesday 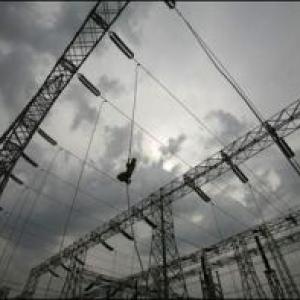 No respite for Andhra as it faces cyclone threat 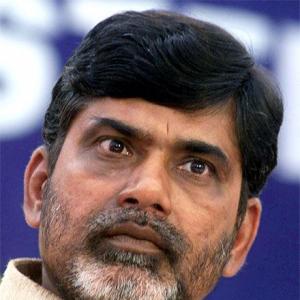