There is a larger conspiracy behind Jammu and Kashmir Police officer Davinder Singh's arrest, the Congress alleged on Tuesday, asking the prime minister and the home minister to order a thorough probe.

The Opposition claimed that Singh "cannot be a standalone carrier", with the Congress's leader in LoK Sabha, Adhir Ranjan Chowdhury, saying the question will now arise who were the real culprits behind the last year Pulwama attack.

Taking a swipe at the Rashtriya Swayamsevak Sangh, the Bharatiya Janata Party’s ideological mentor, Chowdhury said had police officer Davinder Singh been "Davinder Khan", the reaction of the "troll regiment of the RSS" would have been different.

Congress chief spokesperson Randeep Surjewala said, "There is a larger conspiracy. At whose instance was Davinder Singh acting and bringing terrorists to Delhi, as reported."

Police on Saturday had arrested Singh, a deputy superintendent of police, at Mir Bazar in Jammu and Kashmir's Kulgam district, along with Hizbul Mujahideen terrorists Naveed Baba and Altaf, besides an unidentified lawyer who was working as an overground worker for terror outfits.

Surjewala said these are questions that prime minister and the home minister need to answer, as Davinder Singh "cannot be a standalone carrier".

The Congress spokesperson said Modi and Shah should take note of this entire issue and carry out a thorough investigation into the entire episode.

He also asked who Singh was, who was he linked to and what connection he has with the Hizbul Mujahideen and other terrorist groups.

"I find this story preposterous and I find his explanation hogwash," he said.

"For how long has he been acting as a conduit for JK terrorists and other terror factories. Was Davinder Singh connected to the 2001 Parliament attack. What is Davinder Singh's connection with the Pulwama attack, where he was posted as DSP, and 42 of our soldiers lost their lives," the Congress leader asked.

"What is this conspiracy is what the nation wants to know," Surjewala asked, alleging that Singh was the same officer who was posted in Pulwama when the attack happened.

He also asked as to where did the RDX in Pulwama attack come from.

"Had Davindar Singh by default been Davindar Khan ,the reaction of troll regiment of RSS would have been more strident and vociferous. Enemies of our country ought to be condemned irrespective of colour, creed and religion," Chowdhury said on Twitter.

The Congress leader also said now, the question will arise who were the real culprits behind the Pulwama attack.

"The chink in the armour is exposed in the Valley much to the consternation of us, we can not afford ourselves to be penny wise and pound foolish," he said.

"Now, question will certainly be arisen as to who were the real culprits behind the gruesome Pulwama incident, need a fresh look on it," Chowdhury said. 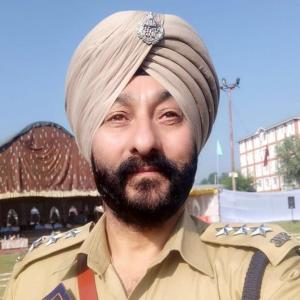