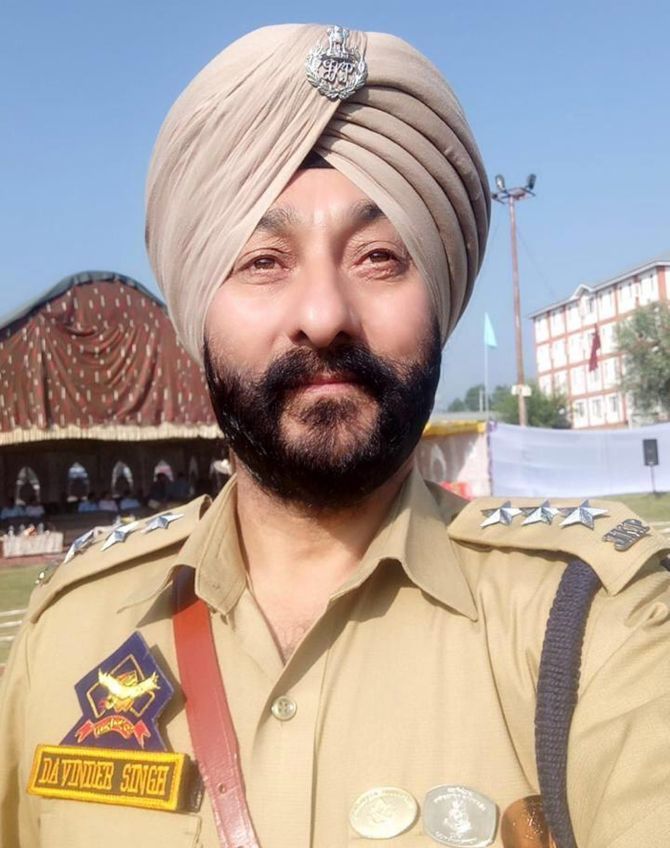 A senior police officer, posted with the strategic anti-hijacking team at Srinagar airport, was arrested along with two terrorists whom he was ferrying in a car in Kashmir Valley, a top police officer said in Srinagar on Sunday.

Kashmir Inspector General of Police (IGP) Vijay Kumar said it was a 'heinous crime' and Davinder Singh was being treated at par with the terrorists and jointly interrogated by all security agencies.

To a question about whether his posting at the airport was a security breach as the officer was also seen with the envoys of various countries who visited the valley earlier this week, Kumar said the police had no information about the officer's involvement till Saturday.

"He was on duty and how could we have stopped him from that as we had no information about his involvement in anything," he said.

The IGP said there was no record of the arrested police officer's involvement in the Parliament attack case as was being reported in a section of the media.

"We have no such records and I have no information, but we will ask him about this," he said.

While refusing to divulge details of the probe so far, Kumar said that after the news about their detention on the Jammu-Srinagar national highway in south Kashmir on Saturday spread, some militants escaped from a hideout in Shopian.

One of the arrested terrorists Naveed, who was a police constable and deserted the force in 2017 to join the Hizbul Mujahideen, has been involved in cases of killing of police personnel and civilians, the IGP told a press conference in Srinagar.

"The police officer (Singh) has worked on several anti-militancy operations. But the circumstances under which he was arrested yesterday when he was driving the car with militants towards Jammu is a heinous crime. That is why he is being treated at par with the militants," the IGP said.

"He has been properly arrested, has been brought under remand and his interrogation is on. The investigation is at an initial stage and I cannot share anything further.

"The investigation is on and we have got several leads which we will not like to share as the operation is on. When this news spread yesterday, some militants escaped from a hideout in Shopian. The hideout was eight feet under the ground which had food items among other things stored there," he said.

Giving details of Saturday's operation, Kumar said the Shopian Superintendent of Police had got a specific intelligence input that two terrorists were travelling in a vehicle on the national highway towards Jammu.

"The SP Shopian informed me and I directed DIG south Kashmir and a naka was laid. The car was searched and two wanted militants were there. A deputy superintendent of police was also there along with a resident who is an advocate and a listed OGW (overground worker) in our records," he said.

The IGP said the militants and the police officer were interrogated by the police and then all agencies, including intelligence agencies IB and RAW, working in the valley.

"I called all the security forces and agencies for a joint interrogation which is still going on. One of the militants has been identified as a top commander Naveed who was a police constable in 2017 and had decamped with four rifles from Budgam.

"He has been involved in police and civilian killings and threatening orchardists. 17 FIRs have been registered against him. He is the district commander of Shopian and 2IC of HM commander Riyaz Naikoo,” Kumar said.

He said the case has been registered into the incident under the Unlawful Activities Act and the Arms Act.

Asked if any recovery has been made from the residence of the police officer, Kumar said some recoveries have been made.

"It is a matter of investigation and the recovery has been brought into the case FIR," he said.

Asked whether his involvement with militants was a bigger security risk as the officer was posted in the anti-hijacking unit of the police at the Srinagar airport, the IGP said, "The joint interrogation is on in which all agencies -- security forces, police, IB, RAW, CID, all are involved and that has been done as this is a sensitive matter and so that no loopholes are there."

He said the owner of the vehicle is being verified.

The IGP denied allegations about Jammu and Kashmir Police's involvement with terrorists, saying 'it cannot be generalised'.

"You cannot generalise, there is no involvement of JK Police," he said, also adding that the Jammu and Kashmir Police force was at par with the National Investigation Agency to carry out the detailed probe of the officer's involvement with the terrorists. 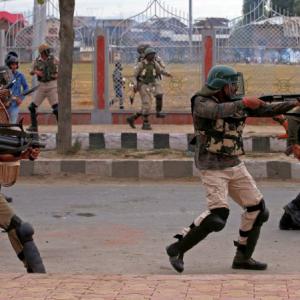